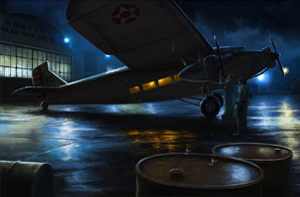 Get into Fenton's office and Huxley (propably not a relative of Aldous) shits you up, because Fenton did something wrong in the past (and saved his friend Richard, but 8 dockworkers were killed, as we will find out later).
Once Huxley finished, Fenton is brought to Gouverneur Lord Weston. He wants Fenton to take part in a rescue mission for the lost Richard. Because Richard is the Gouverneur's son and Fenton's best buddy we start off immediately.

Once we are back at the plane we talk to Gus, Fenton's mechanic, about Yen Wuan, the mapmaker. Gus thinks that maybe Shen in the bar knows more about the whereabouts of Yen Wuan. So we tell Gus to get the plane ready and steal his

bellows. Then we enter Fenton's office and pick up the

alarm clock and also the 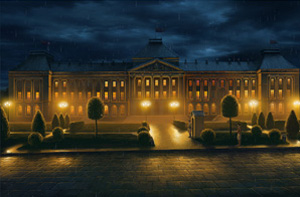 As soon as the alarm clock rings, the guard is distracted and Fenton can pick up the

ball from the tree in the middle of the screen. If we hadn't distracted the guard he would not let us step on the english grass. 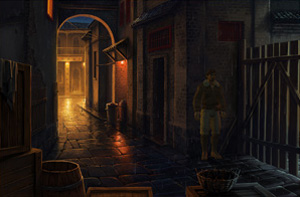 If you can't get here make sure to talk to Gus, the mechanic at the airport about Yen Wuan. Then you can access this area without problems.
As we arrive here we take a look at the swarm of flies that are circling around the small lamp. A cat jumps into action and causes so much noise that the triads that are still standing in front of the night club come to see what is happening back here. So Fenton can't do anything as long as the cat is around.
So we distract the cat by tieing the measuring tape to the ball and hanging this

construction on the rod above the cat. So we can finally take care the flies. We can just take them with us by sucking them into the bellows. So just do this.
So we enter the nightclub and talk with Shen about Yen Wuan. But Shen doesn't know much so he passes us on to the old Nianzu that is sitting around in the nightclub peacefully and is drinking his ricewine.
So we talk with Nianzu and tell him we are looking for someone. Sadly Nianzu is a bit old and needs a photograph to remember who we are talking about. And Fenton remembers he has one in the safe in his office.

So we run to Fenton's office and look into the safe. Oh noes, the combination for the safe is written on a piece of paper that Fenton keeps in his wallet, and he must have lost it while the triad people wanted to drown him in the harbor. So let's go there! 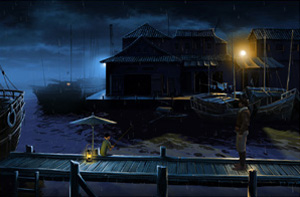 Fenton's wallet exactly in the moment we enter the scene. What coincidence. And he's not stupid, he won't give it to us just like that. After a long talk about bats Fenton is in the mood to help him catch some bats.

To give him a good bait for the bats we release the flies out of the bellows into the freedom next to the lamp that is standing there. So the boy agrees that the riddle is solved and gives us the wallet. If we look at it we will find the piece of

paper with the combination for the safe in Fenton's office written on it.

In Fenton's office we use the piece of paper with the combination on the safe and Fenton opens this thing. After a short flashback into Fenton's past and the reason he was discarded from military service without honours he will find the

We rub the picture under Nianzu's nose and after a small joke he tells us where Wuang lives.