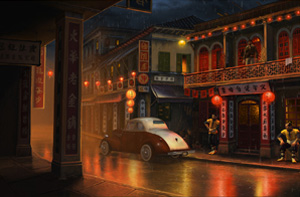 Wuang's house is now clickable on the map.
After we took the

bamboo we can knock on Wuang's door. It's the door on the left.
Sadly (or maybe luckily *drool*) he's not at home, but his niece opens the door. And so we find out the sad truth, Wuang is dead. But for that Mun Tong, the triadleader appears again and stresses around. But Kim and Fenton get rid of him and Kim tells Fenton Richard was here to talk to Wuang 3 weeks ago (shortly before he left for Tibet) and wanted to see his maps of Tibet. But what Richard got from Wuang were only copies, so Kim still owns the originals. After this is said and done Fenton can plan the escape from the flat.
So we get the

hanger from the cupboard and attach it to the bamboo. Now we walk to the window and out of the flat and fish for the

bamboo-hanger combination. Now we hang the lantern on the nailhook outside of the flat (but inside the building) to see a window in the back of the room and escape there. But you have to use the window to make Fenton realize that Kim is still missing and then talk to her to get her to come with you. 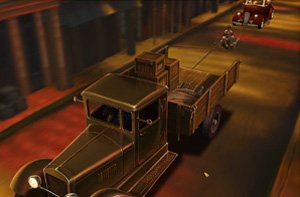 Fenton is hanging a bit uncomfortably on the truck so we better act fast before the triads think about it and just run him over.
We talk to Kim and tell her to step on the gas. A clock is shown. At once talk to Kim again and as soon as the clock reaches the 6 (or half the time) tell her to step on the breaks.
Fenton jumps onto the loading area of the truck and can keep the gangsters away from there.
At first we try to pull the broken piece of glass out of the windshield of our chasers near to Fenton with the bamboo. This works half ways. So we try again with the

broken bamboo and this time we succeed. We use the

glasshard to cut out a

rag into the bamboo. We now give the bamboo over to Kim in the truck and change players with her.
As Kim we reach for the

key on the mirror of the stolen truck and light up the rag on the bamboo with the cigar lighter. We give both the key and the

torch back to Fenton. He can use this better.
As Fenton we use the key to open the crate and pick up a lot of

fireworks. So we put the fireworks into the motor on the back of the truck and light them up with the torch. That's about it for the triads.
At the airport Fenton persuades Kim to come with him, and in no time we are in the air on our way to Tibet. 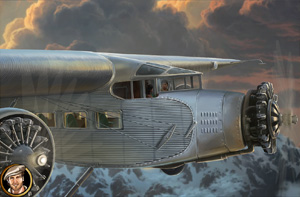 After a long dialog in which Kim finds out about Fenton's past and thinks it is okay what he did a german Messerschmitt appears and wants to shoot down the two pilots on their way to Khembalung. So we need to fight back. No problem, even though we use the peaceful way!

So, here we are, in the insides of the plane and want to shoot down the Messerschmitt. At first we pick up the

pumpkin. The we push the pumpkin into the fixture the parachute was hanging on to get a

smiley pumpkin, and then load it up with water out of the canister and some flour to get a good and slimy mixture. After we opened up the door we can throw the loaded pumpkin onto the Messerschmitt and finally got rid of the fighter plane behind us.

But what is this? Our plane also got hit, but more about that in the next chapter.