Chapter 2: The Secret in the Mountains: Inside the german camp

Chapter 2: The Secret in the Mountains

Inside the german camp 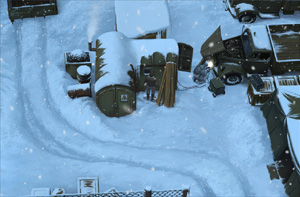 grenade inside. We sure can make good use of that so pick it up. Walk some steps to the right and you will see a soldier repairing his truck. Splash the water from the pot you of course picked up down inside the crevasse into the generator hut and as soon as the power is off the soldier is distracted for some time. But let's make sure he won't come back anytime soon, so we kick the beam in front of the truck and a chain of events will make sure the soldier is trapped inside the generator shed.
Now we enter the tent at the lower end of the screen. We can only pick up a

tent peg from the muscle soldier, besides this there is nothing else to do here at the moment. We leave the tent and now we have all the time in the world to have a look at the toolkit of the soldier we trapped in the generator house. But it won't open that easily, so we use the tent peg on it and it opens.
So what do we have here... a

saw blade in a cover. If we look at the sawblade in the cover, Fenton will take the

saw blade out of its cover. So we put some

glue on the empty cover and stick the

newspaper on it. What a nice cover for a record. So what about a record now? Oh yeah, we have a record, but it is broken. So we use the glue on it and enter a minigame where we have to rearrange the pieces of the record in a puzzle. The best idea is to start in the middle, as you can see where which part belongs by checking the label in the middle. For the rest of this puzzled record you should try to arrange the pieces according to their form. Sooner or later you will have

fixed the record. After this we open the grenade with the help of the vise and then pour the

gunpowder over the record to

cover the glue. So, let's put the record into the cover and there we go, this looks just like every other

record. What are you waiting for, enter the tent and put the record on the heap of record already there.

After the guard is knocked out Thomas tells us a lot about Richard and the Monestary. Especially, that there is a secret side entrance, and that we need to find that entrance and that the secret chamber is guarded by 2 dragons, one of them is twice as old as the other one, keep that in mind as it will be important later on. 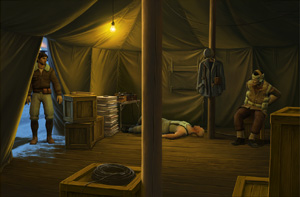 We pick up the soldier's

uniform and find a

key in the pockets of the uniform. We use the key on Thomas' handcuffs and have him free already. We also find a

tape in the uniform. So we leave the tent and put

Thomas into the truck that is waiting there especially for us. We will use it to escape the camp in a minute. The mean thing is, there is a german soldier that won't let us leave if we don't show him a form that will allow us to leave.
So we search for the form he wants to see. We use the key on the door on the left of the truck and enter the hut. We pick up the

pencil from the ground and one of these

forms in the drawer. Look at the list on the wall and then use the pencil to fill the form and write 'Eye of the Kanjur' as the object. (normally we would have to listen to the tape and find out that an object with a number is very precious and then look at the list on the wall and find out that this object is the Eye of the Kanjur, but we can save this time because of my 1337 knowledge I'm sharing with you). So we can finally give the form to the soldier and he will let us pass.

Fenton drives the truck with Thomas on it out of the camp and there Kim jumps on the truck too.

Chapter 2: The Secret in the Mountains: Inside the german camp