Fenton rushes into the professor Hayes' store but he is not there. He's in the prison of Marrakesh because he didn't pay his taxes. But who thinks about taxes in this heat anyways?
As Fenton doesn't want to do anything else besides finding Professor Hayes we have to do that. So we leave the screen with Hayes' store and leave the next screen (Bazar) to the upper left. 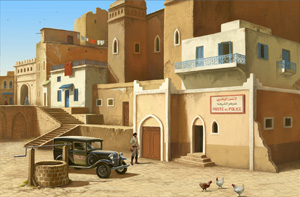 crank handle on the well here before we enter the gendarmerie. We talk to the policeman and he tells us, that he wants 200 Franc as a bail. But we don't have this money so we should get the money and to do this we leave the gendarmerie.

As we are standing in front of the door Professor Hayes calls us to his window and wants to know what Fenton wants from him, so Fenton tells him everything that happened so far. Hayes tells us, that he has the Eye of the Dragon and wants to help us. But for this we need to help him first. To make it easier to get him out of jail he gives us a

ring. And he needs his medicine for his heart.

So we better get his medicine. For this we go back to the bazar and leave the scene to the right.

Here we pick up some

crystals that are growing in the front.

In front of Hayes' shop We talk to Jamil here. He is the juweler with the red-white clothes. As we need the money really bad we sell him the ring. Well, that didn't work out as expected,

5 Franc is better than nothing, but it was a very bad deal after all. Or maybe Hayes was expecting too much from his ring, who knows.
Anyways, we get a gift certificate from him to get some juwelry polished. So as we are here already we ask him if he wants to buy the crystal we just found outside of Marrakesh. Well, he doesn't want to buy it but agrees to bevel the crystal for us because we have the gift certificate which he then keeps again. So we lost the gift certificate already but got a shiny crystal that looks like a

Here we find Monsieur Lacoste at work. We ask him about the medicine for Professor Hayes. But he refuses to give us anything before we show him a form that allows us to take stuff from the shop. But at least he gives us an 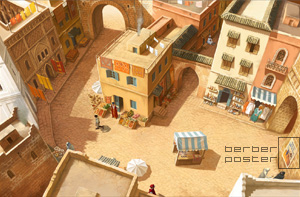 We talk to the greengrocer here and ask what we can get for the 5 Franc. We can chose between

bell pepper and a

half of a watermelon. We buy the half watermelon as we have a plan for it, just read on.
With the crank handle we can scrape the fruity stuff out of the melon and now we have a good

bowl.
If we leave the scene to the left we reach the dyer and his shop. He has everything here but the most interesting thing for us for the moment is his water supply. So we fill the scraped empty

watermelon with water from him. Just put the watermelon into the water and Fenton will ask him and yes, we can have some water.

Here we talk to the gendarme and ask him for a stamp on our form, but he refuses to do so. So we got to lure him out of his stinky shack. So we put the polished quartz on the crank holder and put the hay into the appearing ray of light. And there we go, there is the gendarme running to the fire and saving his new car. And as long as he is standing there and looking around we talk to Professor Hayes and convince him to steal the

stamp from the gendarme. But he can't reach it so we give him the crank handle and this works. We use the stamp to sign the

form and get back to the shop. 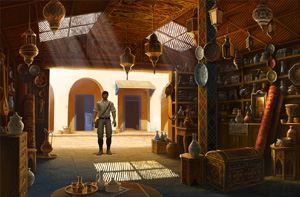 case with Hayes' important medice in it with us. Finally.
So we leave the shop and as we are standing in front of Hayes' shop and don't have anything better to do we give the melon filled with water to the thirsty snake charmer. In return he gives us his

flute with which we can charm snakes and maybe camels. If Fenton refuses to give him the water we have to talk to the snake charmer about everything possible, but the most important topics for him (or us) are his flute, the snake and the music.

Again at the prison we give Professor Hayes his case and he can take his medicine. As we don't want to be suspicious we take back the

case from him and we also get a gold detector. So we use the

gold detector on the case and look at this, it works and the case is made out of gold. So we happily use the crank handle to destroy the

case and now also have the

gold knob from the broken case.

After we got Hayes his medicine we head back outside of the town and use the flute to lure the camel near. As the camel won't let us ride on his back we go per pedes through the saltlake and finally reach the Berber festival. 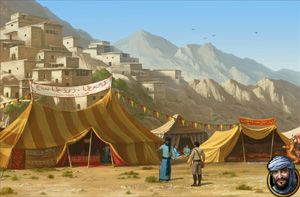 If the berber festival is not shown on the map yet we have to get back into town, to the bazar. Here we have a look at the poster on the wall on the right side of the bazar. This poster advertizes the festival and only after Fenton has seen the poster he dares to enter the desert and finds the festival. If you're still having problems finding the poster just scroll back a bit on this page here. I marked the poster advertising the Berber Ferstival in the screenshot of the bazar earlier on this page.
We are very welcome to the festival and told what awaits us. We are told, that there is a fight where we can win 100 Franc in the big tent. 100 Franc is good, but not enough, but we'll try anyways. But we need a blue djellaba to enter. As we don't have a djellaba we get a

garment ticket for one djellaba. So let's get back into town.

We talk to the cloth merchant about djellabas and give him our garment ticket. As he doesn't have a blue djellaba we chose the

white djellaba and walk to the dyer to have him dye it blue. But this would be too easy, so he's out of blue color. But there is a group of nomads bringing in new blue color right at the oasis outside the city. 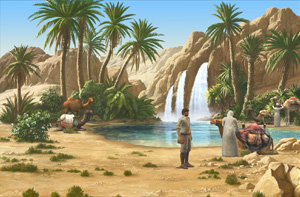 So we go out of the town of Marrakesh and reach for the nomads at the oasis. Once arrived we talk with the leader of the nomads about the Indigo. As soon as we give the nomad the

flat bread he will recognize it and trust as. He trust us so much, that he will give us the

indigo for the dyer and so we can finally return to the dyer's shop.
We give him his long awaited indigo plants long before the nomads reach the town and this time there is no problem in the way for him to dye our

djellaba blue.
And while we are here we give the flue back to the thirsty snake charmer in the alley in front of Professor Hayes's shop before we get back to the Berber festival.

Left of the wrestling tent is the tent of the shaman. We enter this tent at first and talk to the shaman. He tells us some not so precise things about our future, but the interesting thing is the drug he uses. We talk with the shaman about it and he tells us about the thorn apple, and that it grows everywhere here. For example at the oasis. So we go there and get some

100 Franc richer and enter the bazar and want to earn even more money. Why not with gambling (and a little bit of cheating, but read on). So we ask the thimblerigger for a game. The first round is a training round and we chose the middle cup and win. The next round is about money and of course we lose. So what do we do? Right, we ask the thimblerigger to play with out gold ball we got from the broken chest. And now we can always find out where the gold ball is by using the gold detector.

We move to the prison with our newly earned

225 Franc and get Professor Hayes out of jail. 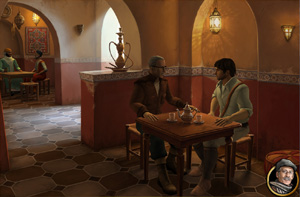 We visit a tea pub with him and have one. In this relaxed atmosphere Professor Hayes tells us everything about Shambala, that this place really exists and keeps the world as one. So the Nazis better not get there. But as things go we need the Piri Reis' map to find the second artifact but the Nazis have the map. So Fenton is about to travel to Berlin and view the map through the Eye of the Dragon and find the hiding place of the second artifact. But as the two want to get the artifact Hayes is shot by the Nazis and so the Nazis also have the Eye of the Dragon. So it is urgent to visit Berlin.
Meanwhile the gouvernour in Hong Kong receives a telegram from Thomas and seems not very amused that he survived and burns the paper.