Chapter 4: Into the Lion's Den: Berlin

Chapter 4: Into the Lion's Den

So we made it and escaped the heat of Marrakesh and landed in the cooler Berlin. Sadly Professor Hayes wasn't as lucky as we were.
So here the Nazis are hiding the stolen Eye of the Dragon. Let's find it and then continue our travel to find the Piri Reis' map and with the help of the map the second artifact. But only one thing at a time. 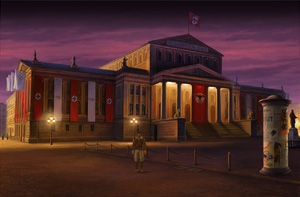 At first we should enter the museum, as we are standing right in front of it in this new chapter in Lost Horizon. We find out everything is closed inside. So we talk to the workman about everything possible in the dialoge menu. We find out, that there is a reception from which we might get into the interesting floors of the museum. And we also get a

infosheet about the olympic decatlon. As soon as we read it Fenton is very happy as he finds out that his old friend from college days Glenn is competing in the decatlon. So we are halfway into the lower floors of the museum already. But of course the game will put some obstacles into our way there, but fear not, this is what this great solution is written for.
So we take a look at the cardboard box we just put on the ground and take the cleaning stuff with us. We get a yellow

rubber glove and a sheet of

sandpaper. And because Fenton loves digging in the dirt we click on the rubbish bin to find some more interesting items. From this rather simple action we get the

dirty lid of the rubbish bin, a broken

bottle neck and a

dried bouquet. We polish the rusty

beard with the broken bottleneck.
After leaving the museum we take a look at the advertising pillar and find a

photograph of a photocamera. We pick up the poster and take it with us. Now we better go to the stadium to find Glenn.

We can't enter without the press pass from the IOC. So we have to think about a way to get a pass, but before that we

fill the rubber glove with Helium. And now we go to the IOC at the Pariser Platz. 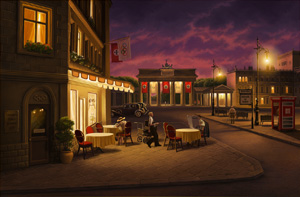 We find out that we went here for nothing as the IOC has closed already. But maybe it was not that useless at all to come here. There are a lot of tourists and other interesting people in front of the Brandenburg Gate. The man in front of the Cafe is a journalist and tells us, that he'd rather be in England and wants to write stupid storys about the royals. Well, his decision...
We pick up the

napkin on the left table, examine it to find out the name of the Cafe (we need that later) is Cafe Erika and wipe the

ketchup on the table with it. Now we have a look at the

dryed bouquet and find the

florist wire. We use this florist wire with the balloon rubber glove and so we can tie the

ballon animal to the pram. This frightens the kid inside so hard that it drops its

Back at the museum we fish for the shiny object in the abyss and get it. It's a

reichsmark.
We enter the museum and take a look at the doors. Now we can use the new hotspot, the doorknob. We smear the

We have a look at Edison's jacket hanging on his chair and see he has a press pass inside it. So we try to convince him to give it to us but he refuses to do so, so we have to find another way to get it. After looking at the napkin we know the name of the Cafe and can make a phonecall from the phonebooth by using the coin. And who are we gonna call? Yes, Cafe Erika at the Pariser Platz. We lure Edison into the Cafe with the use of a small lie and while he is inside the Cafe we can steal his

press pass and his

camera leaves with us. 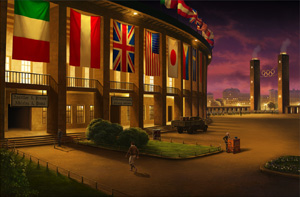 We still need a hat to look like the person on the press pass we just stole. If we look at the hat of the organ grinder we think about it and can talk with the organ grinder about the hat. So we give him the shine lid from the rubbish bin we polished with the sandpaper and get his

hat. Finally we stick together the

Argali beard with the lolly and our disguise is perfect. And so we enter the Olympia Stadium.

Chapter 4: Into the Lion's Den: Berlin