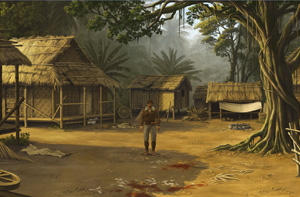 The forsakken village?! So what? And hey, we still have the

Eye of the Dragon with us.
We just pick up a little and small

bundle of reef right next to the entrance to the village, as well as the long

bamboo pole with the

white cloth and some of the

feathers from the ground. The

clay jug also move into our inventory.
Now we have a look into the basket. We'll find 2

stones that will be useful later on. If we look under the one hut in the background we will find out that a

goat is hiding under it. Well, we already saw this but Fenton hast to look close to see things.
Now we start destroying and playing. As the basket is already broken we can cut it in parts with the pot shards and get a

woodsticks.
As soon as we try to leave the village we are stopped by an old man in a hut. He tells us about the fierce tiger in the woods that likes to play golf. Wait, forget about the golf part. He won't leave the village because of the tiger and cannot show us the way to the secret temple. But if he knows about the temple it's not that secret, but anyways we now know, we have to get rid of the tiger.
So we finally enter the jungle and walk to the questionmark, which is a 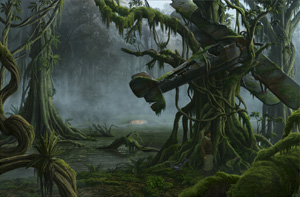 Here we hear the tiger suffer in the background so we better be real silent to not attrackt its attention.
We better get some

herbs here. As we don't have anything else to do here we get back to the

We knock on the olds man's hut and ask him about the stones and the mushrooms. We find out, that the mushrooms are a

clay jug and put the clay jug onto the fire. After a short while the poison is ready and we take the

clay jug with the poison out of the fire with the help of the piece of cloth. So we pick up another bundle of reef from the entrance.
And now we build a blowgun. To do so we tie the

pot shards to one of the wooden sticks and put a

feather on the end of the arrow. After we dunked the arrow into the

mushroom poison we have our arrow ready. We finally put it into the

bamboo and voila, we can stun a tiger. But we still need something to lure the tiger near. So we lure the goat with the herbs and tie the string to it. Then we tie the

leashed goat to the big tree and can go out to catch the wild tiger.
We walk to the swamp, click on the tiger or try to shoot him or whatever and he will come to the village and Fenton waits behind the tree. So go for it, shoot at the tiger.

Fenton and the old men get rid of the tiger and we get what we wanted, the old man shows us the temple. 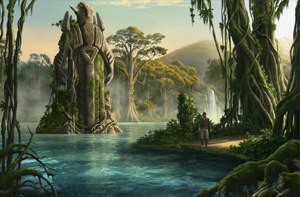 So here is the temple we searched for so long and found out about on the Piri Reis' map on the Wewelsburg. But it seems like most of the temple is under water and only the staue on top is visible. And we are of course more interested in the stuff inside the temple, maybe even an artifact. Some more riddles are unavoidable...
We let Fenton dive into the lagoon to check out what we have down there at the entrance of the sunken temple. So we see a hungry angry shark down here, and we better get rid of him before we start diving deeper. And before we leave again we let Fenton scoop some

water out of the lagoon into the clay jug. Then we go back to the

Back in the swamp we climb up to the plane in the tree. Up here we have a look at the cockpit and there we find a

cardboard box. Once we look

inside we find an

old radio. We take a closer look at the radio and there it happens again, Fenton breaks something. But we can use the small

radio to unscrew the cover on the cowling of the plane. From there we get a

long cable that we connect to the

cloth. As sharks don't like electricity but do like blood we tie the bloodsoaked piece of cloth to the

radioconstruction and go back to the

We throw some parts of the radio into the lagoon. With the crank we can send gigantic 40V into the water, but that's enough to get rid of the shark and we can finally go diving. 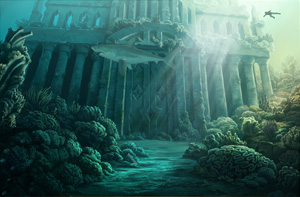 Here we have to be fast as Fenton has only a limited amount of oxygen. We pick up the

metal rod. We also fill the

clay jug with some mud from the ground. Now we have a look at the door and find a recess. This interesting recess needs to be observed too, so we do so. After this is done we can swim back to the surface.

reeds we collected in the village.

form in the form of the carving. We fill this with the

We burn the mud in the form with the fire that's still burning. As Fenton is a bit of a sissy and doesn't want to grab into the fire we use the metal rod to get the

burnt form out of the fire.

Down here we put the form into the recess and voila, we're inside the secret temple. 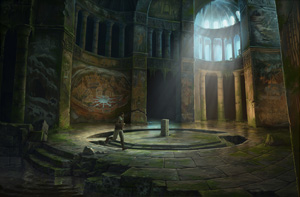 Inside the temple we collect the 6

stones from the ground and from the murals. While we are here we can look at the murals and find out more intersting stuff about the history of Shambala (or not) and then go to the stone in the center of the room and look at it. We put all the six stones into the holes here.

Now we pick up the

artifact and made it through the chapter called The Eye of the Tiger.


But Fenton is not happy, rather depressed because of all the responsibility that he now has. And he already is responsible for a few dead people, so he decides to travel to Hong Kong and not to the monestary in Khembalung.
He talks to Lord Weston about his plans to destroy the artifact so that he won't lead the Nazis to Shambala (as they already have a leader), but Lord Weston doesn't agree with him, as Richard is his son and also the Nazis have him under control and take Fenton with them to Khembalung.
Fenton is the only person that can use the artifact and now the Nazis force him to use it. On the other side everyone appears in the center of Shambala, except Fenton. After a long talk with Richard from the past he can finally enter the next chapter and kick some Nazi butts.