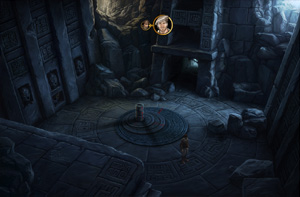 So what do we have to do here? We have to find the 3 pieces of an amulet to be able to use the force within Shambala to finally get the Nazis out of Shambala. So come on, we can do this. And we also have Richard helping us from the past of Shambala. So continue reading...

We can't do all that much here with Fenton so we switch to Richard into the past of Shambala and do a lot of stuff in the time there.

As Richard we open the stone slab and take the

wooden cog with us. If we switch back to Fenton we can see the gear is gone in his version of Shambala. This is quite logic, as he is there in the future of the past and we just removed it in the past. And if it is not there in the past it can't be there in the present. And now most of the puzzles in Shambala work this way.
So we are still with Richard, pick up the

nut and can leave this room for now. 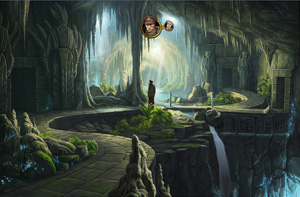 Here we pull out the right

metalpost and also get the

chain that is hanging at it. And while we are at it we turn around and kick the stones behind Richard into the abyss. And vandalism is a nice hobby so we also destroy the stalgmite in front of the door to the right with the metal post. In the middle of this cave there is some loose soil we can plough through with the metal post. Now we use our hands to shift it around. We will uncover a coffin in the dirt that we cannot do anything with, but at least we have some

wet dirt in our inventory now.

Through the door on the right we enter the

This is the center of Shambala. Here we pick up the

square stone that is just lying around here. That's all we can do here for now, but it sure looks interesting here already, doesn't it? So we go back into the northern cave and leave either through the northern or through the southern exit. On the map we chose the

This is the temple of fire in Shambala. Looks quite hot in here. But Richard has no time to change clothes, so we tie the

torch to the chain and let this down to the lava to light up the torch.
The statue demands a sacrifice. The sacrifice of life is what we can give right now, so we put the moist soil into the right hand of the statue and on top of that pile we put the nut.
Now we already leave the temple of fire and enter the 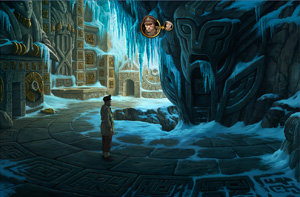 icicle right in the middle of the room and put it into the tub a little bit to the left of it. And Richard does all this without wearing gloves! With the lit torch we melt the icicle and put the wooden gear and the chain into the tub afterwards. We just do this whithout thinking about why we do this, well, why not, not everything needs to make sense. And Richard feels the same and you should too, if you play with this Walkthrough. But in the future it will make some sense.

If we look at the coffin in the middle of the room we see that there is a lock on it and the lock has lost some paint. The torch is the tool of choice to burn away the paint from the lock on the coffin. Now we go back into the room where we started this chapter in Lost Horizon.

We stuff the square stone onto the stone pedestal. So that's it for the past, now we better get back to the future.

Look at this, the square stone we just put on the stone pedestal in the past got a

hole in it. So we better pick it up.

bone out and with us. And next to the waterfall are some

pebbles we also take with us. We exit through the door to the right into the 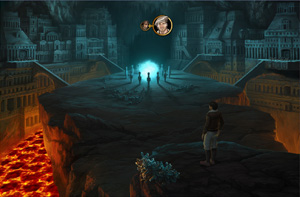 We see Kim and Countess von Hagenhild standing in the center and we can't reach them.
The Countess wants to blow up the 12 pillars around the forcefield to turn it off. Totally crazy she is. Like Yoda talking I am. This can only take a bad end, so we better stop her evil plans.
We play as Kim for a short while and can only do some stuff with the table and then we are Fenton again already.

As Fenton we pick up some

crystals from here and can leave again as there is nothing else to do here at the moment.

We can pull out the

frozen gearwheel from the tub in this time of Shambala. And now we stick the 3

crystals into the 3 recesses in the walls. The

crystals will send a ray of light across the cave and finally melt some ice. Behind the ice we can see (and pick up) the

tailpart of the dragon amulet. 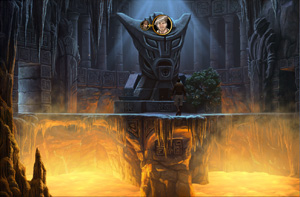 Back in the temple of fire we melt the ice by throwing it into the lava. Of course the

chain helps us to keep the

gear wheel in our hands. The nut we planted with Richard in the past of Shambala already grew to a huge tree. That's the symbol for life. Now we need a symbol for death and there the bone fits very well. We put the bone into the left hand of the statue. There is only the motor or the fuel for the whole statue thing missing so that we can continue playing. We tie the

chain to the square stone and scoop some

lava with it before we finally put it into the middle of the statue. The statue reacts to our newest sacrifice and releases the

body piece of the Dragon Amulett which we take with us of course. 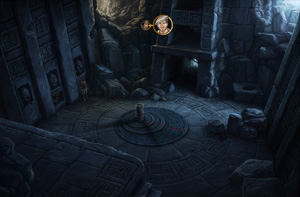 Again we move to where we start the last chapter of Lost Horizon. Here we put the gear wheel to the other gears in the wall and see it works now. If we throw a pebble into the left head we see the stone disc in the middle of the room turning.
So we throw pebbles into the left stonehead until the red line on the big stonedisc aligns with the red line on the pillar. We do the same with the middle stone head and with the right stonehead. In this order. Left, middle and finally right stonehead. Once the red line aligns completely all over the discs on the ground the pillar opens and shows us the

head part of the dragon amulett.

We put together the

dragon amulett and use it with the force field. Nothing is happening. But there Richard appears and tells us that Fenton has to think about something when using the dragon amulett. So Fenton thinks about a dragon and causes some confusion here.

glas shard from the broken bottle on the ground.

Fenton kicks ass by using the dragon or the amulett or the dragon amulett on the Nazis. They jump into the lava in panic.

Kim gets the glass shard into her hands and cuts the ropes around her hands.

Fenton cleans the last plattforms from the evil Nazis. 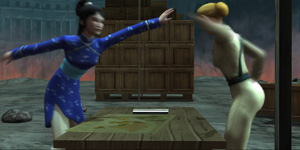 Kim fights with the Countess for a final fight. No matter what kind of fighting style we use we will always win against her...

Fenton comes to the force field but he is too late to help Kim. But she can help herself quite good.
And Richard also shows up just to disappear shortly afterwards and stay with the priests in the past of Shambala.
In the present Fenton can finally win Kim's heart and sadly this is the