2 british soldiers, Richard und Thomas, flee together with a monk from firepower of the nazis, that are close behind them. The monk shows Richard the secret passage und the escape in there. Thomas gets hit by a bullet shortly before he reaches the door. He then is captured by the Nazis. The door closes and the Nazis are kept out. 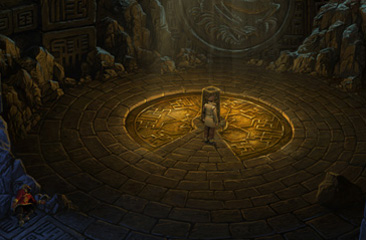 The monk is also hit by a bullet and tells Richard about the biggest secret of mankind, and that he must defend it from the nazis. Then he dies but he gives an old

artifact to Richard before he dies.

After Richard took a look around in his cave he finds out that there is nothing else to do than laying the artifact onto the stele right in the middle of the room. Let's see what happens now.

Richard gets beamed away and noone knows what happened. But we'll come back to this later.

The Nazis are angry because Richard and the Monk disappeared without leaving the slightest trace. So the Nazis are searching for the secret chamber. At the don't want unwanted guests, so they give out the order to have all maps destroyed that show a way to the temple with the secret chamber. The mapmaker whose maps lead to the temple lives in Hong Kong and that's where we get into the story now. 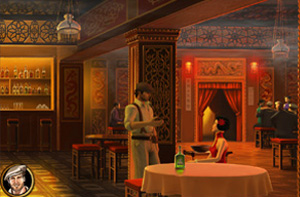 Fenton Paddock, our hero that reminds everyone a bit of Indiana Jones is hanging around at his favourite pub owned by Shen and gets to know that members of the triad of Mun Tong are searching for him. But he doesn't care and he makes a bat with the bartender. It's his job now to get the phonenumber of the new singer in the bar.

So, here we go. Just talk to her and say nice things to here. You can do this by always chosing the first talkingoption.
You succeed and she gives you her number on a

napkin, but sadly the nice conversation comes to an abrupt end as all these triad members appear and want to catch Fenton. But because we were nice to her the Lady helps us escape through the backdoor. But Fenton won't come all that far there.
In case you didn't get the singer's phonenumber you can use the

Absinthe in the wok and then light it with the

lighter and finally kick it into the restaurant to cause confusion and distract the triad people and finally flee. But again, Fenton won't come all that far.
The triads catch him there and beat him up. Then they lock him in a wooden box to drown him in the harbor.

Inside the box at the harbor 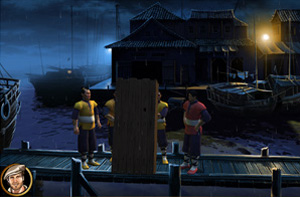 It's nice, that the triads like to torture their victims instead of just shooting them. So we still have a chance of escaping.
Inside the box, that can be your coffin very fast you have to be creative. And sadly Fenton can't hold his breath for 10 Minutes like other adventure heros.
Move the

lighter to the piece of tar that is on the right side of the box. The tar melts away and you can use the napkin or the

cork to pick it up. Well, you soak it up. Because of the tar the

napkin is quite waterproof, and you can stuff it into the hole, the same goes for the cork, and now you can use both of your hands to do something useful. So Fenton can open his nearly empty wallet and finds some

hinge and then use the hinge as a crank to open up the wooden box before Fenton runs out of breath.
After a short cutscene in which a mysterious man talks to triad boss Mun Tong and gives him an order we enter the next chapter. The ymsterious man is a naziagent and wants the triad to find Yen Wuang, the mapmaker, who made the map to the temple in the Kembalung Valley, in which Richard disappered and wants all his maps destroyed.