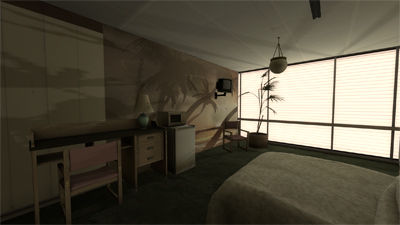 ... ... in a room that looks like an old motelroom straight out of a film noir. A voice speaks to you, but you can't see the speaker. The speaker greets you and then also wants you to actually physically move. Luckily it's just Wheatley, a small sphere that talks with an english accent all the time and gives you hints and wants you to learn the controls this way. The workout you have to do now is not all that bad, as you just have to move the mouse/controller as you are not playing a sports sim on the wii but Portal 2.

So come on, do what he wants you to do to please him, look at the floor, look at the ceiling and then look at the picture on the wall until Wheatley sends you to sleep while calm music is playing. 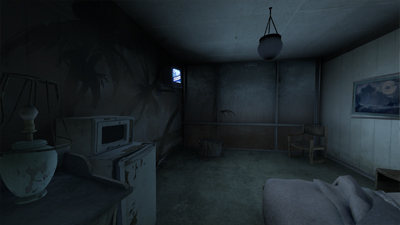 After you wake up again after sleeping for obviously a very long time the room looks even more run-down. But at least we are still alive and awake and someone is at the door. So you better go and have a look who's there.
Ah, it's Wheatley again and he comes inside and thinks he can get us out of here. Everything starts to shake and Wheatley tells us something about brain damage and drives us and our chamber against a wall for such a long time we have to get a damaged brain for free.
But after some time we finally arrive where ever we should arrive and can jump through the damaged wall. So the wall took the damage, not our brain, and we need our brain later on for this game. through the hole in the wall and find yourself landing in a scifi toilet chamber. 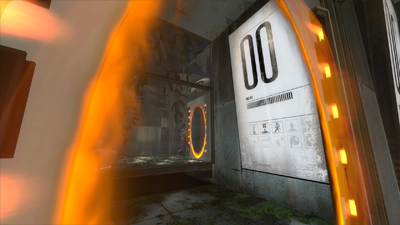 Out of the toilet and right into the first chamber in Portal 2 that is labeled chamber 00.
Everything is easy in here and the game introduces you to the controls and to what lies ahead. Walk around the toilet and the first door just opens without you doing anything special.
In the next room a Weighted Companion Cube drops out of a cube dispenser from the ceiling. Use the E button to use things like the cube. By pressing E again you get rid of things you just picked up. So pick up the Cube and put it on the huge red switch on the ground. The door to the next room opens up and you solved the first riddle, but don't worry it's getting better in no time and you will make good use of this Portal 2 guide.
Step into the elevator and drive down to the next riddle filled chamber. You never know if it's faster to leave Aperture Labs to the top or to the bottom. 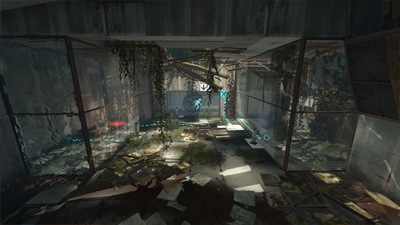 Walk to the chamber and take a look around. Then jump inside.
Right behind you is an orange portal, but you can't do anything with it without the counterpart, the blue portal. So if you press one of the buttons right in front of you, you can create blue portals and you have a working connection between the two portals. Press the button to the right at first to open the way into the separated chamber with the weighted companion cube. Step into the orange portal, get the cube from the chamber and get back into the main room. Now press the button to the left to get into the chamber with the big red switch on the floor. Put the cube onto this big red switch to open the exit door. Step back into the main room and open the portal to the exit chamber by pressing the button in the middle. Walk through the orange portal and then through the exit to get to the elevator further down. 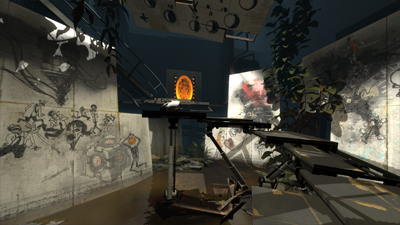 The first thing you will find in this chamber is a small empty pillar where the long awaited portal gun should be found, but nothing is there. Perhaps you can find it if you get closer to the pillar...
Whohah, what is this, the floor crumbles and collapses under your feet. At the end of the hallways you'll find a chamber where the long sought after portal gun is sitting. So shoot a blue portal onto one of these colorful painted walls and step through the newly created portal. See, we now are on the railing that was unreachable before.
Shoot a portal to the wall on the upper right or just follow the metallic hanging bridge. 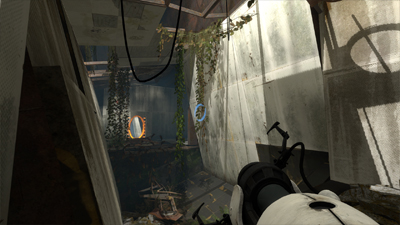 This hallway is a bit longer but sooner than later you reach another chamber. Before you fall into the hole and you are trapped just shoot a portal to the wall right in front of you. Step through it and you are past the hole.
You can see the exit from this chamber from here and when you place a portal right next to it and step through the orange portal again you'll be there in no time. Through the exit you get to the elevator to the next chamber. 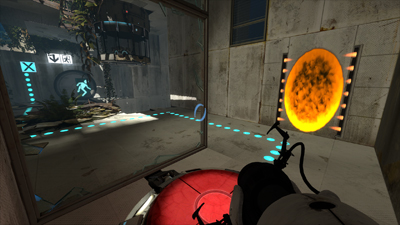 The whole procedure in here is very easy, but it will get better later on. Walk towards the weighted companion cube and just be happy that one of the cubes comes out of the cube dispenser. Sadly it drops down deep and is rather unreachable. But if you stick a portal under the cube it flies out of the orange portal and is on your level. It's this easy. Pick up the cube and lay it down onto the huge red switch and you won this part of the chamber.
If you should fall down into the hole, no problem, just use a portal to get out of the hole in no time. Right after the chamber 03 the chamber 04 is fitting in there seamlessly. And here it's getting a bit more complex. Only a bit though.
Walk to the hole between the two pedestals and place a blue portal under the companion cube. The cube lands on the one pedestal with the orange portal next to it. Now you can jump into the portal at the bottom of the hole or be relaxed and create a new portal somewhere and walk straight through the new blue portal and get the companion cube and drop it on one of the huge red switches.
You get the second weighted companion cube by walking through the blue portal again and keep standing on the one pedestal with the orange portal. From here you shoot a blue portal next to the other companion cube on the other pedestal. After walking through the orange portal you are right next to the cube, pick it up and place it on the 2nd red switch.
The exit opens up, so walk out.
But now you are stuck. Above your head is an orange portal so you shoot a blue portal on one of the walls, then go through it to fall on your head. After destroying the ceiling you can proceed without further problems. You can have a look at a bureau with a scribbled wall but there is nothing really interesting. So head into the elevator. 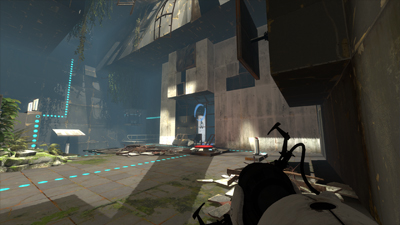 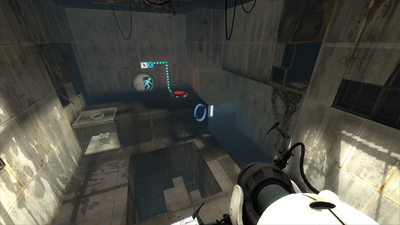 There is no chance to proceed in this chamber without going through a portal first. So shoot a blue portal somewhere and walk through it and see that you landed in front of a hole. Shoot a blue portal to the ground of the hole and jump right through it from the top. What we learn from this is that the momentum from the fall is conserved and applied to the horizontal direction the orange portal pushes you. The speed is enough to take you to the other side of the room. Simple physics with portals.
Up here you walk to the small hole in the ground and free the cube inside the cube by placing a blue portal under it, pick it up and jump through a new portal on the bottom of the hole together with your weighted companion cube. Now place the companion cube on the red switch next to the exit. Walk through the open exit and follow the hallway behind it. 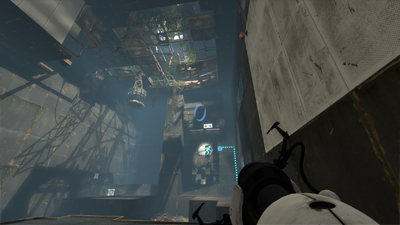 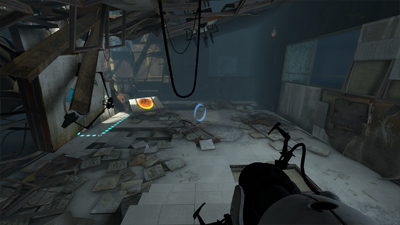 And in this chamber Wheatley is already waiting for you and greets you again and you should just listen to him. Shoot a blue portal right behind him and climb through the orange portal into the next room. Now Wheatley wants you to catch him. Stand below him and catch him with "E". Get him and stick him into the docking station. After you looked away for a moment he opens a secret door to the backstages of Aperture Science. Pick him up again and follow the way. Through the hallways you reach a huge transition bridge. Cross this bridge and you are in an open area. Find a way through here and get back under ground again until you reach another docking station. Wheatley babbles something just for himself before he wants you to plug him in again.
Content


As clumsy as he is he reboots GLaDOS (this is an abbreviation and means Genetic Lifeform and Disk Operating System), your archenemy and nemesis from the first Portal game. There she is again. She throws you into the coolest trash funnel I have ever seen (I mean this is way cooler than in Star Wars 4) and you should just enjoy your ride. Down there you have to go over something like a bridge to the right, under some metallic structures and then back to the left until you find a real Portal Gun that features two portals, one on each mouse button. If your mouse has 3 buttons then you have bad luck, there are only 2 portals per Portal Gun. The rest of the level is about getting over obstacles with your new Portal Gun until you reach another elevator.
This is the end of this chapter for now, to find out how the story with you and GLaDOS continues keep on playing or just turn the page here.