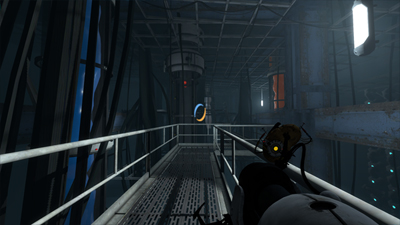 After you climbed up with some portals you have to follow the hallway through the backside of Aperture or Wheatley Science and pass past the gel pipelines until you are at the end of this hallway. Here you stuff the talking potato also known as GLaDOS into the pod and here we go up, directly into Wheatley's command central that obviously is protected very weakly. Here you are faced with the last fight in Portal2, if you read on you will find the solution how to fight Wheatly, but it's better if you try on your own at first and only read on once you are done or you cannot make it. 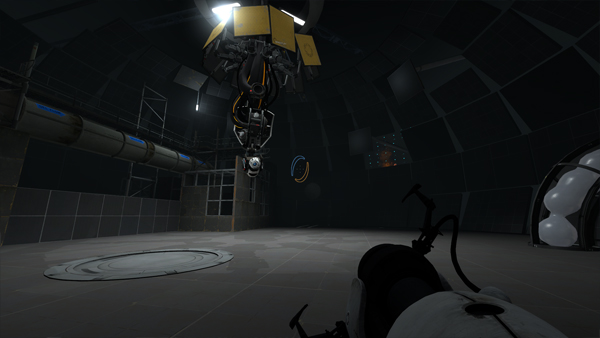 So whatcha gonna do when Wheatley comes at you? And he even throws bombs at you. Flee under the pipeline with the grey gel here and Wheatley will shoot at it and destroy it. And now we can even use portals in here. So put one portal in front of you and another portal high up to the panels up there around Wheatley. His bombs mostly go down a little bit in front of you, so just stand behind a portal on the ground with a good distance to him.
As soon as you hit Wheatley the first time GLaDOS comes in and offers you a corrupted core. Use portals to get up to the metal walkway and grab the core hanging around up there. As soon as you have the core the metal walkway collapses under you, but therefor the blue gel is spilled everywhere. Use the blue gel to get close to Wheatley's node and put the first core there. Now you do the same thing as you did before, but this time you shoot at Wheatley from below as he covers his top now. This should be no problem if you managed to hit him before already.
And now we have our second core on the field. Again get up to the metal walkway and jump over the gap by using the blue gel between the two ledges. Once you are on the other side it's quite easy to catch the bouncing core. With the core in your hands you jump at Wheatley again, this time from the other side and you put this core onto his metallic body too.
Now Wheatley covers his machine body both from top and bottom but it is possible to hit him from the top. The last core is hard to reach but not hard enough for us. Luckily the pipeline with the orange gel breaks and the trail of the orange gel leads to a wall with grey gel on it. So put a portal on this wall and the other portal right under the core and use the speed you get from the orange gel to jump through the portal and up to the core and grab it. Again you put the core onto Wheatley, use the blue gel to reach the last node for the core.
The last thing you should do it push the button in the side room, so portal there. But Wheatley prepared a trap in here too and almost kills you. But only almost... so use your last powers to shoot a portal to the MOON! and send Wheatley out into space. Finally you made it, now enjoy the