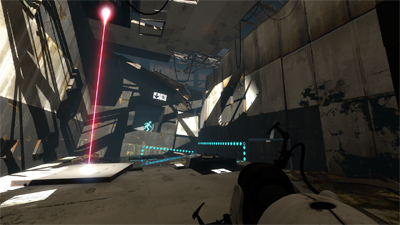 So there we have it, GLaDOS is back on our back and wants to test us. Well, well, we don't find anything worthwhile in the first chamber at all, but after a short time of waiting everything builds itself up and the laser appears. So you better place a blue portal there where the laser is coming into the ground and can't go on. Now you walk along the left side of the water puddle and at the end you jump to the right onto the platform there in the water. Now you only have to open up an orange portal above the laserpod, and hey, what a lucky thing this place is lit with a dim red light. After opening this portal the platform rises from the puddlelevel to the exitlevel and you can walk through the exit on to the next chamber. 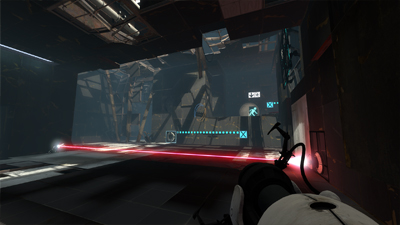 This chamber also is not that hard, but we get introduced to the mirror cubes. Use the space bar to jump over the laser and have a good look into the chamber that is a bit hidden in the edge there. Eventually Wheatley pops in but hey, who cares, there is a shine new toy in there, the mirror cube. Place a blue portal right under the mirror cube in there and an orange portal somewhere on a wall nearby. The mirror cube comes tumbling in. Pick it up and use it to reflect the laser beam into the laser pod on the wall. You are now probably behind the laser beam, so jump over the beam and walk up the stairs, that just appeared.
To open the door for a longer time you just shoot another portal onto the ground somewhere up there and a second portal again right under the mirror cube. Once the mirror cube is near you pick it up and place it on the red switch in the ground and you can finally leave this chamber and proceed to the next test chamber. 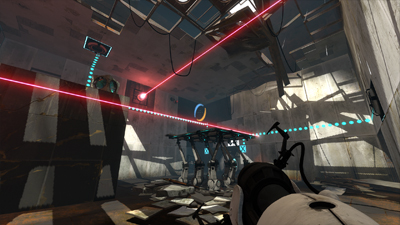 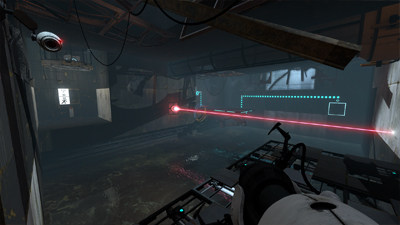 So, finally it's getting interesting, don't you think? At first you have to reach the action button you can see right on the opposite wall from the entrance. Shoot a blue portal on the middle(!) wall part just left of the entrance and an orange portal somewhere next to the button. So walk through the portal and activate the button. Watch out for the companion cube and make sure it won't fall into the water. Now you shoot an orange portal from here to the wall where the laser hits. Thanks to the still working blue portal the laser beam now hits the laser pod and you now have to wait a short moment until your shuttle arrives. While you are waiting you could and should pick up the weighted companion cube and then your shuttle will arrive.
As soon as you are on the moving platform hold the cube into the middle of the platform. Once the laser hits the cube the platform will stop moving and now it's time to move around the cube to the other side of the platform while still blocking the laser. When you arrived on the other side of the laser beam pull the cube out of the laser beam and continue your ride. Of course you can also jump over the laser. So jump off the platform in time and lay the companion cube onto the red switch to open the exit. Here we go to the next level. 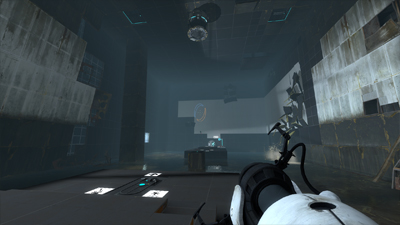 This chamber is one of the easiest in the whole game, but if you are bad with your timing it is hard, but actually it should be no problem, but I'll write this anyways, in case someone really needs help here ;). Start by using the catapult to get catapulted over to the other side of the room. Here you press the action button and afterwards a weighted companion cube will drop out of the cube dispenser in the middle of the room and gets shot up again and again by a straight catapult. Now you have to catapult yourself to the other side at the right moment to catch the cube in flight. I always start jumping while the cube is somewhere down, don't worry, you have a huge grabbing radius. And remember, you grab with "E". Now put the cube on the huge red switch on the ground and open the way to the elevator. 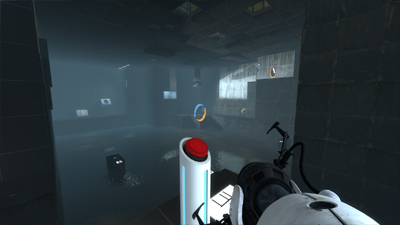 Here you will find quite some catapults. So walk on the first one and get catapulted in U form. If you are fast enough you'll make it and place one portal on each of the diagonal platforms. If not you have to go back one more time. So place a portal on the lower diagonal platform and one portal somewhere high around the corner so you can make it back to the start without falling into the water. Now you step on the catapult again and this time you place the second portal on the diagonal platform you are headed against so that your momentum is good enough to throw you further on to the next catapult and from there to the push button. Now only the companion cube is missing.
So press the red button and let GLaDOS throw trash at you (meh). It works on the second try though, finally a companion cube is coming out of the cube dispenser. But before you release it you paint a portal on the wall above the 2nd catapult. Use the color that is used on the lower one of the two diagonal platforms. Shoot it on the wall with the 2x6 tiles, right in the middle of the lower line (see the picture here). Now it's time to release the weighted companion cube from its cage. Watch it flying the same way you flew and then come out of the new portal on the wall over there and land directly on the huge red switch a bit away from here. And there the exit opens. 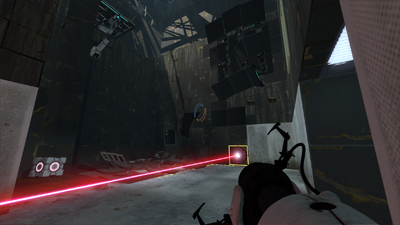 After some failed tries to pick up the weighted companion cube it finally works. GLaDOS is really neutral against the cubes so we can destroy them. Use the cube and place it right in the laser beam. The cube is still intact and even better the elevator platform comes down again. Stand on the platform and place a portal on the wall somewhere and one portal right under the companion cube. Now the cube is out of the way and the laser beam hits the laser pod again and the elevator platform moves up with you on top.
Up here you shoot a portal on the platform that is furthest away from you and then you put another portal under the companion cube again so that the cube is teleportaled up here. Take the cube with you and jump into the portal down on the ground. You have enough momentum to make it over to the huge red switch on the ground. Place the weighted companion cube on the red switch on the ground and a landing bay platform appears next to you that shortens the way over there.
So put a portal on the other platform on the other side of the room and jump through the portal at the bottom of the rooms again and you will make it to the exit with the landing bay platform. You are free to leave this room now.

Here is a small Easter Egg to be found:
After GlaDos is hinting at NOT taking something with you, we want to DO so and steal a companion cube.
As soon as you reached the landing bay platform you will see the concrete walls next to you and can put a portal on one of them. Do so, grab the cube and then again jump into the portal on the ground and reach the elevator with the Cube.
This also gives you the trophy "Preservation of Mass". 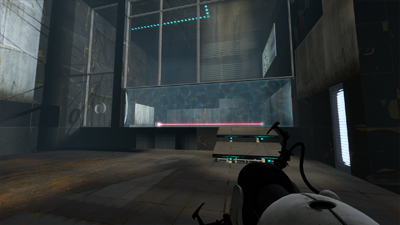 Once you know what you have to do here it's really easy. But isn't it always like this? The most important thing is what GLaDOS tells you really fast. Which is something like: All portals and cubes disappear once you move across the blue energy field at the end of a chamber. The stupid thing is, there is a blue energy field right in the middle of the room now. Well, actually GLaDOS is quoting a line from Moby Dick, which you can hear pretty good in this YouTube Video.
So walk through the blue force field into the seperated room with the laser beam inside and push the button. A mirror cube comes raining down. But you can't carry it through the force field.
Content

That's it for part 2, part 3 is right there when you turn the page or just keep on playing...