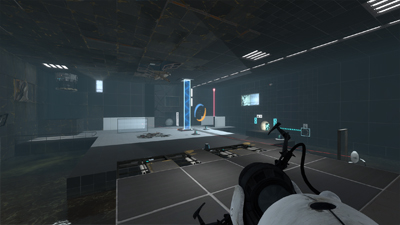 After the great and surprising confettistorm we finally reach a chamber that is bigger than the chambers before. So come on, there is a lot to do here.
Luckily you are behind the light bridge and so you are safe from the turret. So look around and you will see another place to be at the other end of the chamber with 4 movable platforms in front. Shoot a portal to the wall there and shoot another portal to the ground right behind the light bridge to still be safe from the turret. Now jump into the portal and you are even safer from the turret as you are on the other side of the room and behind the turret now. Well, up here you will see two cube dispensers to your left. Shoot a portal right in front of the cube dispenser that is further away. Shoot the other portal to the ceiling, right there where the light bridge ends. Now there should be a light bridge right in front of the cube dispenser. So now is the time to press the button up here and watch what happens, both mirror cubes will land over there, near to the far away cube dispenser. And you need both of them, so if one of them will fall into the water locate the portal in front of the cube dispenser closer to the cube dispenser to stop the cubes in flight.
From up here you can also move the cubes by placing a portal somewhere on a wall and the other portal right under the cubes. So move one cube right into the booth with the laser beam coming in and the other cube as good as possible behind the bulletproof glass wall in the middle of the chamber. Now use the wall behind you to place a portal there and move yourself into the laser beam booth.
In the laser beam boot you use the mirror cube to reflect the laser beam along and a little bit behind the bulletproof glass wall. Now place a portal behind the glass wall and move there, grab the cube there and reflect the laser beam onto the turret on the other end of the room. Now the turret is gone for good and you have all the time you need. Walk back to the laser beam booth now and reflect the laser beam so that it hits two of the four blue bumpers on the ground. And with the second mirror cube you walk to the end of the laser beam and reflect the beam straight through the last two bumpers on the ground and right into the laser pod to open the exit.
GLaDOS now calls your parents or at least tries to, but noone answers. But this doesn't matter anyway, so place a portal on the ceiling where the light bridge ends and another portal on the outsides of the laser booth to finally reach the exit and take the elevator to the next chamber. Wheatley appears and tells you some stuff, so maybe he is right. Hang in there! 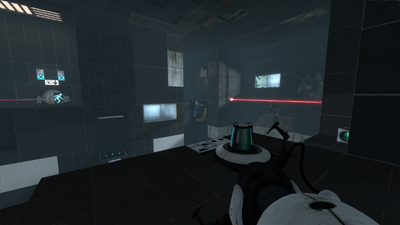 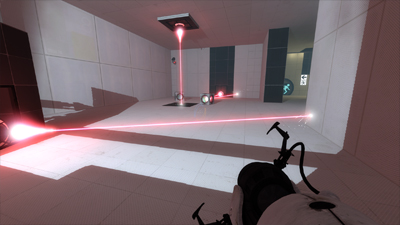 If you know what you have to do this chamber is quite easy, so I just tell you what to do here, okay. Then it will be easy. Place a portal to the wall, right where the one laser beam coming from the wall that is displaced by the mechanical arms hits the wall and another portal to the pillar opposite the three laser pods. So the first laser beam already hits the left laser pod. Now you just use the two remaining mirror cubes to aim the last two laser beams through the portals into the laser pods and you are done here. The laser beam coming from the ceiling has to hit the right laser pod so the other laser beam parallel to the ground goes into the middle laser pod and the exit is already open.

A clever Portal 2 player called lost4468 uploaded a video to YouTube in which he solves this chamber without using a single portal. Pretty cool, here is the video: 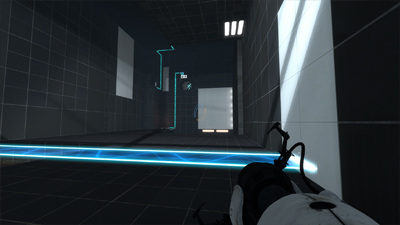 It all starts so innocent. Place a portal at the end of the light bridge and one up there next to the button. Walk through the portal and use the button up here. The weighted companion cube is coming out of the cube dispenser and as soon as you are going to get it the lights go out and even the light bridge is gone.
Wheatley! He did it and now helps you escape the test chambers shortly before room 22/22. So follow him on the linear way through the hallways in the back of Aperture Science. Even though the music is quite hectic you have no need to hurry and can have a look at how it looks backstage of Aperture Science.
GLaDOS will try to lure you into another really easy test chamber with nice green stuff at the exit but just ignore her, as this chamber is a trap. But you will earn an achievement if you do get in though.
Content


Follow the light bridge to the other way until you reach a chamber with three turrets inside. Destroy them and after the last turret there is a concrete wall you can shoot a portal at. Now turn around and see through the walls surrounding you to find another concrete wall out there to shoot a portal at and get out of here. Now follow Wheatley again until you are at another turret. The old shoot a portal to the wall and another portal under the turret trick works here too so do this. Afterwards you just walk up some stairs into a huge open room with lots of test chambers surrounding it and in here you better keep running the only possible way or you will be crushed. Once you reach the elevator you are safe and this chapter is over and you are fleeing from GLaDOS. But if your escape is successful depends on you, so turn the page...