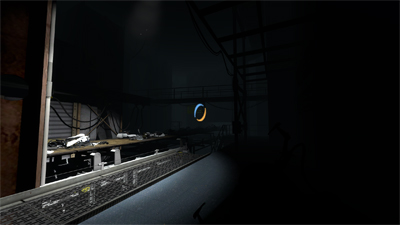 Uhoh, the door won't open. So just shoot a portal through the door and another one in here and once you're through you're out and in a hallway. Follow this hallway and you are back in the guts of Aperture Science and Wheatley also appears again. After the light went out Wheatley turns it on again and you can now enjoy the nice shadow effects or just follow the hallway until you reach a conveyor belt where the turrets are made (see the picture). Jump on the belt and follow it to the end to the right and there are more stairs to another hallway. Here you have to jump over a broken part but this is no problem, after this you reach another conveyor belt, this time it's running. Don't get distracted by the plates and welding robots and jump off to the left before it's getting too hot.
Walk through the dark room with the Weighted Companion Cube tubes until you need a portal once again to reach the hole up there. After some more portals you can watch how the turrets are made and packaged. Pretty fast. Sadly you cannot sabotage this... yet. Walk down the cube snail and jump off into the hallway shortly before the cube snail ends. In case you missed that jump or you fell down, there is a concrete wall that can hold a portal down here and the hallway directly above the concrete wall can also hold a portal.


There is a place you can get stuck, some might say it is a bug, so watch out for this (or try it and have some wierd claustrophobic fun...)
Right when Wheatley tells you about the previous caretake and you enter the area with the abandoned coveyor belt with the broken turrets. On the left side there is a brown and rusty support beam with two grey railings (PIC). If you try to come into contact with the railings, you will notice that you can completely pass right through them (PIC). But if you pass right through them, you will fall into a gap that you will be unable to jump or portal your way out of (PIC). 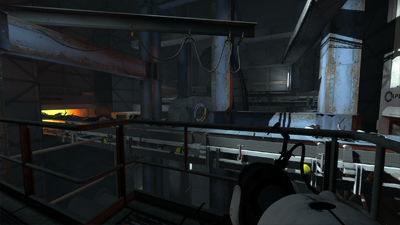 Now you are in the factory area of Aperture Science. Here the turrets are made and other stuff. Shoot a portal to a wall in the bureau and another portal above the conveyor belt. Jump through the portal and follow the belt and jump off to the right at the end. Via the venting shafts you reach another conveyor belt which you follow.


Here is a nice easter egg waiting for you. After some time a clever turret will come along and tell you interesting thing about your future if you take it with you. It's the one with the active laser that is saying 'I'm different'.

Then jump off from the conveyor belt to the left this time at the end. Follow this hallway until you reach the puppet that is shot by the turrets.
Here you place a portal on the ceiling above the puppet but still behind the wall the puppet is standing in front of. Another portal on a wall of the hallway you are standing in right now and you can jump behind the wall. Now carefully look out from behind the wall and shoot a portal to the wall in the bureo behind the turrets. The only other wall that can hold a portal is the wall behind the puppet. So be fast, shoot the portal there and walk through the portal and then run around the corner to the right because the turrets will fire at and after you. Follow the hallway to reach the quality assurance for the turrets.
Here some turrets are thrown all through the air. So stand next to the trash bin they land in, right next to the hallway and grab one of the turrets coming in here (with the E button). Now walk along the walkway in S-form and enter the control room. Here Wheatley "hacks" the door open and with two good placed portals we can get near to the prototype. Throw the prototype away and place yourself in the scan to get an achievement. Then replace the prototype with the broken turret you brough with you from the other side. Now Wheatley tries to open the door again and this time it really works.
Through another bureau room and past some kid's science projects about energy generation with vegetables, for example a potato battery you reach more hallways. Just follow Wheatley here. 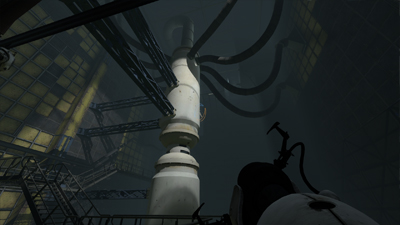 This huge thing is the Neurotoxin Generator. Of course we shut this thing down. To do so follow the walkway and use the elevator to get up a level. Up here you switch off the switch right next to the elevator and all the wall parts will fall down. Now put a portal to the wall where the laser hits the wall and then get back to the massive room with the massive neurotoxin generator. Here concrete wall are driving up and along the ceiling. So put the other portal on one of these walls once they come out and let the laser cut all the hoses pumping the neurotoxin all around. Once all the hoses are cut get back to Wheatley and you will be sucked into one of these pipes. Here you and Wheatley are separated but at least you are very close to GLaDOS now.
If you keep close to my Walkthrough there is no neurotoxin bug that is not working. Everything works just fine, just like explained. 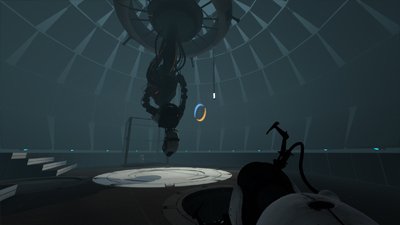 Walk up the stairs and look out of the window. Well, the broken wall. Somewhere in the distance there is a ceiling made from concrete. So shoot a portal there and the other portal somewhere inside here and jump through it. Try to open the door here. Doesn't work. But it continues, we approach GLaDOS now.
Content


She tries to kill you but what we did before in this chapter prevents this. So Wheatley comes in. And we put him on the docking station. Now you only have to push the button and it goes on. Portal to the button behind the catapults and also use the portals to come in from behind and you will reach the button and Wheatley will take control of the whole Aperture Science Machine. He wants to bring you out with the help of the elevator but his new powers have corrupted him and he puts GLaDOS on a potato battery and hammers you both relly deep down into the Aperture Vaults.