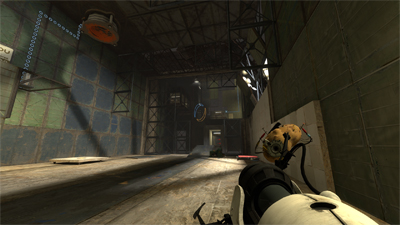 So, now we are in another test sphere (1972 01) and this time we have GLaDOS on a potato with us. And in here is our first encounter with the orange Propulsion Gel within the game and within this Portal 2 walkthrough. So let's test this orange gel. Next to the vent for the orange gel is a platform a bit higher up with a push button. Use portals to get up there. Now put the orange portal on the ground right under the orange gel dispenser while you put the blue portal on the single wall that has the yellow black circle on it opposit the ramp. Now it is time to press the button. The orange gel splatters all through the room and covers the way to the ramp. Because the orange Propulsion Gel makes you faster you go to the wall and use the way over the orange gel as a warm up to make the jump over the abyss.
Over here there is a wall with a yellow black circle on it that can hold a portal right around the left corner, so put the orange portal on it. Now step back a bit and look back to the push button and the gel dispenser. Put the blue portal on the ceiling next to it and jump back there through the orange portal. Here you paste the blue portal on the ground under the orange gel dispenser and turn the orange gel on again. The orange fluid covers the whole hallway on the other side of the room. Jump through the blue portal back over there and use the momentum you get from the orange gel to jump over the ledge there.
We are close to the vintage companion cube now. Just use a portal behind the cube and one portal on the wall opposite the cube and you can drag it out. Now use portals to move back to the huge room from the beginning step by step. Once you are in the huge room put the vintage companion cube onto the red switch on the ground and you will see, the ramp moves up. With the help from the orange gel and a long enough start in you can now make the jump to the other side where there is the exit near. But the exit is still closed. But on the right side of the exit door there is yet another concrete floor tile with this yellow black circle on it. Put a portal on it and the other portal to the other wall with the yellow black circle on it at the end of the orange gel on the ground all across the room. Jump through the portal and slowly walk up the ramp. Take care, so that you don't fall into the endless pit. Now run down, all over the orange gel and through the portal. With your momentum you will jump up to the push button next to the door. Press this button and the exit opens up.
On the way to the next part of this test sphere you can sidestep a bit into a bureau and see another picture of Cave Johnson, and GLaDOS will even mention that these people look familiar to her. So now get into the next part of the forth test sphere in the antique Aperture Science lab. 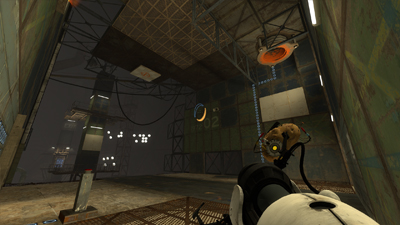 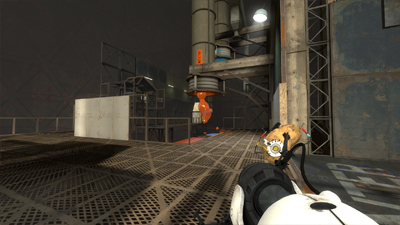 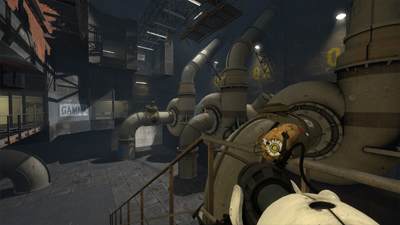 You can see 1978 and 1982 written on the walls. Maybe 2011 is all upstairs, who knows. After all you should enter the door and get to the walkway right above you inside the building. After you get around the corner there is a wall that can hold a portal. Up here you get out again and you are a bit closer to your aim than before. Use portals to get to the place in front of where there is Pump Station Gamma written on the wall. Enter the open door and there you are inside the pump station gamma.
Inside here you walk along the hallway to the left and turn on all the switches here. This turns on the blue, the orange and the grey Conversion Gel for the next chambers. But this also turns on some stompers. But when you use a portal on the wall at the end of the hallway and one here you are out of here in no time. Now you can see the mess the grey gel made. But this is good, as the grey gel allows you to put portals on walls and ceilings (and grounds) that wouldn't hold a portal before. So you can beam up to the lonely platform in the middle of the room above the pumps and use the blue gel to jump over to the other side. Walk through the blue energy field and be quick when you run under the stompers over the orange gel and you will finally reach the exit to the pump station gamma. But what is going on outside here?! You can't go on?! So put a portal on the slanted wall here, outside the pump station gamma and walk back. You can see the wall with the yellow and black circle on it behind the stompers, so put another portal on this wall and run into it over the orange gel as fast as you can. This throws you over to the walkway and you can enter the enrichment center. Get through here until you see the portrait of the old Cave Johnson and go through the door to the right of the portrait. Here is a button you have to push to open the door to the elevator to the next test sphere. 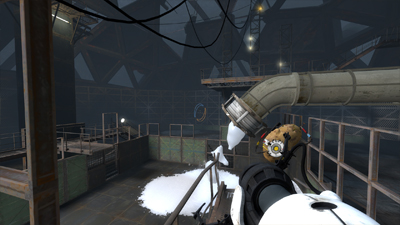 Walk past the numbers 1982 on the side of these fencing walls and have a look at the grey gel. So put a blue portal directly under the gel flow and an orange portal somewhere besides where the gel hits the ground. This will cover more surface with grey Conversion Gel and you move the orange portal to the newly covered surface to cover even more surface with grey gel. Continue doing so until you finally cover some ground outside of the fenced in area. Then put the orange portal on the newly covered ground out there and jump outside through the blue portal. Out here you have to direct the grey gel with the orange portal towards the two towers and especially between them and cover the walls of the towers that face each other. Once there is some grey gel on one wall put the orange portal there and cover the wall of the other tower, then put the orange portal there and continue until you reach the top. Now it's time to cover the slanted platform next to the higher tower with the grey gel. Once you did that portal up to the walkway around the higher tower. Up there put one portal on the slanted platform and the other portal there where you will land when you jump down from the walkway. Jump through the portals and you will land on the elevated building that will bring you to the exit without problems. 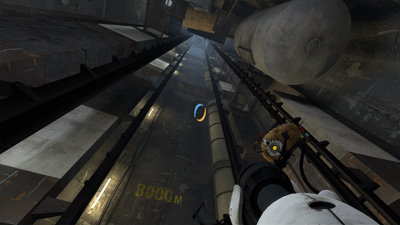 The exit leads to an elevator shaft that claims to lead to the surface. So use portals until you reach the elevator cabin high up there. Jump on top of the cabin and shoot a portal on the floor of the cabin. Search around and shoot another portal on the ground of one of the edges around that is low enough. Jump through the low portal and get thrown up to the next level. Here you have two sides that can hold a portal, put the portal on one of them and then jump through the portal on the floor in the elevator cabin. While you are jumping up and down you will notice the slanted concrete wall up here that can hold a portal. Shoot the portal in the right color on it and you are at the exit to the elevator shaft. But we are still far from the surface.

Climbing up to the central pump station 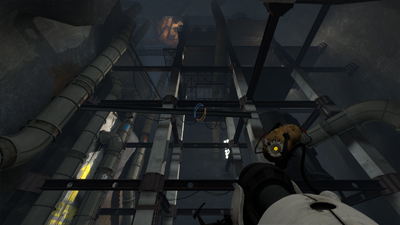 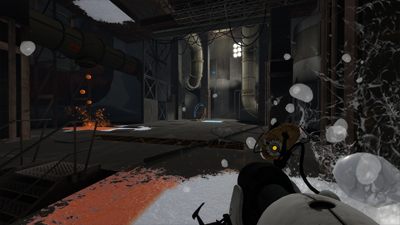 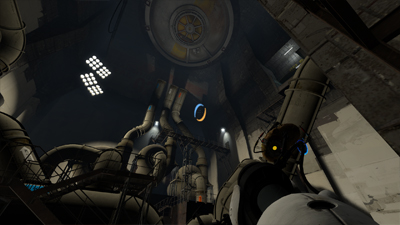 Shoot a portal above one of the doors at the end of the metallic walkway high up in the sky and one portal against a wall down here and get up onto the walkway. Now take look around. You'll notice the control room that is glowing in a bright blue. You will notice it, as the rest of the pump station is all grey. Shoot a portal to the small concrete part on the wall directly opposite of the control room (when facing it from the walkway it's the wall to the right) and one portal to the ground, right where the walkway is open to jump out. So jump into the portal on the ground and reach the control room. Guess what, play around with the controls here and look a this,
Content


the huge valve opens and another elevator comes down for you. You better get into this elevator and it will bringt you back up, there where everything looks new again and lost that vintage look and it also brings you into the next chapter, but more about this after you turn the page.