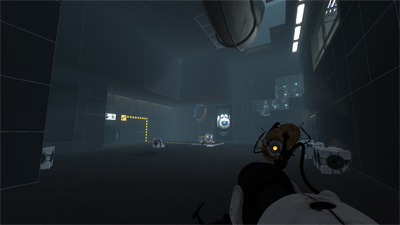 So we are back in the newer part of the the Aperture Science Labs. Go through the door and follow the walkway until you are in this small control room above the test chamber. Wheatley is babbeling something, he probably desperately and most of all unsuccessfully tries to teach the crippled cubes some tricks. But this is not that interesting for you, so turn away from the huge chamber and shoot a portal through the small opening in the wall behind you and another portal into the control room to jump through and land on another crate walkway outside of the test chambers. Follow this walkway until you finally are inside the testchamber. Get one of the broken cubes and put them onto the red switch on the ground. But somehow the exit is blocked now. After Wheatley and GLaDOS are done with talking about paradoxes Wheatley opens the door for you. Artificial Intelligences talking about paradoxes is a bit paradox in itself, but nevermind. 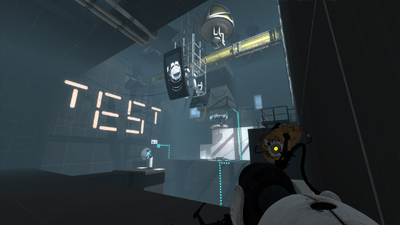 Now we enter the first test chamber that our old favourite idiot Wheatley designed all by himself. And it's just as stupidly easy as you could expect. Push the button and the Weighted Companion Cube will fall out of the cube dispenser and land on the red switch on the ground and this will open the door already.
But you can also refuse to do anything and just wait and listen to Wheatley go crazy...
Portal over to the switch and exit through the giftshop, no, through the exit.
But Wheatley is not only stupid but also lazy, so he makes you solve this chamber again. Do the same as you did just seconds ago and then you can exit to an elevator to more of Wheatley's test chambers. 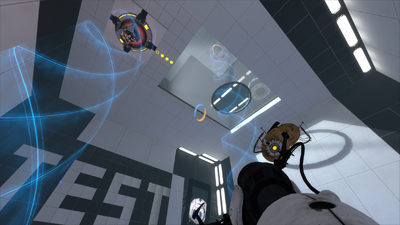 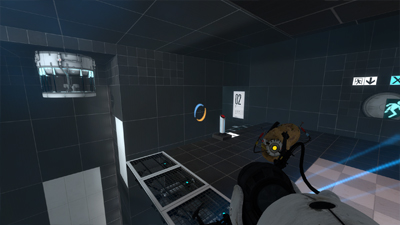 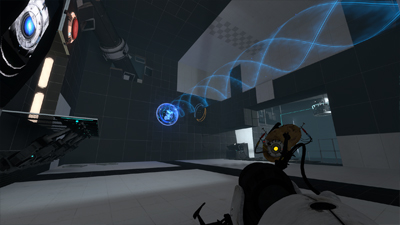 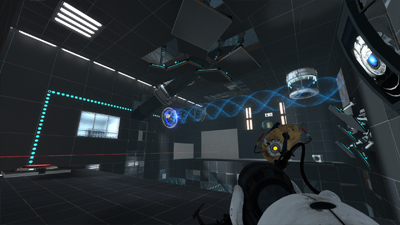 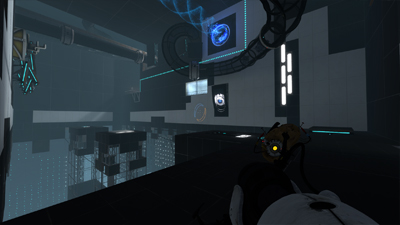 A true classic. Not just because of the music, the solution is really easy once you got it. Actually you just have to have the transport beam going up from the lonely platform in the middle of the room and then use the catapult to jump into the transport beam. Once you're caught by the beam and the transport beam took you to the top of the chamber you just shoot another portal to the slanted platforms opposing the exit. You will now fall down into the portal below you and just jump to the exit. And once you are there you do the same for the weighted companion cube that will come out of the cube dispenser once you pressed the button near the exit. Once the cube landed next to you, you just put it onto the big red switch on the ground and the exit opens up for you and you can use the elevator to reach another test chamber. 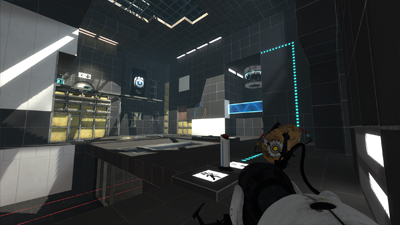 Well, well, it's just getting complicated, but not difficult. Just press the button to see what happens and what path the weighted companion cube flies. Sadly the companion cube dies when it passes through the blue energy field. Well then, shoot the blue portal to the end of the light bridge and the orange portal high on the wall opposite the button to be there as a barrier and stop the weighted companion cube in flight. Once the cube landed in front of the hidden turrets and didn't burn to dust shoot an orange portal on the wall down there as a barrier between you and the turrets and then jump in the pit and get the cube. Carry the weighted companion cube around one of these corners, so that the turrets can't hit you, shoot one portal high on the wall where you already had a portal to stop the cube in flight and the other portal to the wall right next to you and you can easily escape with the cube.
Now you shoot a portal to the end of the lightbridge again and the other one to the single white platform on the wall to the right of the image of Wheatley. Use the catapult to shoot yourself and the cube against the lightbridge and you will stop on a metal walkway. Walk along the walkway a bit, then shoot a portal in front of the turrets to guard you with a lightbridge and after that it's finally time to use the metal walkway to walk behind the blue energy field, jump down and put the cube onto the big red switch on the ground. And voila, the exit opens and you can even portal yourself up to the exit from behind the blue energy field. Take the elevator to get to yet another test chamber. 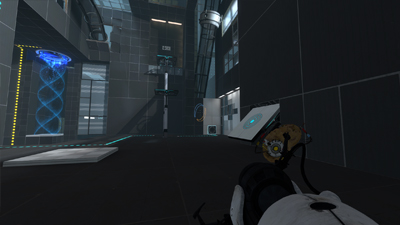 Nobody knows why, but the next chamber is chamber 11. Wheatley tries everything to confuse you, but fear not, the solution is right here. Mabye he wants you to finish faster so he is done with you faster...
At first we want to get the crippled cube. Shoot a blue portal to the end of the transport beam and an orange portal directly onto the single plattform on the ground right in the middle of the room right there when entering the room. Jump into the beam and once you are high up with the transport beam shoot the blue portal onto the slanted plattform with the lightblue circles on it right next to you and the beam. You get thrown right to the broken cube.
Pick up the broken cube and jump down into the ditch to the laserbeam and put the broken cube into the laserbeam. The transport beam will stop working. Now portal up out of the ditch and put a portal onto the slanted platform above the laser emitting pod we just blocked with the crippled cube and the other portal onto the slanted wall we already used right next to the entrance to this room. Now use the catapult right next to the entrance and after the catapult threw you all across the chamber you will find yourself next to a mirror cube, and this is just what you need right now.
Of course you take the mirror cube with you. Put it into the laser beam so that the beam is reflected straight into the wall down there. Take the broken cube from down there with you and leave the ditch through some portals. Put the broken cube right onto the single plattform on the ground in the middle of the room and leave it for a while.
To the left of the slanted wall with the lightblue circles on it is another laser pod that just waits for the laser to come in, so put a portal on the short wall opposing the laserpod and another portal down in the ditch right where the reflected laser beam hits the wall. Now the laser beam should hit the pod in the wall and one step of the stairs leading to the exit will come down to you. Stand on this elevator step left to the pod you just hit with the laser beam and shoot one of the portals to the wall behind you so that the laser beam does no longer hit the laser pod and so the elevator will go back up with you on it. From up here you can see into the ditch, so shoot the other portal under the mirror cube to make it move out of the way of the laser beam. Once the laser beam hits the laser pod in the ditch again the transport beam will start working again. So shoot one portal right where the transport beam hits the ground and the other portal onto the single plattform on the ground where the broken cube is. This moves the broken cube up and once it hits the red switch on the ceiling the other step will come down behind you. Step on it and remove one of the portals to make the cube fall down again and the step moves up again and you can proceed to the exit. 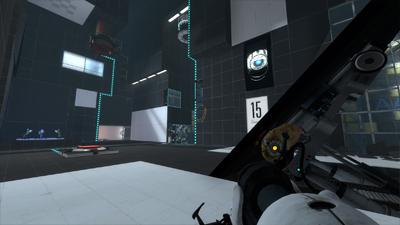 Oh, there is no exit to test chamber 15! But Wheatley creates an exit for us. And if you look really close you can see a robot running out of the exit. This is probably P-Body searching for an exit. But this is not what it's all about, we have to reach the exit first...
Move towards the push button in front of the abyss and press it. A broken cube comes down but stops somewhere above you. But this doesn't matter, just turn around and step on the big red switch on the ground to make the transport beam appear. A blue portal on the ceiling above the transport beam and an orange portal on the wall to the left of the transport beam makes the cube move and it moves towards the abyss. Once it reached the end at the wall shoot the orange portal right under the broken cube and the cube will now move towards you. But don't step off the switch in the ground too early, as this keeps the transport beam alive.
So shoot a portal through the hole in the glass wall in the one edge and another portal to the wall right next to it and carry the cube through the portals and put it onto the second big red switch on the ground behind the glass wall and then leave this small room just like you came in. Step on the first red switch on the ground again to turn on the transport beam and make the orange gel move towards the ramp. As soon as a whole lava lamp full of orange gel is above the ramp step off the big red switch and gel will splat down and the whole way from the wall to the ramp should be covered in orange gel. If not, just repeat what you just did until everything is covered in orange gel.
Now we need the cube again, so get a new one or grab the old one, doesn't matter, but grabbing the old one is faster, and then put it onto the big red switch in the ground out here to turn on the transport beam forever. Walk past the ramp on the left side and shoot a portal into the middle of the wall to the right, right behind the blue energy wall and another portal to the ceiling above the transport beam. So the transport beam is now going all across the hall over there and you can use the orange gel to get enough speed to jump over the ramp right into the transport beam that will bring you towards the exit. Wheatley tells another bad joke and then we can go already.
There is no use in jumping into the transport beam directly and let it drag you all across the gap over there as the blue energy barrier deletes all portals... and this is not good. 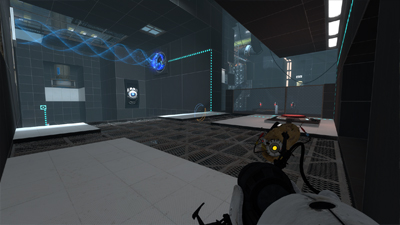 Here Wheatley prepared a nice trap for you, but you have to use the catapult anyways. This will bring you to a single plattform surrounded by even more mean spiked plattforms ready to smash you and this is where the next and last chapter starts...