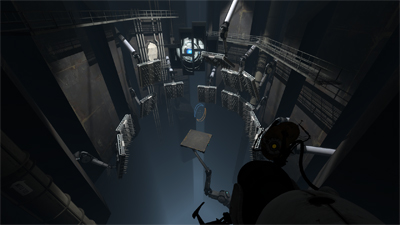 So, here we land on the single platform surrounded by spikey platforms ready to smash you. Shoot the first portal against the crumbled concrete wall high up next to Wheatley's image. And once the grey gel starts dripping you shoot the other portal onto the grey gel. The grey gel comes at you through the portal and you can now put a portal under yourself and get away from this trap alife.
Wheatley is still talking and tries to convince you to stay and when you go back now you can listen to him trying to convince you to voluntarily jump into the hole now, very funny. For the lulz you can jump in.
So, now follow the way behind the scenes of Aperture or Wheatley Science. At the end of the walkway you put one portal on the single platform under you and one portal on the platform to the right and above of you. Now jump in the portal under your feet and get thrown onto another walkway. Follow the walkway until you reach the poor little broken cube that Wheatley destroys even more. So be fast, shoot one portal high to the wall on the other side of the gap and one portal to the door frame here on your side of the gap and you are on the other side in no time, and also in the next part. 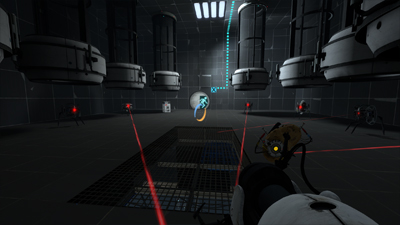 As soon as everything calmed down in here you shoot a portal right to the wall in front of you and the other portal to the ceiling of the chamber right in front of you. Through the portals you enter another death trap, but the turrets aim at you but they won't fire. Good thing! So let's get out of here!


Here hides is a more nerdy easter egg.
Eric Tams, one of the Portal 2 developers said in an interview that they used portals that seamlessly connect rooms within the making of the game so that they can adjust things easier and so they could create impossible space, meaning impossible geometry without the player really noticing. After everything in the leveldesign was set they connected the rooms normally and left only one of these portals in. And this last portal connects this room with the rest of Aperture Science. Or meanwhile Wheatley Science.
To find our more, check out this interesting Video on YouTube at 4:00.

One small jump and you are heading towards the 3 turrets. Just put a portal to the end of the transport beam here and the other portal to the wall right behind the turrets until they are all gone. Now you jump into the transport beam yourself and let it drag you over the water. Watch out for the next death trap (the wall will open and show the trap) and jump out of the transport beam before reaching the open wall and land on save ground. Then walk through the blue energywall.
Here it is quite obvious what to do next. Put the orange portal to the end of the transport beam and the blue portal the the white wall, so that the transport beam drags you over the open space outside. But be careful, one of these spikey platforms follows you. But there is a concrete platform coming in last minute, just look in the direction the transport beam goes. Shoot the blue portal on the incoming platform and the next transport beam will bring you to another walkway, safe and easy.
Now everything collapses in front of you. Again. But this time blue gel is involved and you can just jump over the gap to the other side. On the other side of the gap the door frame and the ceiling of the room, where the turrets aim at are a good path. You will find yourself next to the red switch in the ground, which you should activate now by stepping on it. The blue gel starts to flow. Put a portal under the gel flow and the other portal to various other locations on the wall to the right of the turrets until the are all covered in blue gel and finally gone. Now find a way to the catapult in the room you are and this shoots you back on track to the exit. 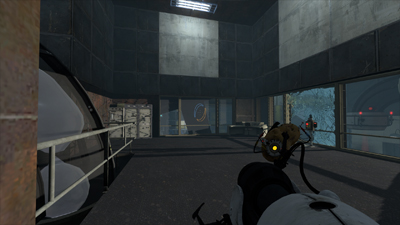 Well, here you enter the room and just press the button to watch through the window where the bombs land. Exactly where the bombs come down and explode you put one portal and the other portal to the wall above the button that you press right again after this. The bombs make the pipeline with the grey gel explode and the grey gel is splattered all over the place. Through the grey gel you can move forward to where the bombs came down and enter the next room.
Here you jump on the converyor belt and Wheatley turns it on already. Be quick and sidestep to the walkway to the left before the spikes smash you. Now you put a portal on the wall on the opposite side of the pipeline with the orange gel (this is the wall, that is farther away from you) and one under the bomb dispenser. Use the button to call for the bombs to come, fall through the portal and destroy the pipeline with the orange gel in it. The leaking orange gel is collected with a portal and you put the other portal to the end of the coveyor belt. With the orange gel you now are fast enough to run along the conveyor belt and even jump through the portal at the end of the belt. 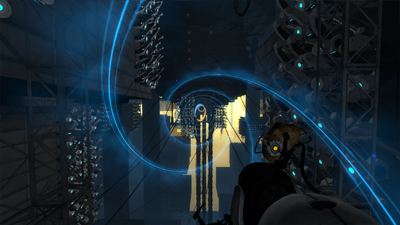 Here you walk along the hallway to enter a huge room. High up in this room is a transport beam but you cannot reach it by now. So put a portal onto the wall at the end of the small hallway in this room and the other portal there where the orange gel hits the ground. The floor in front of the portal will get covered in orange gel. Now remove the portal that catches the orange gel and put it under the transport beam. Now it's time for you to run along the orange gel on the ground and jump into the portal on the wall and shoot yourself up to the transport beam this way. Jump out of the beam at the end and walk up to the door and inside the room get up one storey and get ready for the final boss battle...
on the next page...