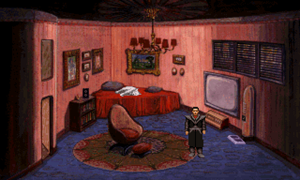 At first get to Lamb's apartment in the nice Bell Vue area (the middle of the second level). Lamb's apartment is the one next to Reich's apartment where you got the biker magazine.
After entering take the Video Cassette titled Pussies on Parade and put it into the Video Recorder. Now we know what kind of perverted stuff Lamb is into. He must have been the grandfather of the internet...
Alright, so now please do what you are here for, you are here to feed the cat, remember? If you want to feed the cat now, you can do so, by pressing a button on the machine next to the cat's bowl. 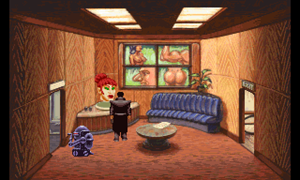 After that go to Dr. Burke's surgery, it's on the very left end of this level. When you're there talk to the hololady. To do so activate the projector. Uh, she won't let you in, so ask Joey to talk to the Hololady that she should open the damned door, so when Joey wants to know what to say use the last option. Now you can enter and talk to the doctor. In case you can't mention the Schriebmann-Port to the Hololady you have to go back to Anita in the pipefactory and ask her how she became a D-Linc and she will explain and also explain the Schriebmann-Port. 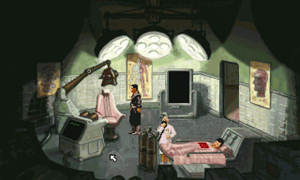 After talking about the Schriebmann-Port with the Hololady you can enter Dr. Burke's practise. Order the Schriebmann-Port from him. But Dr. Burke wants some of your organs in exchange for a Schriebman-Port. So try giving him the first 2 organs you can offer. You are too healthy for him, so try the least and the last option. If only you were a robot, then you had no problems in trading in your nuts... so finally you get your Schriebman-Port. After this operation talk to the Doc again and tell him you need to get down one level, down to ground floor. He will advise you to anchor again. So let's check that out, Anchor is found in the insurance office on the right end of the second level, just next to the TravelCo travel company. 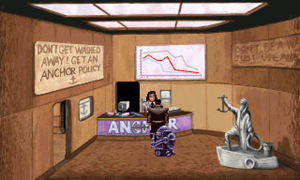 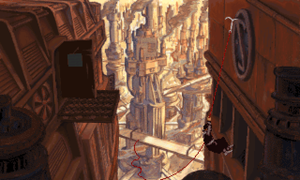 After you finally got the Anchor (from Anchor) get back up one level to the recycling plant with it. Don't enter the recycling plant through the furnace but through the now open and unguarded entrance from the left. Get up the stairs you once fled from Reich to and enter the fire exit.
Out there get out the anchor you stole from Anchor. Tie the anchor from Anchor to the red cable and build a grappling hook. Throw this newbuilt grappling hook to the sign of the security police on the opposite side of the gap. 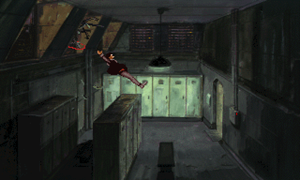 Ta ta tata, Indiana Jones is nothing against Foster. Here we go, right into the headquarter of the security in town.

Do you see the lockers in the back? The second from the right is Reich's and you can open it with his ID-Card, but there is nothing useful in there. 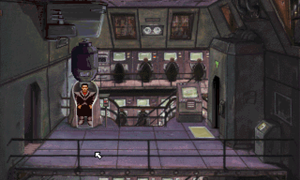 So just go straight into the next room to finally enter the Cyberspace called LincSpace there.
You do so by using your ID-Card in the slot next to the interface and then take a relaxed seat on the chair for the interface and drift away into the unknown virtual worlds.