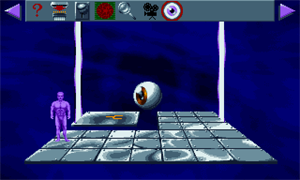 After you changed clothes and Foster wears his coat again you step out of the pipe factory and head for the police station again. There you go for the room in the basement with the LINC Node. You can just enter through the door and use your, well, Reich's ID Card on the scanner up at the door as you hacked it to access all areas already. This time on the LINC Space Port you use Anita's ID-Card for logging in. Now you got some new and exciting things in your inventory. 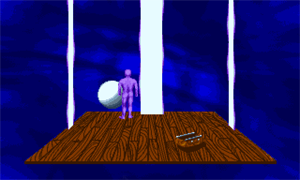 Anita has quite some neat hacker tools on her ID Card. Like for example the blind tool, which we will use now. So go to the second room and use the blind tool on the eyeball that is always watching you and enter the door he's guarding very fast. You can pass now easily as the eye won't shoot you out of LINC Space any more as it is blinded now. Hurry up though, the blind state won't last forever on the eyeball guardian. If you can't make it through in time, set the game speed to veeeeeeeeery slow, enter the door and set the gamespeed back to a speed that you enjoy playing with.
At the crusader in the next room just go up into the door you can enter. 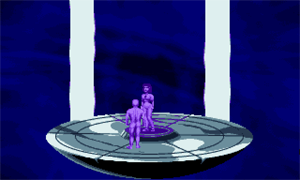 There you use the playback function from your (Anita's) inventory on the well in the middle of the room. A podcast starts running. Anita left a message for you here before she died. She tells you to contact Eduardo in the park and get into the old subway system beneath the city as this is the only way to enter LINCs secret base.

Now you got enough information, so log out of the LINC Space, use Reich's ID Card on the scanner next to the door and get down to the ground level again to find Eduardo and the old subway system.