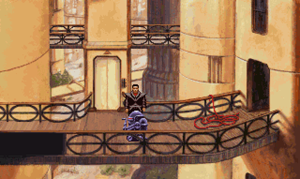 Oh, what lucky coincidence, the cable got stuck right here and didn't drop even farther down as you cannot get farther down yet. So take the cable with you.
Leave the elevator screen to the left now and at the branch take the way to the back.
You enter a nice residential area called Belle Vue where the privileged people like security officers and military people live. Also the LINC Security man Reich that followed you even into the furnace beneath the recycling plant lived here. 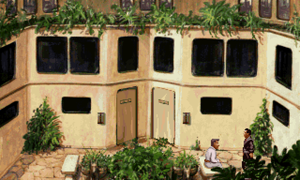 So use Reich's ID-Card on the lock next to the left door to unlock and open up the door to his apartment. As Reich is torn apart next to the furnace he won't mind you stepping into his private rooms and looking around or even taking his things with you. 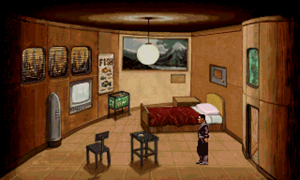 Enter Reichs apartment and get in. Move the pillow on his bed around and voila, a magazine appears. Take the biker magazine with you. There is nothing more you can do in here, not even the Television is working. I bet they watch Futurama a lot on this TVs in the future. Or maybe reruns and remakes of great film from the past.

Step outside and wait for Lamb. He sometimes walks on by, so just talk to him. Talk with him about who repaired the elevator, but he reacts a little bit snobbish. 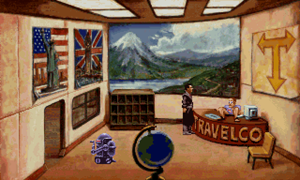 After talking to Lamb get back on the track that's connecting everything in this level and walk to the very right.
Here you will find the Travel Angency called TravelCo and you should enter the rooms of TravelCo now. Talk to the man behind his desk who lazily put his feet up on the desk (probably to get you into vacation mood) and ask him politely for tickets, the economy variant is what you are after. He won't give you any, there are waiting lists and it seems you just entered one of these waiting lists from the back end. But after talking with him about a virus on his computer (ask Joey first), you know what to do with him, you can clearly see that he's a biker, so give him the biker magazine you just found under the pillow in Reich's apartment. He will be very interested and won't hesitate to prints you the tickets out at once. Don't forget to pick them up!