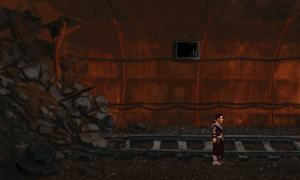 Finally we arrived in the old subway system below the city Anita was talking about in her message. Now there is no turning back. And this exit this first screen to the right and you will reach a junktion.
The path to the right is a dead end with only trash and rubbish at the end blocking your way, and there is no way through. So you better follow the path to the back of the scene. Go farther one more screen and you will see a hole in the wall and nothing else. There you better save your game before listening to my next suggestion. Just do it! 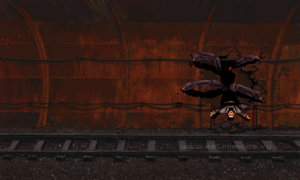 Just for fun go on without doing anything. You will see a very cool animation for this! But afterwards you are very dead. That's why I told you to save your game. So reload your savegame from shortly before you die a gruesome death at the hole and continue playing. Or kill Foster again, you have the savefile at the right position now...
Anyways, there is a cable going along the wall about at the height of Foster's hips. And shortly before the hole the cable gets thicker and you can hover your mouse over the thick spot to see Socket displayed. And this is the place where you put the bulb you are still carrying around. As the mutated monster is afraid of the light this will keep it away from you and you can pass by this monster in safety without being dragged through your own blood into the darkness. 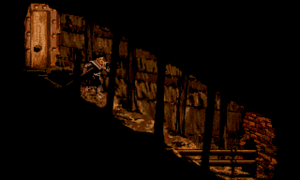 You now reach an old Subway station. It is the museum station. You better save your game in here again (probably on a new file if you want to kill Foster again...) and then continue on your path. You enter a small tunnel in which you just need to click on the dark hole that could be an exit in the lower right and Foster will run there without loosing his life but with a rush of adrenaline in his blood. If you are not fast enough you might get hit by the collapsing ceiling. 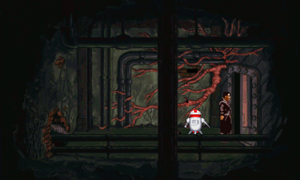 After exiting the tunnel you will find yourself in front of a blocked door and in front of some ugly pulsating veines on the wall. This is probably the entrance to LINC's command center. You can't open the door so you have to have it opened. Smash your crowbar into the plaster and then again smash it into the now exposed bricks to use it as a lever and break out some bricks. Once again we use the Metal bar. Now smash it into the swelling in the vein. This doesn't do much of a harm so pick up the brick you just scraped out of the wall and smash it onto the crowbar that is stuck in the vein. Hah, finallay the vein is hurt and bleeding. Wait a second and a droid will come to heal the vein again. And the medbot comes through the door and leaves it open, so get in!