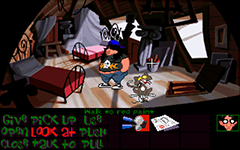 And here we are 200 years in the past with Hoagie the roadie and no electricity. And our friend Laverne is still (or not yet?) trapped on that tree 400 years in the future from there. Let's get her down.
You can take a look at that nice Kumquat tree next to the outhouses as long as it still is there, but then walk past it to the left and enter the huge mansion / inn in the past through the opened door. In the lobby go to the right, up the stairs. Follow the hallway to the very end on the right and also go past the horse, up the stairs again. You are in the attic now. Here you see a cat playing with a toy and a bucket of red paint. Grab that bucket with the red paint and walk back all the way to the Chron-o-John. And now paint that Kumquat tree red. We just created a cherry tree.
Now get back into the house and from the lobby get to the main hall through the back exit through the huge door in the background (to the left of the mummy). You meet the funding fathers of the united states there. 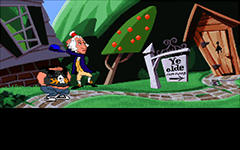 So get to George Washington and introduce yourself and ask him about his makeup. Then talk about Cherry trees and provoke him with the 2nd option and say he can't chop down the tree. And what do you know, this is exactly the tree Laverne is stuck on in the future. So she is freed from the tree but not free to roam around in the future yet. So let's switch to Laverne now. 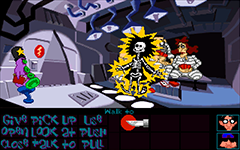 Laverne is still trapped, this time in a future prison, guarded by a tentacle. What sounds like a wet dream for every japanese person is very annoying in the game as you just can't walk around and do stuff. Talk to the tentacle guard and tell him you are not feeling so good.
The tentacle guard sends you to Dr. Tentacle. After the Doc is done with his routine check he leaves you alone, so grab that tentacle chart on the wall and then get out. The tentacle with the net will catch you when you try to go outside so go into the back exit from the lobby. You enter that hall from the first door on the left (besides the main entrance to the mansion), now enter the second door from the left, the kennel. You get put in jail again. So talk to the tentacle guard again and say you have to use the toilet. 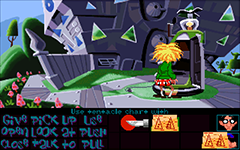 Finally outside get to the Chron-o-John and give the tentacle Chart to Hoagie. Just click on the item and then click on Hoagies image, that's the fastest way to switch items between the three characters. When Laverne is not outside the future mansion she cannot send or receive items but it works when she is next to the Chron-o-John and soon it will work everywhere, just like it work with all other characters already at the moment. 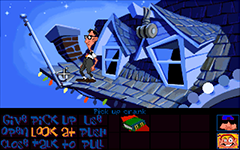 Switch back to Bernard now. Dr. Fred has bad news, as always. So get up these stairs and from the lobby enter the back hall. Climb through the fireplace in the chimney and make Santa proud. Up on the roof get the crank handle from the flagpole and send it to Laverne already. You can now do this from the roof already. 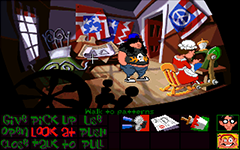 Get back into the mansion and walk up the stairs again. Enter the middle door in the hallway and meet Betsy Ross, who is sewing one flag design after the other and we just want to give her yet another design. Just put the tentacle chart from the future onto her design patterns and let time do its job. In the future the design for the american flag will change drastically. 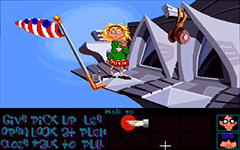 Back with Laverne we go back to prison by talking to the tentacle guard. Then we complain about not feeling so good again. We get taken to the doc again, the doc is not here so we can roam around some more. Exit the doc's place, enter the back hall from the lobby and climb through the fireplace chimney onto the roof again. Stick the crank you just got from Bernard into the according crank box and reel in the flag with the attached crank. And there we have our very own tentacle costume. Put it on and now Laverne is free to go wherever she wants to go in the future. Well, everywhere, except for the clock that leads to the lab and this is our final goal for the future. If I did everything correct it should be possible to play any of the next 3 pages in any order you like, so you can decide which era you want to complete first ...