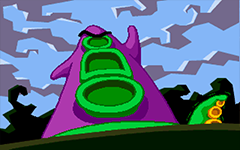 On a nice but fateful sunny summer day Purple Tentacle drinks from the Sludge-o-matic sewage behind Dr. Fred's mansion and mutates and grows a pair of arms or hands (but no fingers). So his frightened Tentacle-friend Green Tentacle sends the incredibly quick post hamster to his old friend Bernard Bernoulli and asks him for help. Bernard invites his two friends, the Roadie Hoagie and the medicine student Laverne to visit the maniac mansion of Dr. Fred Edison again and also save the world while they are at it. 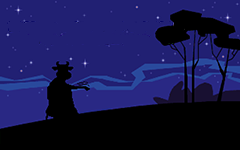 After reading the letter the 3 underrated heros get their stuff together and go for one hell of a ride towards the maniac mansion. That's quite the effort for an intro sequence and some credits there. So after the ride they all arrive safely at the mansion and have to find Dr. Fred's lab. 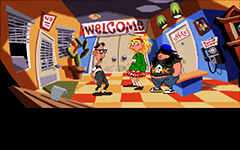 The task is clear, find that secret lab. From the starting room, the lobby of the mansion, you can only reach one other room, Dr. Fred's office. But that's not the secret lab, the secret lab is hidden, otherwise it wouldn't be a secret lab! So get back into the lobby! You can't go back out or into the back of the room. Upstairs is also blocked for you at the moment so your only chance is to find that hidden passage. The old grandfather clock looks very suspicious, so try opening it.
Voila, a secret passage to a secret lab. Exactly what we were searching for. So just jump into the clock and see what happens now. 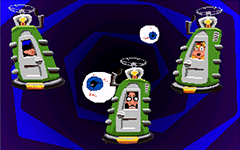 Well then, Bernard rescues the two tentacles and everything is fine!
Would be a bit too easy and short for a game, wouldn't it? So things get worse from here, Purple Tentacle just runs off to gain total world domination and elimination of all humans or enslave them. So Dr. Fred wants to send the 3 heros back in time to stop Purple Tentacle, but everything goes wrong. Hoagie lands 200 years in the past, Laverne on a tree 200 years in the future and Bernard is in the present and not even yesterday.
To give Hoagie something to do we need to find Dr. Fred's plans for his super battery.

And we start playing, just walk a bit to the right and pick up that TO DO list in the background, called paper in the game. That't the plan, so what do we do with it?
Ah, Dr. Fred sends it back in time via the Chron-o-John. So this is how you exchange inventory items between the characters. And you switch characters with the image next to your inventory of course.
So let's get cracking and get Laverne down from that tree. More on that on the next page.