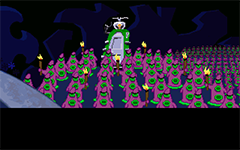 After all our three heros completed theirs tasks in their timezone, after Hoagie built und charged the Battery, after Bernard got the diamond and after Laverne won the beauty contest and powered up the Chron-O-John, they all return home safely. Well, Bernard was here all the time anyways. But it doesn't stay this happy and peaceful for long... in a long cutscene Purple Tentacle comes back from the future and brought his army with him and tries to enslave the humans in the present this time. 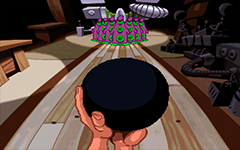 Laverne, Bernard and Hoagie are turned into some kind of monster (...dudes) and old Purple Tentacle finished his shrink gun. What a clever design for a gun, you can pull the trigger, even if you don't have fingers! So Old Purple Tentacle hunts our three headed mutated monster friends and they somehow have to get past him to reach Green Tentacle's room. We need the bowling ball to get rid of the Tentacles in the secret lab.
So just open the middle door in the hallway and enter Dwayne's room. Of course you need to be still shrunk, so you can just walk through the mouse hole and reach Green Tentacle's room. Grab that bowling ball and get back into the lab. Guess what, get rid of all the pins, uhm, tentacles with the bowling ball. 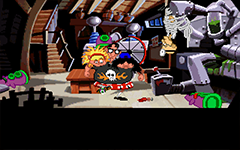 Congratulations, you won Day of the Tentacle.