The Past with Hoagie
more games

The Past with Hoagie 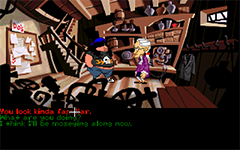 We are back with Hoagie in the past and have that plan for the super battery on us. And we have to give it to Red Edison.
But Hoagie should still be on the second floor of the mansion in Betsy's room. We are done here, get out into the hallway and enter the door on the very right. This is Ben Franklin's room and we grab his bottle of wine.
Get out onto the hallway again and enter the room on the left. Use George Washington's bed to make it all messy, then use the cord to call for the maid. The messy bed keeps her busy so Hoagie can leave the room and steal the soap from her cleaning supplies on her cart.
That's it for here for now, get down the stairs and go looking for this Red Edison fellow. Of course he is in his secret lab. And this is in the same location 200 years in the past. So step into the lobby of the mansion and climb through the grandfather clock to find Red Edison in his secret lab.
You can talk to this misunderstood genius if you want, but rather give him the plans for the super battery and he will order you to bring him salad oil, vinegar and gold. And this is Hoagies main task in the past for now. But while we are here we grab the left handed hammer to the left of Red Edison.
Climb up the stairs and get into the main hall with the constitutional fathers. Give Thomas Jefferson the wine and he will put it in his time capsule, so some years later this will be vinegar, one of the ingredients needed. 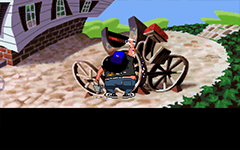 Through the swinging door you reach the kitchen. Pick up the Spaghetti and the Oil. Get one room farther and grab the bucket from the ground and the brush from out of the closet. Open it before grabbing the brush, otherwise you will hurt your hands. This storage room is completely empty and there is nothing more you can do in this room anymore. So get back one room and fill the bucket with water at the water pump already. And while we're at it, put the soap you stole from the maid into the bucket too. Now we could clean something with this, why not the carriage in front of the mansion. Get out there and start brushing the carriage. Of course this starts a rainstorm and flashes come down. And Benjamin Franklin is not that happy with the rainstorm, so he stops his electricity experiments and comes inside until he finds a better and waterproof material for his kite. So far so good, and while we are out here at the carriage open the mailbox and get the letter inside. And now we need some help from Bernard.
Send the letter from the mailbox and the red paint to Bernard, then switch to the present. 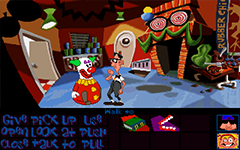 Get down from that roof. Climb through the chimney and look around. Open that grating next to the fireplace and walk to the right. Don't get caught up in an endless conversation with the salesman, just quit him, we can't do anything useful with him yet. But if you want you can ask him about the cigars and watch Bernard's head explode for funz...
Continue even farther to the right in that mainhall and find the chattering teeth. Try to grab them and they will jump away. Mean beast! Go chase the teeth and corner it so that it will fall into the grating. What an easy prey it is now, take the trapped teeth with you. Now get back into the lobby. Grab the Help Wanted sign from the window and also the flier in the foreground of the lobby. 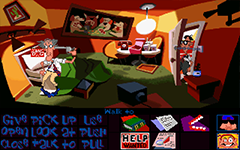 Get upstairs and enter the middle door in the hallway. There is Dwayne, the depressed salesman. He even fails at shooting himself, so what about cheering him up there. Just give him the letter Hoagie just found in the mailbox and he will leave at once and also leave the door open. Get the flag gun he left on the ground and get back into the main hall to the cigar salesman. Distract him for a moment and swap the cigar lighter in gun form on the table with the flag gun, then ask the salesman about the cigars. He won't be able to light it with the flag gun, so you are now the proud owner of a new cigar. Time to send stuff through time, so send your textbook, the chattering teeth, the help wanted sign, the flier, the cigar lighter and the exploding cigar to Hoagie. Basically everything in Bernard's inventory if you follow this guide step by step... Actually you switch to Hoagie and send his can-opener to Laverne first, then switch to Laverne. Climb down that chimney again if Laverne is still on the roof. Then get upstairs and enter the first door in the hallway, the door on the left. In this room the historic time capsule is still on display. Probably the last remaining thing left from when humans were in charge and not the tentacles. I wouldn't know why the tentacles would even keep that, but this is how the story goes. And it goes like: open the time capsule with the can-opener and get the vinegar that once was Benjamin Franklins wine. Send the vinegar back in time to Hoagie and then switch to Hoagie already. 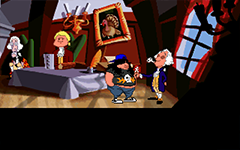 Time to get serious back in time. We already have the oil and the vinegar for the super battery, there is only the gold missing. And there is a golden quill at the politicians, so we might as well grab it from them. But it's not that easy. Get to them and while you are there throw the flier from the mansion lobby from the present into the suggestion box in the past. This adds another paragraph to the constitution about vacuum cleaners and thus a vacuum cleaner will appear in the future. But it will only be useful in the future.
Now offer George Washington the exploding cigar. He will gratefully accept the offer and get his teeth blown out if you also have the lighter on you. He needs some replacement, so give George Washington the chattering teeth. His shaking teeth tells the other founding fathers that George Washington is cold and so they light a fire. John Hancock takes off his blanket, so take that with you and get upstairs, all the way to the attic where you found the red paint. 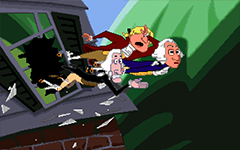 Climb out of the window onto the roof of the mansion. The fire burns in the fireplace, what would happen if we cover that chimney with a blanket now? Let's find out!
They all jump out of the window and you have the whole mainhall for yourself now. They won't come in any time soon, so get into the mainhall and and get your dirty hands on that gold-plated quill pen. And all of a sudden we have all our ingredients for the super battery. And all of a sudden the founding fathers appear back in the main hall. But don't let them get too close and leave. 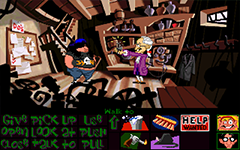 Climb back down through the grandfather clock to Red Edison. Give him the quill, the vinegar and the oil and he will instantly built the battery and store it away. But after stealing the golden quill we should easily be able to pickpocket the battery from Red Edison. And while we are down here with Red Edison hand him the Help Wanted sign and he will employ you. As a scientist you need a lab coat, so pick up the lab coat from the wall and there we have a waterproof material Ben Franklin is longing for. 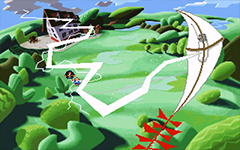 So get upstairs to the very right room and meet Ben Franklin there. Hand him the labcoat and he will invite you to join him 'inventing' electricity with his kite. Let's hope Benjamin's wet speech won't be a problem for this.
Once outside he tells you exactly what to do, but we have our own plans. As soon as you have the kite in hand put that battery into it and then wait for Benjamin Franklin to shout NOW! That's the agreed upon signal and you should just push the kite into the air and wait for nature to do the rest.
Ben Franklin will disappear and leave behind the fully charged battery. Connect this battery to the Chron-o-John and we are basically done with Hoagie and the past. You still have to do minor things to get the other characters going but I will cover that once it is time for that within the Walkthrough, so just read on!

The Past with Hoagie