The Present with Bernard
more games

The Present with Bernard 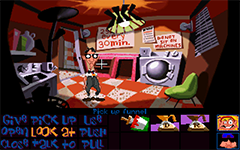 Let's get going with Bernard in the present now, shall we? We have to get rich quick to buy a Diamond to get the Chron-O-John going. So we start by stealing all kind of stuff of course!
Get Bernard to the Main Hall with the Cigar Salesman if you are not there already. Enter the swinging door to the back and grab the decaf coffee and the normal coffee. Continue one door farther to the right, open that pink cabinet in the washing room and get the funnel from inside.
Get back to the Lobby and enter Dr. Fred's office, the door between the back exit and the telephone. Pick up Dr. Fred's Swiss Bankbook from the desk, we don't need anything more here at the moment, so leave again and enter the grandfather clock into the lab again. Dr. Fred is so much on caffeine, you should really try to give him the decaf coffee. This is good for his heart and his body. But sadly he instantly falls asleep. But then again he starts to sleepwalk and opens the safe with the contract in it. But he is so fast, there is no chance you can get the contract, you have to do something else, but this sets it up already. Now leave the lab and take the stairs upstairs. 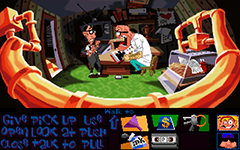 Enter Dwayne's room, the second door. He should be gone after you gave him the letter Hoagie found in the mailbox of the mansion in the past. We only need the disappearing ink from here, get it and leave again and enter the door on the right. This is Green Tentacle's room. And he has some interesting stuff. Especially the videotape on top of his stereo is interesting so take it with you. Leave Green and exit the hallway to the right.
In that small hallway enter the door on the right first. You meet Weird Ed Edison again. He calms his nerves with his stamp collection. Let's just hope noone angers him by destroying his precious collection... ah, well, just pour that disappearing Ink over the collection already!
After Ed threw his whole collection into your face you can actually keep the stamp collection book and a single stamp. That stamp is more than 200 years old and still uncanceled. This could come in handy, so we keep it. If you want you can give Ed the rest of his stamp collection back, he will be a lot more relaxed then. And that clever hamster in Ed's room also looks handy, just take it with you, no matter what. At that point in the game you could play the old Maniac Mansion on Ed's computer, but the solution for that game is somewhere else (last seen next to the chainsawfuel)... and ScummVM won't let you do that yet... 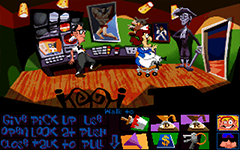 Now enter the door opposite of Ed's room. Here Nurse Edna does all the surveillance for the house. Everything is recorded on tape. So maybe recording Dr. Fred will show us the combination to the safe or give some other clue. But sadly Nurse Edna won't let us take a look at that damned monitors, so we have to get rid of her. Try kicking or pushing her just for some laughs and a good comeback from Edna... But this doesn't help at all, so we have to fix this in the past already. 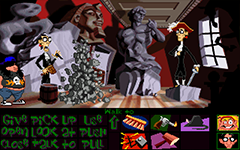 Move Hoagie to the exactly same room where Edna and Bernard are in the past and meet the Edison brothers Ned and Jed. The only difference between the two is that one is righthanded while the other one is lefthanded. And luckily we have a confusing left handed hammer on us we found in Red Edison's lab. So just replace the normal right handed hammer with the left handed hammer and watch everything crumble to dust. But this also affects the future of the past, which is the present. The statue in Nurse Edna's surveillance chamber turns around, so we better see what this does in the present... 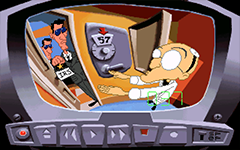 And now we can push Edna down the stairs without any further interruption and can take a look at the monitors without interruption by her. Just smack that tape you found in Green's room into the VCR and start recording Dr. Fred in his sleep walking state. Just look at the monitor and click the record button. We now have the combination on tape, Dr. Fred is gone now...
But nevermind, we'll take care of that soon enough. Just rewind the tape, set the playback setting in the bottom right corner to ep and then watch the damned thing. So we have the combination, let's get cracking and open that safe. We have the contract but of course it is unsigned. And Dr. Fred is locked up in the attic of the mansion. We better check that out.
Climb up to the roof through the chimney and enter the window on the right. Dr. Fred is tied up good, so let's ease it a bit for him and take the rope around him with you. But you still cannot get that red wrapped Fred out of here. We need a replacement. Go out to the roof and throw that rope over the pulley. Climb down all the way through the chimney again and exit the lobby to the outside of the house. 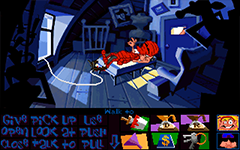 Dead Cousin Ted is patiently waiting here to be the ideal replacement for Dr. Fred's body upstairs. Grab the rope and use it to tie it to Dead Cousin Ted. Then get upstairs to Dr. Fred and pull on the rope to get Ted up here already. Dead Cousin Ted looks not really like Dr. Fred at them moment, so the IRS agent will call your bluff if you just replace Dr. Fred with Ted in this white state. You better paint Dead Cousin Ted red. In case you haven't sent over the paint, do so now, Hoagie has the red paint, then just paint the mummy and put it on the bed and replace Dr. Fred.
So Dr. Fred is partially rescued, let's hurt him some more while he is asleep. Tie the rope to Dr. Fred now (his hotspot is a bit hidden behind the mummy) and pull him out by pulling the rope from outside the window on the roof. 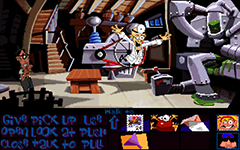 Back in the lab it's about time to kiss Dr. Fred and wake him up. But coffee is better than a kiss, so ram the funnel down Dr. Fred's throat and pour the caffeinated coffee into him. And there he is, Dr. Fred is awake and kicking. What about we ask Dr. Fred to finally sign that contract now?
But he won't be that cooperative, so just quit by choosing the last dialog option and then use whatever you want to tell him to make him sign something he doesn't even read... We have a signed contract but it is way too late to claim the royalties. If only we could send this letter out in the past...
Well, just use the age-old stamp you got from Weird Ed with the signed contract and send this to Hoagie.

Get outside the mansion to the mailbox. Guess what, put that letter with stamp in the mailbox and let the pony express get the letter. This works out in the present too... 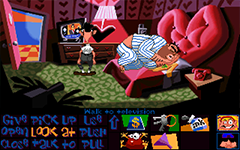 And we are rich now, let's spend that hard earned cash already on some crap we find on shopping television. Get upstairs to the hallway and enter the first room on the left. Ignore that fat sleeping salesman for now and turn on the TV. Good for us they sell a huge diamond on that TV show on Couch Potato Shopping just now. So use the telephone in that or Dwayne's room or Dr. Fred's office to call the show and order a huge diamond.

The delivery is right on time and Dr. Fred is more than happy to have a diamond at hand. That's it for the present, go save the world in the other times now.

The Present with Bernard