A Change of Fortune
more games

Chapter 15
A Change of Fortune

Mission Objectives
Arrange Rosetta at the sample array | Retrieve the Codex from Danik | Catch up with Danik
Collectibles:
1 Weapon Part 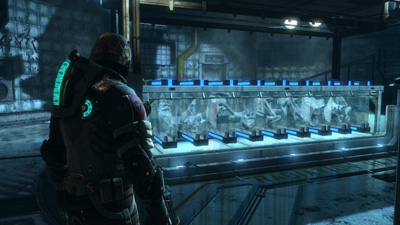 And now we have to rearrage the puzzled alien sometimes called ã­ã¼ãã¿. There are 9 slices. The slice closest the Ellie is now number 1, the one closest to the door is now number 9. Use kinesis to rearrange the slices like this:

And voila here we go. Get to the control panel and activate the whole thing.

After a strange vision Issac sees that the moon is the source of the marker signal but Danik is here and steals the Codex, that somehow appeared here, from Isaac and tries and fails to kill him again. 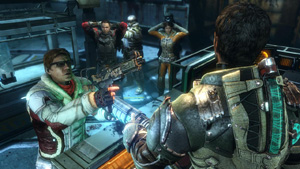 Now run around the assembled Rosetta and avoid the deadly gases. Take the long way around the assembled Rosetta to the door where Carver is waiting already. But hurry up and get out of here. Hammer on your action button once you have to. Sacrifices must be made.
Run along the left side of the gas filled hallway and jump into the elevator.
The 2 cabinets in the hallway are refilled and you can still backtrack a bit and drop 2 scavenger bots at the reappearing Scavenging Points in the Biology section and outside the other door at the sign. Use the Bench if needed. So follow the flares on the ground, open the 4 lockers and get out. Once you are outside you have to get Danik.


Mission Objective: Catch up with Danik

Approach the bridge and be prepared for Unitology Soldiers. The first 2 of them have rocket throwers, so avoid these by strafing and rolling to the sides and shoot where the yellow laser aims are coming from. You might want to get into the dead end in the mountains to drop another scavenging bot at the reactivated Scavenging Point there. The second Soldier is waiting for you around the corner of the bridge with his rocket launcher. Kill him and then proceed towards the crates.
Some more Unitology Soldiers are waiting there for you. After around 6 dead soldiers another one comes in from the top and also some Stalkers join in on the fun and attack you and the soldiers. Get rid of all Stalkers that attack you and then let the Stalkers and Soldiers kill eachother and kill only what is left. There are only 3 Stalkers and 3 Soldier left after the first Stalker appears. Then loot the area for 1 box and some goodies where the Artefact was.
And this is your last chance to start the optional mission Disposal Services. 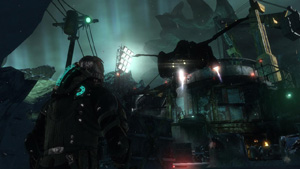 After that take the cargo lift up, drop a Scavenging Bot at the new Scavenging Point at the left wall and find a way under the flying ship into the blown up wall at the end of the field. There are 2 Unitology Soldiers waiting for you around the corner to the left, take them out, then get the 5 boxes.
Enter the door and get the medium MedPack and the Flame Gaze Weapon Part (1/1). There is also 1 box and 1 Ammo Clip to be found. Leave through the door to enter the Silo exteriors. 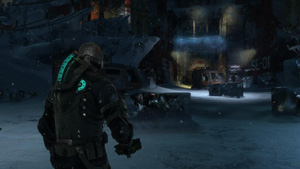 Grab the 3 boxes and kill the 5 enhaced Slashers that appear. There is a Sniper, get somewhere, where he can't shoot you and concentrate on the Slashers. 2 more Unitology Soldiers will come down from the ship but they get engaged with a Slasher most of the time, just see who or what stays alive and kill this. Then get rid of the Sniper and proceed a bit to find a Scavenging Point between the crates and snowmobiles.
Get towards the end of the area to make 3 more soldiers appear at the beginning of the area. They fire at you with rocket launchers again. Be quick on them as 5-6 Twitchers are on their way to you and it is annoying having to deal with these unpredictable and fast Twitchers while you are under fire with rockets. If you can't take them all out hide behind one of the snow mobiles and deal with the Twitchers first and then kill the soldiers. Stasis always helps against Twitchers and you can also stasis the rocket launcher soldiers in the distance. Luring the Twitchers out of the cover from the snowmobile often results in them being hit by a rocket and thus being taken care of, but most of the time the impact of the rocket also hurts you. But it makes the whole fight against the Twitchers faster.

Then play the hacking minigame to unlock the door, enter, grab the 3 boxes and walk on into the next chapter.

A Change of Fortune