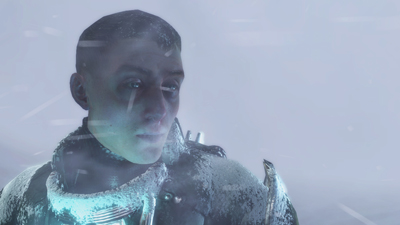 We start with Tim standing in a snowstorm. And he is searching for something but he doesn't know what he is searching for and his supervisor over radio can 't, or rather won't tell him more. So what do we do now?
Ah, there, a mission objective pops up. What is it?

Also a little tutorial message tells us to press B on PC, R3 on PS3 to see a bright line that leads us to our current mission objective. So we are on our first mission in the first chapter already. Just press the marker button to make the message disappear and also find out which direction our mission objective is in.
Follow the path your ingame guiding system tells you to. Once you get out of the snowstorm turn around and get back into the snowstorm and walk along the wall on your right. You will find the S.C.A.F. Artifact (1/1) lying around there, a bit off the track, hidden and glowing in the snow. Pick it up and read what it tells you. Now get back out of the snowstorm again.

The game now teaches you how to run, so run along the ledge and enjoy the view, the game is not going to stay that beautiful for long... 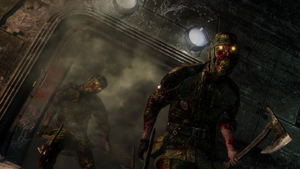 After stomping the 3 Boxes, stacking up on ammunition and finally loading your gun you shoot the black and yellow doorlock and can open the door. Of course some mean Wasters that look still very human attack you. As with every Dead Space game you shoot them by aiming at the limbs to cut them off. This is more effective than a headshot in Dead Space.
After you killed the 2 Wasters you are told to look for a small metal container that will later be known as the Codex, but by now you enter the crashed spaceship though the door you just opened.
Around the first corner yet another Waster with ice picks climbs up, so take good care of it before it can reach you.
The corpse at the end of the corridor around the corner becomes alive, so kill it before it can reach you. Approach it slowly as there is yet another Waster waiting for you at the end of the corridor around the corner to the right. And while you are fighting it, another Waster drops down from some place above. It is getting hectic, but if you back up fast (you remember how to run?) and aim for their limbs they are not that fast anymore. Especially if you cut off their legs first. Once they are all dead and you are done with them climb up the ladder to enter the cockpit.
There are some creepy sounds up here but no more Wasters. Just open the door and enter the cockpit. The Codex is just there. As soon as you pick it up shit is going down. The crashed spaceship loses its grip and starts falling down the cliff. So you jump out and find yourself outside the ship on the iced wall. You have to grapple down from here really fast, so keep your run button pressed and Tim will jump rather than walk down. Avoid the rocks in your way and also try to avoid holes in the mountain wall.

Once you are down the ship comes after you, and to make things worse, its is on fire. What a good start for the day. While the ship is sliding behind you on the snowy slope you should roll to the left to avoid getting hit by the raging ship.

After reaching the Camp some sacrifices must be made...