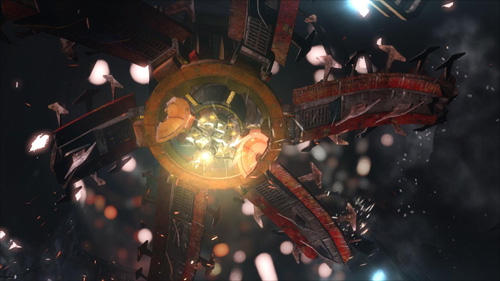 Get in the ring.
Lower the 2 grates on both sides of the drill and get ready to rumble.

If non of the now following hordes of enemies even touches you, you'll earn the Drill Sergeant Achievement. How you best do this can be found here.

First round
The drill moves into the middle of the area, avoid it at all costs as it not only looks dangerous, it is indeed very deadly. Touch the drill only once and it's game over. Also the area is flooded with Wasters now. Run around the drill and hope the Wasters walk into it while following you. Use stasis a lot and refill if possible. If you have some stasispacks in your pockets the game uses these to automatically refill the stasis in your suit, once it gets empty. Refilling your suit's stasismeter at a stasis station is better as it saves you the stasispacks in your inventory for times when you are under heavy attack by necromorphs and have to shoot around with stasis like crazy and can't easily refill your stasis at a stasis station.
And now of course kill all the Wasters as fast as possible. Once you have some space to and time from the Waster attack, stasis the drill core and shoot the yellow fuse in the top middle of the drill until the drill goes away.
Now quickly refill your stasis and collect all the goodies the dead Wasters dropped around here and get ready for the next round.

Second round
The drill is at some ominous 75% capacity and turns and moves through the area a lot faster now (of course, less capacity, faster movement, totally makes sense...) and still some Wasters and even more Slashers come in and want to kill you. Do the same as before. Yeah, that's a lame thing to write in a walkthrough, but you can read the same strategy in the paragraph just above here and there is nothing you do different this time.

Third round
After the drill core retreated again another round will start. This time with a ton of Feeders, but if you are fast enough (and it is very easy to do so) you can avoid this encounter, just stasis the drill as soon as this round starts and shoot the yellow fuse a lot and the Feeders will not even reach you and disappear while the cutscene plays.


After the fight you move on, leave the area, open the 2 Boxes and take the cargo lift up.
There is a good Scavenging Point right after the elevator, so drop one of your scavenging bots here. Behind the boxes on the right end (seen from the elevator) is a S.C.A.F. Artifact (2/2), and there are 5 more boxes around there. Then enter the next door.
Welcome to the Nexus.