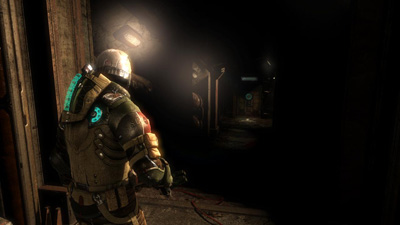 You get the key to the disposal facility on Chapter 14 while searching for the Rosetta Sample in the Geology section. You should better be maxed out on all your stats.
When getting out of the elevator you are in a tram station with a skip nearby, a Suit Kiosk, a Bench and 3 Lockers. Sell some small MedPacks and create medium MedPacks from it, you will need it. Now you should change you questmarker to the optional mission or it will get confusing. Follow the questmarker into the elevator.
Get out and walk down the slope.


Mission Objective: Recover anything that survived the purge

Your new mission objective for the optional Mission pops up. Open the door and run in (otherwise you will have to fight them in the narrow hallway), turn around and get ready to fight 6 enhanced Wasters. This can be really tough, so heal a lot and use stasis a lot. After you hopefully survived grab the Textlog (1/3) and the 3 lockers. Noone will notice if you get back to the Bench now and stock up on MedPacks...
Then enter the opened door and get rid of the 2 Exploders. Enter the next door and take the elevator down.

After leaving the elevator another Exploder comers in, followed by 4 enhanced Wasters and 1 more Exploder. Use the explosives against the Wasters, but only when they are far enough away from you. Climb the ladder and get into the next room, run through and enter the next deadly room.
Let your stasis recover before playing the shortcircuit minigame. If your stasis is filled up again, shortcircuit the panel here to open the door and also call 1 Exploder and 3 enhanced Wasters in. Again use the explosives from the Exploder against the Wasters and stasis a lot.

Now you can continue to the next room, open the 3 wall cabinets, get into the next room, climb down the ladder and get the Upgrade Circuit (1/2). As soon as you turn on the discs a bit the first Exploder and Waster will come in. All in all you have to fight 1 Exploder, 3 Twitchers and 5 enhanced Wasters. This is really intense. Climbing up the ladder after some time will force the Necromorps to come through the only vent on top of the ladder where you can wait for them. Climbing down while there are still Necros down the ladder is no good idea though, you better get back one more room and wait for them to come through the vents. 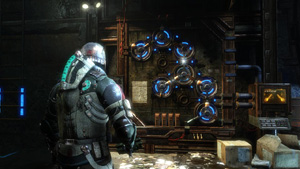 And now to the Fuse Discs puzzle.

That was the easy part. Now get back up the ladder and get over the bridge into the next elevator to the next mean room. This time it's a Feeder swarm of 7 and 1 Twitcher. After climbing down the ladder run towards the door you see and turn around, from there you have a good view on the vent to the right where they all come from.
The next 2 rooms have only 2 Exploders, get rid of them, maybe take one of their explosive loads with you and carry on. Climb up the ladder, pass through two doors and you are under fire again.

Before you fight it off you have to check out the right end of the catwalk on the other side of the bridge. There are no vents near, so this is the place to be soon. Kinesis the bridge down, get to the other side, try to open the door and get ready for the fight.
This time there are 2 enhanced Wasters and around 8-10 Feeders. Just activate the door and run to the spot at the end of the catwalk to be in a relative good position. You can't get out anyways as the door lock down on you. After they are all wasted get through the door.

Oh nice, a Bench to build some MedPacks and Ammo, that is nice. Also, if you don't have one, build a Torque bar. Get the 3 Lockers and then enter the next room if you dare.
Take the cargo lift down and be prepared. As soon as you step off 6 enhanced Wasters will attack you, but there are only 2 of them on screen at a time which makes it a lot easier. Now enter the next door.
There is a Textlog (2/3) around and also the Torque Room.

Don't worry if your inventory is filling up, there is another Bench ahead. The door to the left has nothing but a Scavenging Point. On a new game + you can find an additional Upgrade Circuit here.
Now take the lift up. After the cornered hallway with nothing in it you enter another room with a Bench. You can get rid of the goodies from the Torque room and stock up on other stuff you need. But before you can do this you are attacked by 3 enhanced Wasters. By now they should be no problem. There is another Scavenging Point right in the dead end to the left of the Bench.

Enter the next room. There are 2 lockers, 2 cabinets and 2 ammo clips. Also get the Text log (3/3) and continue to the next room.
This looks like the final room and it is indeed. There is also a S.C.A.F. Artifact (1/1) hidden in the left path here. Get it before calling for the lift. And guess what, as soon as you call the lift another attack starts.
At first around 5 Feeders enter, then 1 Exploder and after some time 4 more Feeders and 1 more Exploder attack. Try to keep the explosives from the Exploders for the next enemies.
The second wave are 2 Twitchers and 3 enhanced Wasters and 2 Exploders. The Explosives come in really handy here.
The third and last wave are 4 Twitchers and 5-6 enhanced Wasters. This is getting annoying, but there are only around 3 of them on screen at a time. Still mean.

So was it worth it? Open the box and grab your Goodies: Good haul.

Watch out for the 3 enhanced Wasters and 1 Twitcher that attack you in the Tram Station. And then it's time to go back to the end of Chapter 14, as this chapter is really long, and you probably just have to get back to Ellie to put Rosetta together, so you can also jump right into the beginning of Chapter 15.
At the upper end of the elevator get back towards the Geology section to find a new Scavenging Point when coming from this optional mission.