Mission Objectives
Decipher the messages in the Admiral's Quarters | 3 Tentacles in the generator room | Regroup with the Crew | Get to the Terra Nova
Collectibles:
2 Artifact
3 Logs
2 Weapon parts
1 Blueprint
2 Upgrade Circuits 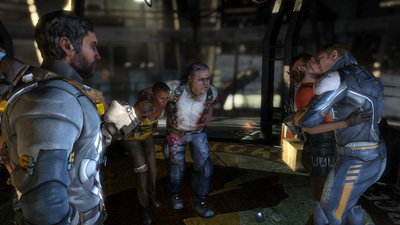 Now that was probably not what Isaac was expecting from meeting Ellie again. She is now together with Norton. But she doesn't want to leave before understanding what the Captain of the Roanoke scribbled onto the walls about the markers. And this is what Isaac will translate now, so we should go there.


Mission Objective: Decipher the messages in the Admiral's Quarters

But before that we scavenge around up here, there is 1 Textlog (1/3), lots of Ammo goodies, 2 Boxes and the Weapon Part Plasmacore (1/2) to be found. And hidden behind these curtains and only reachable with kinesis is another Upgrade Circuit (1/2).
Maybe you want to store some small MedPacks and one ammoclip and even one of the 3 stasis packs in the safe of the Bench now to free up room in your inventory for further upgrades you will find on your way.
Then we can finally take the elevator down again. 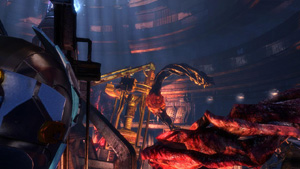 After an argument with Ellie we find out that there is quite some growth in the generator room now. This happend really fast, but we should be fast in getting rid of it now. Just activate the first node right in front of you by grabbing it with kinesis and dragging it down again. Then rotate it like you did before and the electric pulse will shock the growth away. But this make another one of these tentacles appear.
Keep your distance to the tentacles as they enjoy smashing down onto you but have a limited range, so stay out of their range and stasis them to make them slower and easier to hit. Then shoot the yellow glowing blob on them 6-7 times and they are gone. After you get rid of the second tentacle a Slasher appears behind you somewhere, so be prepared.
After the second node yet another Slasher appears, kill him and also get rid of the third tentacle. You might have to wait a bit until your stasis recharges itself or you use one of your many stasis packs to recharge it.
There might be yet another Slasher appearing after you pass the second node and approach the third node. So get rid of it. Once you get closer to the third node another tentacle pops up behind you, so you know what to do, either spend a lot of ammo on it or stasis it and shoot the glowing blob. Then activate the third node to get rid of the third growth.

Then you can leave the generator room and get into the zero gravity area again. Now that we activated the generator the huge fans are rotating and want to slice you up so you better recharge your stasis, then fly towards the fans, slow them down with stasis and then pass through. And don't take too long or the stasis will wear off and you get cut up.

Leave the zero gravity area, climb up the ladder and step out. The item at the back end of the hallway reappeared. And there is a Slasher crashing in through the ventilation, kill it and while doing so get away from the door as another Slasher will drop down right above the door in just a moment. After killing this Slasher too take the elevator. Well, you should take the elevator but before you can enter you have to hack into it with a useless playtime longening hacking minigame.
Just move the two glowing circles there where it is indicated, either with your joypad or mouse and keyboard controls for moving. Then press the shoot button.
You can repeat this as often as you want (or have to...) and there is no failing in that kind of sense.

Finally take the elevator up to the Captain's room and translate the scribbles on the wall. So 200 years ago they found some kind of key to shut down the markers. And this key looks quite like the Codex, doesn't it? So Ellie wants you to meet up back in the main hall.


Mission Objective: Regroup with the Crew 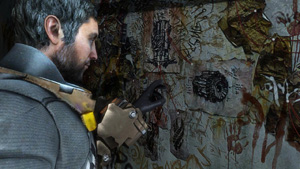 But before we leave here we pick up the Earth Gov Artifact (1/2), the Textlog (2/3), an Ammo Clip and also play the Audiolog (3/3). You can also shoot off the deer head and get some goodies and also a trophy for this.
Now leave with the elevator again and argue with Norton about leaving or not. In the end you need to find a way to the Terra Nova now. But first find a way back to the huge hall with the Bench and the two ladders.
At the end of the elevator the item at the back end of the hallway reappeared again. Get then and then march through the movie room. There are 2 goodies where the S.C.A.F. Artifacts was and you can watch a mission report to find out how Tau Volantis was found and why you are in the orbit of Tau Volantis at the moment. Seems like the markers did receive a signal from there. So this might be the origin of the markers.
Once you leave the movie room you are greeted by a new kind of enemy.


Enemy: Leaper
Leapers only crawl around on ground level and they do this very quick. They have a tail not far from a scorpion's tail and they like to use it and attack you. Your best way to kill them is taking off the front limbs though as they are most of the time facing you.


So there are actually 2 Leapers at once, so you might also want use stasis on one of them or both if you are happy to hit them both with one shot. But don't waste two stasis shots on them as as soon as you got rid of the 2 Leapers 2 Slashers appear and another stasis shot here is really useful.
After defeating them all leave through the door at the end of the hallway. You can now enter the small room on the right to find a Shotgun Blueprint (1/1), an Upgrade Circuit (2/2), 2 Lockers and 1 Ammo Clip.
Now continue to the hall to meet the crew.
Well, there is not much crew besides Ellie, but the rest of the crew found a small ship called Skip (or sometimes SK1P). And this gives you something to do:


Mission Objective: Get to the Terra Nova

Leave through the door next to the bench and upgrade your suit if you can afford it. I recommend at least one upgrade for Air and one for your Lifebar. If you can't afford it but have enough MedPacks you can break the MedPacks apart at the Bench to get the needed goods to upgrade your health. Upgrading the air to 3 has you on the safe side, as we will spend some time outside now and when you have enough air you won't have to worry about finding oxygen tanks. Air on 2 is also okay, 1 is the least you should have.
Also upgrading the armor to 1 is good to have if you can afford it.
If you really want to upgrade some more you can always run back and forth between the rig station and the movie room, as there is a reappearing goodie in the movie room (where the Artifact was) and in the room after the movie room, at the end of the hallway. This takes some time but grants you some free goodies.
Upgrading stasis and kinesis would be nice but is not neccessary and probably not affordable at the moment.
On the shelf opposite the RIG upgrade is another upgrade circuit on a new game +, don't miss it. Now we want to get out into the debris field around the Roanoke. 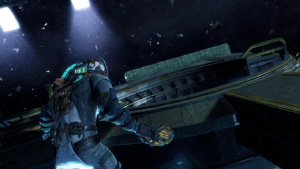 Once you step out of the hatch in the cargo area don't fly straight to the Skip but wait a moment. Look ahead. There is a circular hole in the ground a bit head just like on the image to the right here. Dive into this hole and turn left to find yet another S.C.A.F. Artifact (2/2).

And there is another weapon part hidden outside here, but it is a bit hard to describe and will take a while to find it, but if you want to 100% complete the game, just follow my descriptions, if not just fly to the SK1P by following your objective marker. 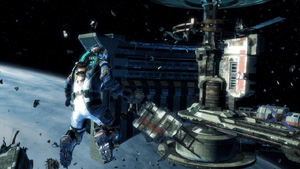 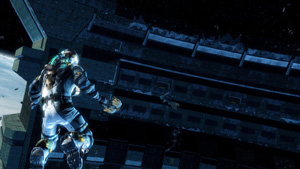 And there are black windows in the building with a bit of yellow, and you can shoot these windows and 3 boxes with goodies appear for each. And inside the black window on the very left there is the Weapon Part Defraction Torus (2/2). While you are close to the opposite wall you are pretty save, but everywhere else out here watch out for the red mines coming at you and shoot them when they get too close. And also a lot of Lurkers are around here shooting at you. After you found all this check your objective marker and follow the line to the Skip.

Enter the SK1P and decide where you want to go. You can either do the optional mission #1 and explore the C.M.S. Greely or continue with the main mission and head for the Terra Nova. Or you could pay a visit to the C.M.S. Brusilov and do a Coop mission.
I recommend doing the C.M.S. Greely mission later, as you get the chance to do it later on and by then you are stronger and this will make it easier. But you should do it some time in any case as there are lots of goodies hidden within the optional mission. So if you decide to do this now please read on under the chapter for the Optional Mission C.M.S. Greely.