Kill or be killed
more games

Chapter 18
Kill or be killed 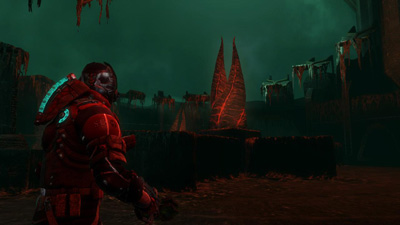 Get the Acid Bath Weapon Part (1/2) and the Electrocution Weapon Part (2/2) right of the door just when the chapter starts. Get up the small ramp on the left but walk to the right. 3 enhanced Wasters attack you on your way, 1 from the front, 1 from the back and after some time another one from the front. Grab their loot and continue. Get the Textlog (1/3) from the table and then kickstart the generator. Now you can use the Bench if you want or need. Grab the box from the crate and then get back where you came from and continue to walk along the path to the end of the room.

There is another box to get here and as soon as you get down from the walkway 4 more enhanced Wasters appear, 2 of them here at the door you are at and 2 at your starting point in this room, so they come at you from the back. One of the front row Wasters is only the upper body while one of the backup Wasters is only the lower body, so this kinda fits. On a new game + you can find a MK-II Electrocution Module here.
Now open the door with the alien symbols written on the ground in front of the door.

As the alien letters are hard to read this pictures hopefully helps. Enter this code and enter the door.
As you walk along the path you can collect 2 Boxes. And just when you approach the next turn in the path a really mean ambush starts. There are around 7 Stalkers stalking up on you and ramming into you from time to time, and in addition to that 6-7 enhanced Wasters come in from the direction of the door you just came from. You can run back to the door as they only come from this direction and actually come from a vent after the door, so you have a good spot to get rid of the enhanced Wasters from the door you just came from and also you are more or less save from the Stalkers when hiding at the door. Once you killed the Wasters take care of the Stalkers that are left.
After that search the area around the red glowing marker for 2 more boxes and an Alien Artifact (1/2). In the middle of the area, right next to the middle marker is a good Scavenging Point. Afterwards another Scavenging Point appears where you entered the heart of the city before this chapter started, but I'll cover this one once we come back, but you can backtrack and drop a Scavenging Bot there and get some more boxes if you want. Especially if you don't want to fight 6 Alien Necromorphs later on to get the Scavenging Point. Then get to the door and enter the following alien symbol code:

The alien letters code is again written in front of the door but hard to read, so this image should work.
Then grab the box next to the door on the outside, walk up the slope and get ready to fly to the northern part of the city and/or machine. Avoid all obstacles by steering and also avoid the Necromorphs by getting out of their way or shooting them.

Enter the labyrinth ahead and get the 2 boxes. Onwards there is a Cyst in your way, as soon as you shoot it an ambush starts. There are 8 Stalkers in the area and 2 Exploders. Get back to where the boxes were and you are in a good position. When the Stalkers hide behind the block right in front of you stasis them when they stick out their heads, get around the block and cut off their limbs. They seem to only attack one at a time. Every now and then an Exploder comes in from where you just came from, so keep that in mind.
After that ambush continue along the way, shoot another Cyst and another hiding Stalker. Then get the box and kickstart the generator to hear an Audio Log (2/3) and at the same time power the cargo lift. Drop a Scavenging Bot on the Scavenging Point in front of the cargo lift. On a new game + there is a MK-II Acid Bath Weapon Part here. Then call and ride up the cargo lift.
Get the Upgrade Circuit (1/1) and the 2 boxes behind the lift and then get ready to solve another kind of puzzle. But first walk to the middle column and then to the left. There is a box and, even more interesting, there is an Alien Artifact (2/2) on the blocked way back to the lift (close to the block blocking the way). Get it. Did you notice the tentacles? Stasis them and shoot them on their yellow glowing weakspot. Then get to one of the glowing pads and enhance your kinesis and stasis this way. With that additional power we can now rotate the 4 pillars around here and this is what we will do. But please keep in mind, when you rotate a pillar a wave of enhanced Wasters and enhanced Slashers and Exploders will come at you. Especially for the second time you turn a pillar. After the second rotation it seems to cool down on ambushes. Just stay calm on your power pad and stasis everything that moves towards you to buy some time. Turn around and watch every direction. Remember, you can also use super kinesis to rip apart the Slashers and use their bodyparts as projectiles. That said, let's solve the puzzle.

The middle pillar has 3 tips, one with 4 bent and twisted tips, one with 2 bent tips and one with 2 blunt and straight tips. To make it easy, just turn the middle pillar two times, so that the tip with the two bent tips is facing north, away from the lift. And then just align all other 3 pillars to that. The northernmost pillar should be in the correct position if you haven't changed anything.
So you just need to turn the last two outer pillars once and we're done here. 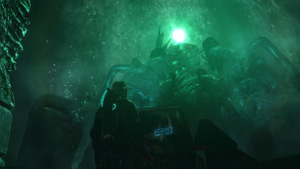 After the machine is aligned another one of these control panels that need the Codex pops up behind the lift. Go there and activate it of course.
Now it is time to backtrack a lot. Fly back to the heart of the city, use the Bench if needed and then continue to the other exit to the place where you came from in the first place. At the place where you first used the glowing power pads to fight against Necromorphs 6 Alien Necromorphs now want to fight you. You can just stasis them and run away from them, but then you maybe miss the Scavenging Point in the corner towards the exit. When you fight them please note there are never more than 2 of them on screen at a time, the last 2 come in seperately. And always keep all visible Alien Necromorphs in stasis!
Then fly back through the city to where you initially came from. You'll run into an Alien Necromorph fighting off 2 Unitology Soldiers, just wait until they are done and then take care of the Alien Necromorph. Some Twitchers will also join in, take care of them while the big one is in stasis.
Use the Bench to restock on everything, grab the 2 boxes here that reappeared and then take the cargo lift up. This time we have to rearrage the glowing balls in the tentacles like this: Move the outer 2 glowing balls to the middle position, and move the middle 2 balls to the upper position. That's it, get to the console that appears and activate it.
Danik calls in, listen to him and wait for the surprise. Take the cargo lift down, kill the 3 Twitchers that all come from the left and while flying up in the ray of blue light again you already find out about the surprise.
As you land and enter the room with the glowing pads around 8 Unitology Soldiers will attack you, in 2 or maybe 3 waves. There are alway some left at the door. 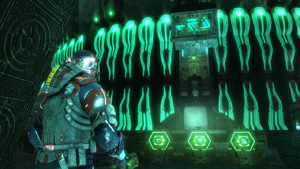 As you enter the door the massive statue moves up in front of you. Use kinesis to grab the power cell from the green glowing box just below the statue and put it into the correct box in front of you. Just compare the symbol on the power cell and the symbol on the statue. It is indeed as easy as that. Now you only have to find the 2 missing power cells. They are at both ends of the room, after using kinesis to throw away the barrier start by going left, you are attacked by 6 Unitology Soldiers there, one of them is even a suicide bomber. Don't forget to turn around and just clear the room, there are 5 more Unitology Soliders hiding at the other end of the room. After they are gone get the power cells, throw them into the middle of the room and place them according to their symbol into the sockets. Now use the Bench to stock up on items and powerful weapons. Then enter the door that just opened, play the Audio Log (3/3), grab the 2 boxes and start climbing up the wall.
Watch out for the flames coming out of the walls, change sides every time you have to, the flames go from left to right and from right to left. Of corse you stasis the rotating obstacles and climb through when you are save from them and the flames.
On top you kinesis the 2 boxes over and then step towards the machine to start a long scene.


Here is nothing to see as there is a thumb+big image missing!
Will be fixed soon...!

Kill or be killed