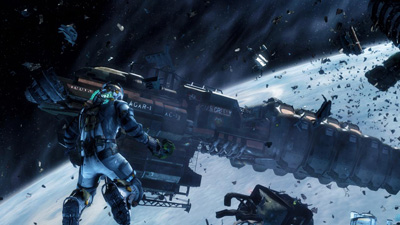 Mission Objective: Recover a port engine for the Crozier

Now is a good time to explore the insides of the C.M.S. Greely if you haven't done this already. This is covered under Optional Mission 1 - explore the C.M.S. Greely. But maybe you don't want to (but be warned, there is no better chance than now remaining) or you looted around there already, then just fly to the other crew member in the debris field.

You can get another S.C.A.F. Artefact and the weapon part Compact Standard Frame around here in the debris field, but as these goodies are counted towards the optional Greely mission the description of the locations can be found in the Optional Mission 1  C.M.S. Greely chapter (see link above). 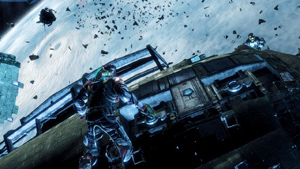 Now let's don't waste anymore time and get the engine. Fly to the other crew member and use kinesis to open up 3 hatches on top of the wreck. Also get rid of the 3 turnable covers below the hatches with kinesis. You probaly get attacked by a Lurker by now, so kill this beast and the second one that appears almost every time right after killing the first one and then use kinesis to move the engine out of the wrecked ship towards the other crew member. 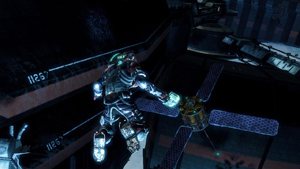 Fly back to the Roanoke but don't enter but fly towards the right side of the cargo bay from the Skip you come with. You now have to fly to the bottom of 3 satellits and grab the navigation module from them. There are 4-5 of these satellits drifting around in the area between the two huge rounded parts of the Roanoke. If you don't know but want to know what these satellits look like, just click on the image to the left here and see one of them in full size. While searching for the S.C.A.F. Flight recorders you will probably get attacked by the mines here so shoot them from far away already before they come to close and explode in your face. If a Lurker shoots at you just fly a bit to the side and it will miss or kill it if you want to waste ammo.
If you didn't collect it already, there are huge black windows on the second round structure of the Roanoke you can shoot and 3 Boxes each will come out of them. Behind the black window on the very left are 3 Boxes and a Defraction Torus Weapon Part (as explained in Chapter 4).

Once you got all 3 flight recorders get back into the cargo bay of the Roanoke. If you didn't grab the S.C.A.F. Artefact floating under the newly docked ship here get it now, this is also explained in chapter 4 already.
Once you are inside head for the Bench and construct the navigation module.
In the room with the Bench are also new goodies, boxes and lockers. 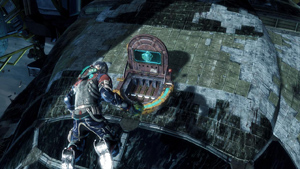 While leaving you should upgrade your Rig on the Suit Kiosk. Your Health should be on level 2 at least, level 3 is even better. Your stasis modul should be able to fire 3 shots by now. Also max out the stasis duration and reload to what else is possible with your item budget.
If you want/need some more items you can even loot around a bit into the Roanoke by entering the door with the quarantaine warning written on it.

After all that get out and fly to the nose of the ship in the docking bay. Open the hatch with kinesis and install the navigational Module. So you now just have to fly to the door of the ship, open the door with kinesis and finally enter.
Inside you kinesis some modules in place, you can watch all the nervous people on board doing nothing and then get on your seat to start you descend towards Tau Volantis. 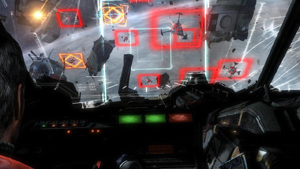 And now it's getting a bit rough. Control the ship and shoot all kinds of trash and mines and whatever is in your way. Once you are told to do something else get back to the modules and kinesis them in again.
As this section even has autosavepoints you could just go and take a long dump and let game do what it does as you restart here and proceed a bit and restart a bit further and so on. Or you aim at everything and shoot everything.
And in the end your ship will crash none the less. Welcome to Tau Volantis.