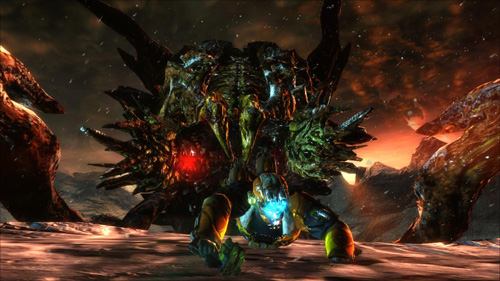 The Nexus has a variety of attacks.
First of all it likes to spit out glowing red blobs that stick to the area around here and you should shoot these as soon as possible. One shot kills them. If you take too long to remove them, these red blobs turn into a Feeder each. And these of course attack you and you have to fight them off while the next attack is also around.
The second attack is the tentacle smash. As long as the Nexus doesn't show its glowing yellow belly it will smash its tentacles all around the area. You can easily outrun these. Just run as long as he wiggles around shortly after spitting out the red blobs. You can also roll to the side when the tentacles are about to smash down. If there are Feeders attacking you while he smashes his tentacles it's gonna be tricky, but his tentacles can also kill Feeders with a hit. He smashes them 2-3 times.

After the tentacle attack the Nexus shows it belly glowing in weakspot yellow, so shoot it with 1015 bullets and then the Nexus starts breathing you in.

While he wants to breath you in you are dragged over the ground. The Nexus shows 4 yellow glowing weakspots around the mouth orifice, shoot them while you are dragged over to them. Concentrate your fire on one of them at a time. The Nexus' mouth blob weakspots don't need as much hits as the belly so you should be able to do it in time before getting sucked in and losing a lot of health. If you get sucked in by the Nexus you indeed lose a lot of health but the Nexus will spit you out again after some time, just because he is such a nice guy or because Isaac tastes so bad.

If you did shoot one of the 4 glowing dots around the mouth enough to get rid of it (or got sucked in and lost some health) the action repeats, kill the red blobs and the Feeders emerging from them, avoid the tentacles and shoot the yellow spot on the belly a lot to kill off more of the yellow mouthblobs until these are all gone. 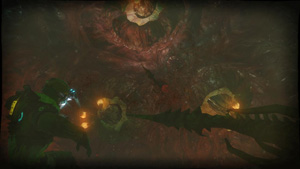 After you shot off the last of the 4 mouth blobs the Nexus will finally inhale you and swallow you down to its guts, its stomach or whatever it is where you are now. Down there you have to face 3 more enemies that don't move but are grown to the wall and have 3 yellow glowing tentacles, so all in all you have to shoot 9 tentacles down here. They move really fast so you will miss a lot, but there are lots of ammo clip floting around in the Nexus stomach. You kinesis them over and you move in here like you are floating in space.
But just glowing seems to be boring for the tentacles, so these tentacles also shoot out living red projectiles that float up before they attack you, so you want to shoot these too before they hit you.


Once you took out all 9 tentacles the Nexus spits you out again (notice how elegantly I avoided saying puke here...) and you argue with Norton. Mash your action button like crazy and you are the lucky one in this ugly situation.
Then follow the path into the next chapter.