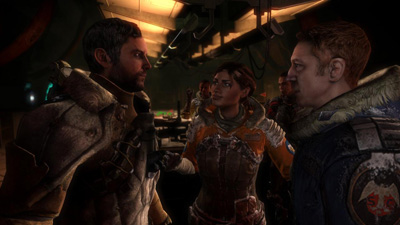 But before doing anything just listen to the Audiolog (1/1) and check out the Torque Room in the corner.

Your choice if you want to spend a Torque Bar and some precious tungsten on it or not. If you want to but don't have a Torque bar handy, there is a Bench close by, just use your marker and set it to bench.
If you didn't drop a scavenger bot at the garage at the end of the last chapter you can still get there now. And there is another Scavenging Point in a corner of the open field in front of the garage, so it's pretty much worth it going back a few steps. 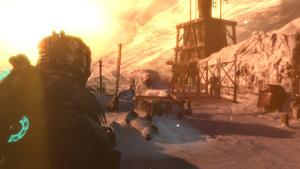 If not, or you don't want to, get the 2 Boxes in the next room and then get outside to the others and get seperated from them again.
After the scene you will face 4-5 Unitology Soldiers. Just get into cover behind one of the concrete blocks and shoot out with them, headshots will do fine for them, no need to cut off their limbs, except when you like it. There are 4 Boxes around the outside area where you just got ambushed, one right beside your starting point, one probably already shot open in the middle of the area, one on top of the metal structure close to the middle here and one at the back left. There is also a nice Scavenging Point out here in the back end. Now get into the open door to enter the bunker.

Stomp the 2 Boxes and get into the next door. Get another 3 Boxes and take the cargo lift down. Down here you are attacked by 5 more Unitology Soldiers and they are attacked by a Puker, so the Puker might as well take some of them out. They don't show up all at once but are rather positioned along the way to the next door. There is a box to the left of the door.
The door leads to a room with a Bench and a Suit Kiosk. You can also find another 2 Boxes and the Directed Suspension Field Weapon Part (2/4). Upgrade your RIG, at this point I recommend having all suit and healt points maxed out or getting as close to it as possible. Also the 2 slots for stasis shots and maybe even full stasis duration.
Then kinesis the crates away to move on. Some more Unitology Solders fight a few Slashers, so let them do what they do. Don't draw a weapon until you are attacked. The light on your weapon attrackts the Slashers and the Soldiers. If you are attacked, fight back of course. Then grab all the goodies they left and grab the 3 Boxes (2 close to the digger and 1 higher on the pipeline crossing). Then the path forks. As we have to go right, check out the left path first of course. There is nothing to be found here except a Scavenging Point. That'll better be worth it. 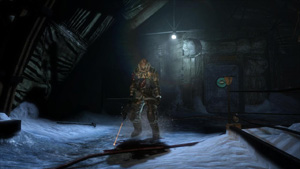 Now take the right path into the tunnel. There is one more Unitology Soldier coming along, after him you find 2 Boxes and an Alien Artifact (1/2) to the right of the door.
When entering the door a Slasher drops down on you, so kill it. It seems the Slasher likes to block the door so it's a bit hard to get a good position and a good aim, but if you use stasis and empty enough shells on the Slasher it will work out. Grab the box and climb down the ladder. There is a Hammond's Heavy Frame Weaponpart (3/4) hidden behind the ladder, kinesis it towards your thankful hands and continue though the next door.
On the outside there are 6 more Unitology Soldiers that want to be shot by you. Or maybe they want to shoot you, so shoot them first. Then get the two boxes to the right of the area and carry on. There are 2 Boxes to the right and one to the left of the door. Get them, they have some good stuff. Then exit this area or get into the cooperative mission you can access here. You can of course come back here later and do it.
The next room has 3 corpses that cannot be thrown around with kinesis which is always a sign for the following: There are Headinfectors coming in. This time they are a new breed, they are bigger and gain control of the corpses and also use the weapons of the Unitology Soldiers they possess against you. But the same tactic applies, some good aimed headshots are taking care of them in no time, just stay calm and aim good. There is also a MK-II Overclocked Heavy Frame on a new game + here. 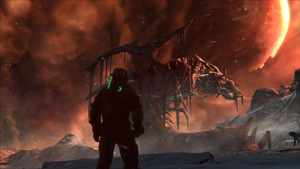 Outside you see some Unitology Soldiers being attacked by 2 Wasters. Let them do their stuff until they realise you are present and attack you, so fight back. Once they are all down more head infectors of the bigger breed come in and do their part in bringing them back to life and attacking you again with their weapons. Stay away from the shootout far enough and aim good and you will be fine. There are 4 Boxes around here and another catwalk to the left, but we can't get in there now as we need a keycard. When getting close to the hacking node next to the door another Waster might appear, so make sure everything is dead around here, then do the hacking minigame and enter the cave.

We are now in the Coring Platform. Grab the Upgrade Circuit (1/1) from the cabinet at the wall right next to the door, then get in deeper. There is a Bench and you find the Telemetry Spike Weapon Part (4/4) close to it. As the Bench won't work without power you should kickstart the generator and then use it.

And now it is getting interesting. You will also earn the trophy Drill Seargeant in case you survive the upcomming battle unharmed.