On the Roanoke
more games

Chapter 3
On the Roanoke 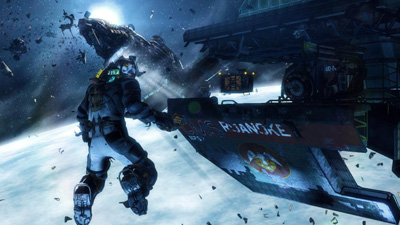 Once we are inside we don't have time to relax as the first mission objective in here already pops up.


Mission Objective: Open the cargo door for the crew module

But this is on the easy side, just enter the next door, grab the 2 Ammo Clips here and don't forget the Heavy Standard Frame Weapon Part (1/2). Then enter the only possible next door to enter the control room for the hatch. Use Kinesis to turn the lever to open the cargo door. Isn't it interesting that they still use heavy levers and no touchscreens in the year 2514 and the lever has no physical impact on the cargo door though.
The crew of the Eudora is hurt, so get out of the control room and enter the cargo bay to meet them.

Norton gives you the coordinates he thinks Ellie is at inside the C.M.S. Roanoke. He sends you in to all the Necromorphs while he welds the small and already broken cargo container, that sounds fair.
Grab the Tesla Core Weapon Part (2/2) in front of the door, then walk around the back of the room to find a ladder leading to 2 Boxes that want to be stomped.
After that climb down and enter the new door leading you through a hallway with nothing of interest into a huge room with lots of things of interest. In here is the first special wall cabinet with an Upgrade Ciruit (1/2) in it, 2 Lockers, 1 other wall Cabinet, 2 ladders, with the right one (when entering) leading to 2 Boxes while the left one leads to nothing. But on a new game + there is an additional Upgrade Circuit on the left.
After you looted enough you should grab the energy cell around here with kinesis and stick it into the hole next to the bench. This needs some fiddeling, just use kinesis, let go and kinesis again when you have it halfway in, after some time the game accepts that you have it in.
This powers up the bench and you can finally enter the bench and fullfill your first optional Mission:

Enter the Bench and just do what the game tells you to do and you will have a new weapon in no time and know how to create you own weapons. This mission was easy, wasn't it?
Just a note, that took me some time to find out, you can use more upgrade circuits on one weapon by unlocking more slots by spending goodies on it. I somehow waited until the game unlocks them for me and it never did so I missed upgrading a lot... 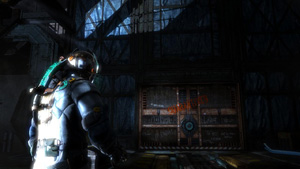 Well, now continue your path through the huge dark orange metal door with the nice word Quarantaine written on it. Must be nice behind this door, let's go.
After 2 more doors you are greeted by 3 Slashers in the hallway, and as you know already, shoot off their limbs to kill them. They are nice and attack one after the other, so if you handle them fast enough you can handle them one after the other and don't have to fight off multiple Slashers at once. Don't forget to stomp them to get some goodies, then open the cabinet for more goodies. Use kinesis on the boxes in front of the door to get them out of the way and then enter this door.
Inside the movie room you'll find 2 Lockers and 1 Cabinet, then, before walking up the slope look up the slope and then look at the ceiling at the end. There are 2 Slashers hanging on the ceiling, you can wake them up by shooting them and taking them out one after the other. You cannot sneak past them as they will attack you from both side when you are between them which is not that good. After you killed them both a third Slasher will appear from the end of the walkway, so kill it too.
Before leaving the movie room there is another cabinet and a S.C.A.F. Artifact (1/1) to be found. Get it and then leave.

Outside something disappears to the top but doesn't attack you. But be warned, there are 3 Slashers hanging from the ceiling in here. And they will attack you, no matter what, so wake them up and shoot off their limbs one after the other. If needed use statis to slow one of them down.
Then check the 2 Cabinets in the first part of the hallway. Get deeper into the hallway and find another special cabinet with an Upgrade Circuit (2/2), a Textlog (1/2) and another box. The Slasher in front of the box will stay dead, but as soon as you pick up the textlog or stomp the box a slasher appears from behind where he wasn't hanging before. But he is alone now and you should handle him without further problems. 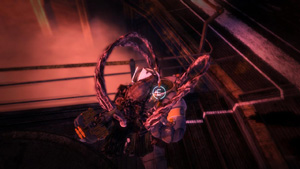 As there is nothing more you can do in here leave though the only door possible and climb down the ladder. While doing so the rest of the Eudora crew will contact you and complain that they are attacked. But you are very far away and enter the next room, the zero gravity room!
Jump into the zero g state and fly along. There are 2 Boxes to be collected along the way. But also 3 Lurkers appear.


Enemy: Lurker
Always when you need them the least these small but fast and agile beast appear. They can stick to surfaces in zero gravity and walk up walls in normal gravity. Once they found a place to have you in view they spread out their 3 tentacles and prepare to shoot you from them. You have to shoot off 2/3 of their tentacles and they are gone for good. Later in the game you have to shoot off all 3 tentacles to get rid of a Lurker. It is best to use a weapon with a broad ray for this, for example Isaacs special line gun. After the Lurker fired at you it likes to detatch the tentacles and jump around all over the place to find another attacking position.
And to annoy you even more they seldomly appear alone. So get rid of them as fast as possible.


Now you know what the Lurkers are and what they do, so shoot off their tentacles and make your way to the door at the other end of the zero g part. It seems that these first encounter Lurkers need all their tentacles taken off. But in zero gravity it is easy to dodge their shots. Also kinesis their corpses towards you and throw them away again to get some goodies instead of stomping them.
Enter the door at the end of the tube, grab the ammo clip and the Textlog (2/2) and climb up the ladder. Here you loot the cabinet and enter through another door into the generator room. 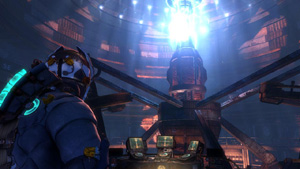 So Norton has problems and needs power. No problem, we are in the generator room already. So let's power this machine up.

Use kinesis on the movable part of the node and pull it down. Then rotate the valve wheel above with kinesis until you see sparks flying. Repeat this action 3 times and we are set.
Note that there are 2 small MedPacks hidden in an alcove close to the by now defunct elevator.
But of course you will get attacked, there are 2 Slashers and 1 Lurker or 3 Wasters appearing as soon as you power up the first Node and they prefer to come out of the vents right behind you, so you should run around the walkway a bit before turning around and killing them.
After the second node is connected nothing happens, but after the third node is powered up 2 more Wasters attack you. Luckily they appear farther away and can be shot from afar and delayed even further with stasis.
After the 3 nodes are connected you have to get to the control panel and activate the generator. Once you do this Norton invites you to join him and the crew at the top of the ship and also 2 Lurkers invite themselfs to eat you. Fight them off and then take the elevator up to meet the crew.