Reach for the Sky
more games

Chapter 13
Reach for the Sky 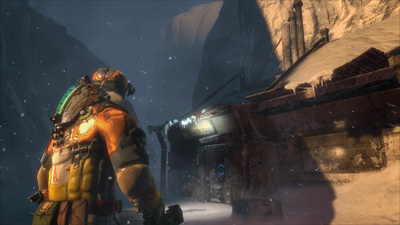 And here we are next to Nortons corpse. Maybe Ellie will like it if we bring his head to her? But there are other trophies in the game that have a saner way to earn...
So walk along the path and grab the Hun-E1 Badger Blueprint (1/1) next to the hut. Inside the hut you can find a Bench that you can use to stock up on items after you kickstarted the generator. Also there is an Upgrade Circuit (1/1) inside the wall cabinet. At the sign outside the hut is also a good Scavenging Spot. 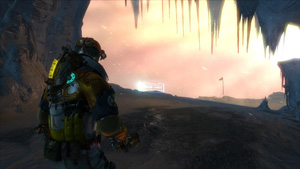 Now walk further along the path to team up with the others. After telling Ellie what happened she reacts cooler than Santos. But we need to grab the 2 Boxes and then grapple up the wall.
The ingame tutorial explains quite well how to climb up that wall, so look out for rocks that might fall down, everything that looks like it might come down will come down. So jump to the sides when a rock is really coming close. There are 2 walls to climb, then you can walk along the mountainside on a very long path with nothing of interest but a conversation with Ellie. Shit happens on Tau Volantis. Use kinesis way too long to unfold this little ladder and climb it up.
There is 1 Box just ahead and 2 Boxes inside the tent on the right. Walk along the path and pick up the Compact Standard Frame Weapon Part (1/4) and the 1 Box. Further down the path there is a Waster hacking on something (probably corpses) and as soon as you attack this Waster even more Wasters and Slashers come in. Some of them are in a darker color and take more hits, these are enhanced Wasters and Slashers. And they all attack you at the same time, so stasis is very helpful here. All in all there are around 5 Slashers and 5 Wasters attacking you. I had good aim when running past the one hacking Waster into the next deadend cave past the Waster and then shooting the Slasher spawning there and turning around, stasising the Necromorphs a lot and then just shooting and slashing my way through there, as there is no other strategy than shooting them all as fast as possible and using stasis to avoid letting them get too close to you as they all appear at the same time.
In this deadend part of the cave you can find another box and the Weller's Compact Frame Weapon Part (2/4). When going on take the way to the right (or use your questmarker if you are lost), there might be another Slasher jumping in your view, but it is a normal Snowslasher, not the stronger and darker enhanced version. Then continue along the path until you reach the cage blocking your way. Use kinesis on the cog above the cage to throw it down to the rest of the crew. While they are attacked you can do nothing but continue, grab the 3 Boxes and go on until you meet 2 Leapers. They are visible from afar and if you backtrack a bit they come at you one after the other. Then when you take some more steps forwards 1 Waster and 1 Slasher will appear in front of you and also 1 Slasher and 1 Waster behind you. This is getting even more trickier as 2 more Leapers will appear once you killed some of the Slashers and Wasters and still some are on screen. So get past the frozen waterfall that looks like one huge icicle and enter the next cave with 2 boxes and the Ammo Support Weapon Part (3/4).

Another wall you have to climb is on your todo list now.
As soon as you start climbing rocks start falling down on you and you are attacked by 2 Lurkers. Get rid of the Lurkers and then climb on avoiding the rocks of course. There are more Lurkers appearing. Once there is a hole in your way you have to jump over to the other side and climb on there.


On top of this climb just walk along the path and chat with Ellie some more until you come to a fork in the path. As the questmarker wants us to go right we get the 3 Boxes on the left first, drop a scavenger bot at the Scavenging Point in there, then continue the normal way. After a longer way there is an Exploder around the corner. And he doesn't stay lonely long, as 3 more Exploders and 2-3 enhanced Slashers join in on the fun. You could use the explosives from the Exploders but don't do it when the enemies are really close as you will also hurt yourself this way. Now continue along the path until you reach another fork. Get into the left deadend first to find a S.C.A.F. Artifact (1/1) and the third Scavenger Bot. Great find! The other path finally leads out of the cave. On a new game + there is an additional Upgrade Circuit on your way out.

Take the right path on the outside first to find a Bench, 3 Boxes and the Ripcore Weapon Part (4/4). There is nothing more of interest, so go on to find the next climbable wall with 3 Boxes around the area of the grappeling hooks. Get out your rappeling gear, we are going up even more. Start climbing on the right side. 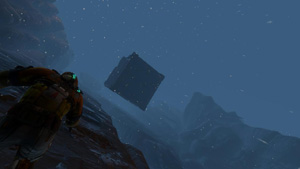 On the top of the wall is a Scavenging Point, right where you climb up, drop a scavenging bot there, then follow the path.
2 Slashers, 1 Leaper and 3 Pukers attack you as soon as you reach the corner in the path. It is ugly. But then grab the box around the corner, kinesis the ladder to functionality and climb it.
Stomp the box right after the ladder. Then kickstart the generator for the winch.
After Santos tells you that you have to create your own Codex from Rosetta now walk up the hill to the fusebox behind the mast to play around with the fuses to bring the group back together. 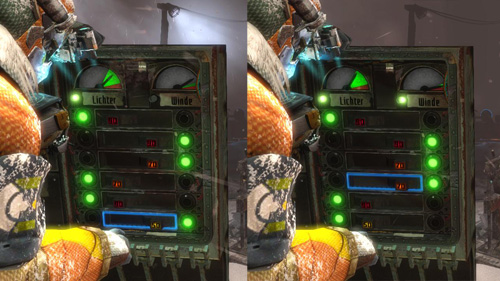 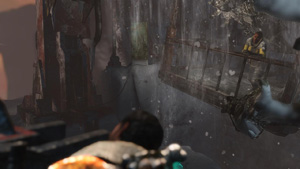 This redirects the power from the lights to the winch. You just have to activate the winch manually now. As always, kinesis comes in handy here.

A cutscene plays where your small group is getting even smaller thanks to the Snow Spider. Let's kill this beast now, shall we!

Of course the game wants us to do some romatic stuff with Ellie (who wouldn't want to do this right now), so follow the path again.

Reach for the Sky