Mission Objectives
Escape the Lunar Colony | Rendezvous with Norton | Cross the Street with automatic traffic | Assemble and board the train
Collectibles:
2 Artifacts
2 Logs


After Carver and Norton convinced you to rescue Ellie everything is back to normal...

So we have to get out of here. But first grab the MedPack on your desk and listen to your answering machine for an Audiolog (1/2). On your bed is a Textlog (2/2). 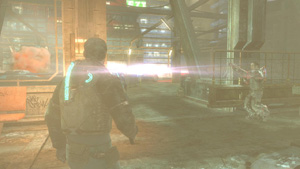 Once you exit your appartement take the short way to the right for a small MedPack. Then get down the hallway to the other end around the corner, down the stairs and through the door to the outside of the building.
Meet up with your new friends and after getting some small insight run for the car. Of course one of the Unitology lunatics blows up your car and you find yourself in the sewers.

There are some ammo clips to be found and 4 Unitology Soldiers come at you. For the human soldiers headshots are very effective.
After the group of 4 one single suicide bomber comes running at you, so shoot him before he reaches you. Then climb up the ladder at the end of the sewer tunnel. Up here Norton calls you and tells you to meet up with an extraction team.

Stomp open the 2 Boxes and open the 2 Cabinets to grab the goodies inside before you continue through the door. Once you enter the next door you are on the outside again. The Bench and the Suit Kiosk around here are broken and won't work, so go on. 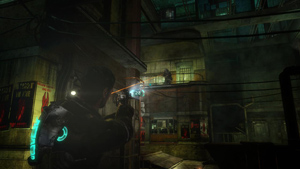 Around the first corner, where the civilian gets shot, 2 Unitology Soldiers await you, one on ground level and one on the balcony on the 2nd floor. Kill them and follow your path. Around the next corner another Soldier tries to kill you but he is standing there unguarded and is easy to kill.
Now how do you cross the road with automatic traffic passing by in this enormous speed. Well, this is a little tutorial for the use of stasis, so shoot the traffic with stasis to slow it down and by that you cause a little accident. And by that I mean a huge accident. But finally you can cross the road. But don't climb up the ladder on the other side of the road yet, as there is an Earthgov Artifact (1/2) hidden around the corner on the side of the road where you just came from.
After you got that, climb up the ladder and you can exit without caring too much about the Unitology Soldiers that now come after you as they seem to be too stupid to climb the ladder. Or at least they are very slow.
You can run over the bridge towards the direction you just came from for another box and 2 wall cabinets with goodies before entering the door that leads you on. Through the neon hallway you enter the Dredger Lobby 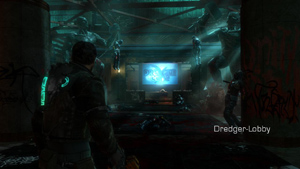 Just imagine what happened here!
Well, or better not, so proceed to the back wall and grab all the goodies from the 4 Cabinets on the wall, then enter the elevator and drive it up to meet Danik.
He takes care of the extraction team you wanted to meet and frees a marker right in the colony and then wants to kill you for the first time but he fails.

You drop down some storeys and wake up on a pile of corpses while 2 Wasters knock on the glass walls. Grab the 2 MedPacks in here, heal Isaac and get ready to fight the two Wasters. Go for the limbs and don't forget to stomp on them.


Enemy: Waster
These ugly guys seem like humans and usually carry some sharp object with them to stab you, so don't let them get too close. But also when you shoot off their upper body they grow tentacles out of where their body should have been and shoot you with some ugly stuff from there. In this case getting rid of the tentacles is your best strategy. They drop dead after cutting of their tentacles.


Check the 2 Cabinets on the wall next to the door, then enter the door and stomp the corpses in here for some goodies. Then enter the next big room. There are 4 Cabinets in the sideroom to the left, but as soon as you grab the goodies from the last of the 4 Cabinets the Waster on the ground here will come alive, so get rid of it.
Farther into the room are 3 more Wasters on the ground playing dead. Shoot them to wake them up before you get too close and they stand up next to you. So you should have enough time and room to deal with them. There are 2 Cabinets in the two rooms at the end of this huge room. After looting them take the elevator down.

As soon as you get out of the elevator you will find the Unitology Artifact (2/2) behind the counter and 2 Boxes on the ground. There is yet another broken Bench in the shoppingarea here, but on the opposite side, inside the softdrink shop is an ammoclip on the shelf.
Now proceed through the shop on the right end of the subwaystation. Inside the shop you can find 2 small MedPacks and 2 Ammo Clips.


Enemy: Slasher
Soon you will meet another enemy form, the Slasher. These bastards are very quick so shoot off their legs. But also they have grown their arms into spikey extremities and reach for you with them, so these should also be taken off from them. You should just get rid of them as fast as possible. And now face a bunch of them.


Back on the streets there is yet another small MedPack on the left but as soon as you proceed to the right 2 Wasters and 3 Slashers climb over the fence in the distance and come at you. And you should get used to it, there is also another Slasher appearing behind you, but you have quite some time to take care of the beasts in the distance before he is close to you and you can still stasis the Slasher behind you.
Be prepared, around the corner of the entrance to the subway you want to enter now another Waster crawls on the floor, but this one is easy to deal with.
When you get deeper into the subway station 2 more Slashers are hanging around there and you can ignore them and pass by or kill them. Whatever you do, get into the next elevator now to finally reach the subway.


Mission Objective: Assemble and board the train 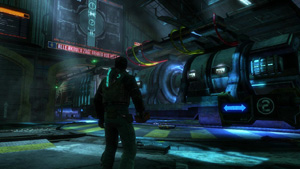 After you enter (or exit?) the train through the door you have to shoot 2 Unitology Soldiers on the train, headshots work well here. Climb up and when looking down to the next section of the train you'll see the next soldier you might want to get rid of now.
After him you climb up once more on the fuel traincar and are greeted by an explosion, 2 more soldiers and the Eudora. Kill the soldiers and make your way to the hatch of the Eudora. Once you jump over mash your action button to really get on board. Phew!