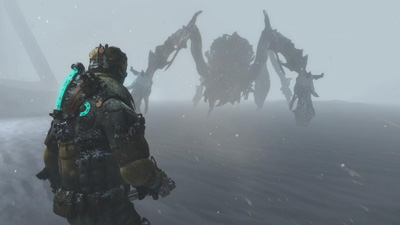 The Snow Spider, sometimes also called Snowbeast, is a rather easy miniboss. While the snowspider is in the distance it will spawn 3 tentacles from its back, each glowing in suspicious weakspot yellow. So shoot all three tentacles really quick so that they fall off. Once you took all the back tentacles away the snowbeast will grow 3 more glowing blobs out of its mouth. Stasis the beast and then shoot one of the glowing things in its mouth.
After you took away one of the mouthweakspots the whole procedure will repeat. After you took away 2 mouthtentacleblobs the beast will just run away.

While the back tentacles are out the snowspider will try to ram into you and throw you to the ground. Strafe away running to the sides from this attack, if you can't make it fast enough roll away. The best thing to do is to just take out all 3 backtentacles as fast as possible so that the snowspider won't even think about ramming into you and rather grows the mouth tentacles.
While the mouth tentacles are active it will also ram into you, but you can stasis it while the mouthtentacles are growing and then have a good aim at a slower target. Once one of the mouthtentacles is hit it will stop every movement towards you and rather regrow the backtentacles so you are fine. You can also stasis it while the backtentacles are your aim, but this is a waste of stasis, but if it helps you please do so.

And because somewhere on the internet there is always someone recording and publishing a video where he plays a lot better than you, at the moment the place for this is youtube, so here is a video showing a fast slaughter of the snowspider... 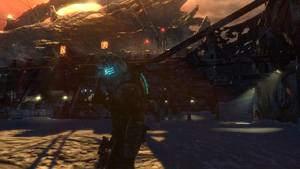 Inside the building, behind the second door, there is a Heavy Standard Frame Weapon Part (5/5) on the right and a ladder leading up to the Pulse Rifle Blueprint (2/2), a Textlog (4/5) and a S.C.A.F. Artifact (2/2). Behind the Artifact in the darkness above your head also hides another Box. Now climb down again and continue through the open door and take the cargo lift down.
Exit the lift and walk straight on until you find a box on top of the snowmobile. Behind it is a door you can open by playing the short circuit minigame. Inside there is the last Textlog (5/5) for this chapter. The door to the right brings you to a Waster without any legs, so kill it before you are overrun by the swarm of around 11 Feeders. After you killed them all grab the Upgrade Circuit (2/2) from the wall cabinet next to the door, open the 3 Lockers, stomp the 3 Boxes. Also drop a Scavenger bot on the Scavenging Point in here.

Now get out and follow your questmarker through some doors until you find the rest of the crash survivers to end the chapter.