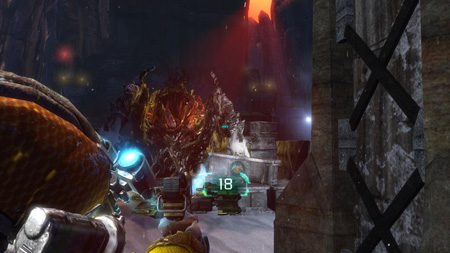 And here in the staging area we face the Snow Spider again. You do the same against it like on the last encounter. Just wait until the 3 backtentacles pop out, shoot them off, then, when the 3 mouth tentacles show use stasis on the spider and shoot the glowing mouth tentacles. Don't get cornered in the staging area, otherwise you might get rammed and locked in. Other than that, this fight is way too easy again. This time you have to actually shoot all 3 mouthtentacles but the spider still manages to escape from Isaac. Could it be possible this means we have to face the Snow Spider again in the future? Who knows...

And after the fight Isaac recognises the flares on the ground of the Staging Area leading to a door and there we are provided with another optional mission which I recommend doing now if you ever want to do it. The optional mission is called Protect the Armory Munition Cache. It is actually a very good sidemission, the atmosphere is really tense and creepy and it is also very action packed, so do it now, also for the goodies.
After this optional mission you can also do the optional Supply Depot mission, in case you didn't clear it back in chapter 9.

Even if you don't want to do the optional Amory Mission now there is a Bench on the way to the amory you should use now to build the Probe gun and then get back to the Nexus. But before that grab the Unitology Artifact (2/2) in here and then get back to the Nexus. There will be an ambush with Wasters and Slashers and Head Infectors at the drill site. After the drill site there is a Puker popping up out of the snow and some Head Infectors go berserk on the corpses here, take them out before they infect them again and again. Check out the Scavenging Point here, then get into the Nexus and take the elevator up and you will enter the next chapter.