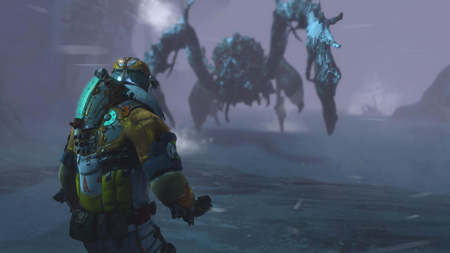 This time fighting the Snow Spider is unlike the other 2 encounters that included a fight. The first thing to do is to stasis the Spider to have time to kill off some of the Slashers roaming around the area on this mountain cliff.
While killing some of the Slashers find your way to the back end of the area. There is a generator that you have to kickstart now. Make sure the Snow Spider is in stasis while doing so. 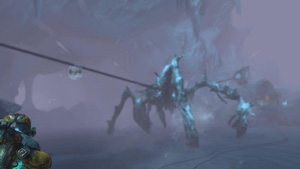 Once the generator is on just run into the cave between the 2 harpoons and hope the snow spider follows you. Get into the middle and make the spider also get into the middle between the harpoons. The laser is on autoaim, so once the snow spider is between the harpoons they fire and catch the spider. Now run to the other harpoon (the one where no generator is, but the torque controlled kinesis winch) and use kinesis on the torque controlled kinesis winch to reel in the harpoons (repeatedly mash your action button) and tear the Snow Spider apart. Finally. It also helps a bit when you stasis the snowbeast while playing around with the torque control.
This is the last we see of the Snow Spider. What lucky we are and what great gamedesign it is, that it attacks us right there, where there are 2 lasersupported harpoons.

The Snow Spider drops a S.C.A.F. Parts Box, get it, and also get all the Boxes and other goodies around the area before you climb up the last boring wall in the Reach for the Sky Chapter.