What lies Below
more games

Chapter 16
What lies Below 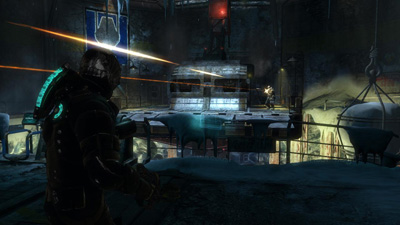 And it is time for another rappeling action. But before jumping down get the 5 boxes around here. There is an additional box on the ledge over the hole, use kinesis to get it. Then use the Bench if you want and finally get down the hole. 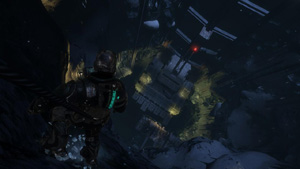 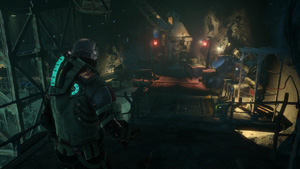 Get out of the elevator and kill up to 3 Unitology Soldiers on the huge elevator platform in the middle. Grab the 1 box and get down the slope for another 4 boxes. There is a S.C.A.F. Frame Weapon Part (1/4) on the frozen cargo container.
Then get down even more.
As soon as you move downwards a bit you are greeted by 2 Unitology Soldiers, the one on the left is even armed with a rocket launcher. But you can just shoot the exploding barrels next to them to get rid of them.
Just when you can see the next 2 there is a small MedPack on the wall to your right, kinesis it to you. Then just shoot the explosives next to the soldiers and use kinesis again to get the Rail Accelerator Weapon Part (2/4) from the right side of where the 2 soldiers were just standing.
After this there are 2 Ammo Clips on a wooden platform to the left and then there is the middle elevator stopping. Another rocket launcher awaits you, get down from the wall so that you can aim better and aim for the guy with the rocket launcher first, then kill the other 2 Unitology Soldiers.
You can kinesis one box from the very left of the catwalk on the other side over and there is another box close to the door we will enter now. You might be interested in using kinesis to get the corpses of the soldiers on the other side of the elevator hole and then throw them into the hole because there are Head Infectors ahead. 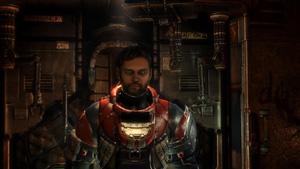 Inside the door we find yet another box and the Safety Guard Weapon Part (3/4). Now play the useless hacking game to enter the next door. In here is another Bench, 3 more boxes, an Audiolog (1/1) and an Upgrade Circuit (1/1). But the best thing to get here is the new suit. Use the Suit Kiosk and put on the Elite Suit.

Then leave and kill the 3 Head Infectors and every corpse they might infect, loot all the corpses and get ready to rappel down some more and encounter a new enemy.

Enemy: Crawler
Crawlers are infected babies that come running at you and when they touch you they just explode. Now they have a plan in life. They die from a single shot and deal quite some damage when they explode close to you. 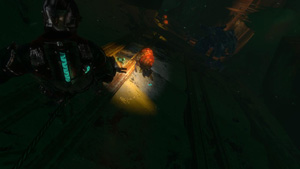 And exactly these guys are what we meet now. You can see some of them from above on a platform and once you get down to about the level of the platform 7-8 Crawlers pop up and attack you. Shoot them and continue your descent.
You will meet some more Crawlers on your way down and then there are 2 holes in the wall where you have to jump over. But pause a moment and kill the Unitology Soldiers first. Then continue downwards and deeper into the abyss. Soon another new enemy will jump in, this time a bit bigger than the Crawlers.


And exactly this Alien Necromorph is entering the elevator platform now, killing some Unitology Soldiers and climbin up the wall towards you. Like already mentioned, use a lot of stasis and concentrate your fire on one limb at a time. On the first encounter you only have to cut off one limb and the Alien Necromorph will fall down into the depths of the pit you are looking into.
And now climb down some more and meet the Alien Necromorph again and watch it kill some Unitology Soldiers. They don't have a chance, after they are gone kill everything in sight, especially the Alien Necromorph. Stasis it to make it spawn less Crawlers and shoot it all the time. Also kill the Crawlers that manage to come towards you. Then finally get down from the rope onto the platform. Get the 3 boxes, the Heavy Standard Frame Weapon Part (4/4) and the Javelin Gun Blueprint (1/1). Drop a Scavenger Bot on the Scavenging Spot to the right of the door and then get through the door.

Some more rappeling is now your goal. Get down on it.
Get ready for another Alien Necromorph action. All in all an Alien Necromorph appears two more times.
The first time it appears there are no Crawlers involved. Backtracking up the wall gives you a bit more time, stasis it a lot and shoot like crazy. Also waiting for your stasis to refill to give you, well, more stasis.
After defeating the first Alien Necromorph there is an additional ammo clip to be found on a ledge on the other side, then climb down, but take your time to let your stasis refresh.
Some Crawlers will appear, kill them. After them yet another Ammo Clip is found on the other side.
Soon one more Ammo Clip, more Crawlers and the final encounter with an Alien Necromorph happens. This time it is easier, at least it felt so for me. Stasis it and shoot it, and when the Crawlers come too close shoot these, then continue to fire on the Alien Necromorph. Once it falls down into the black hole follow it. 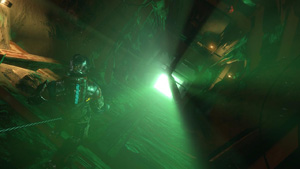 You reach a huge fan soon, with some more goodies hidden on the sides of the path. Another Alien Necromorph will come running at you from below the elevator but can't get above it. Poor evil bastard. And now we want to get below the fan too where the Necro just was. So just stasis the fan and jump through. Then of course mash the buttons you are prompted to mash and this chapter is finished.