Escape from the hotel
more games

Escape from the hotel 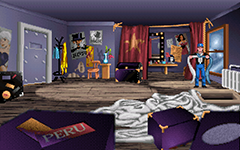 Downstairs in the Hotel

Here you need the comedy breasts out of that huge cupboard. To get them, just move the ladder.
Once you moved the ladder, you can take the breasts with you.
Now to the important part. Take a crowbar with you. The crowbars are on top of the cupboard.
Now walk up the stairs to get one floor higher.

Don't let the two strange looking guys see you.
Try to take the key. Ask the bellboy about the key and tell him you want it.
Ask him again and say you are a friend of Lola.
Pick up the key.

Now get back up to the room you were locked in.
Use the crowbar to open the chest and look at the chest. You receive a towel for this.

After you are armed with your deadly towel go down one floor and enter the red door in the basement. Of course you unlock it with the key before you enter. 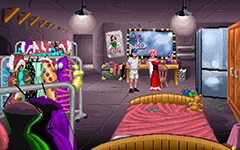 Ask Lola for help.
Get back to Lola and give her the Towel.
So, now we have a pretty devent disguise? Use the dress and get out of here! 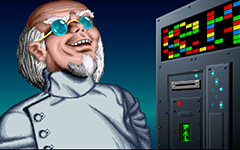 The crazy Doctor transforms an amazonian woman into a dinolady.
He wants to gain power over the whole world with his dinoray.
And now we know the villain of this story already!

So finally it is time to get out of the hotel and drive to the airport. Sneak past the two dumb guys to reach Sparky's truck
Damned! Followed!

Change clothes and look under the hay. Pick up the oil and use it on Rico. Now to the airport. 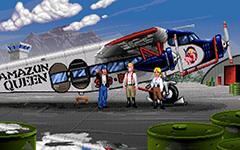 Beat up the dutchman and get in the plane.

Escape from the hotel