Inside the Temple
more games 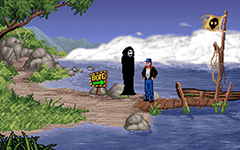 The jetty is this place with the ferry where you couldn't do anything useful at all. Until now.

Introduce yourself as Joe King and ask the ferryman why he's so upset.
Ask him if he already caught some. Let him tell you about the one that escaped. Ask the ferryman if he's fishing. Then ask him what kind of BAIT he uses. Give the bug to the stupid Charon as a bait.

So, and now ask him if he's willing to ship you over.

Enter the Temple! What else!

Go into the left entrance and do something with the mummys. They crumble and so you take with you what's left.
Go to the left again and do the same to the mummies as you did in the room before.
You see that little dinorat? Feed it some Cheeze Bitz.
Now go left once again.

You are back in the room you started from.
Put the bones in the holes where they should be and then use the one arm in the strangely shaped thing on the left side of the screen. Drop a coin into the slot of the strange machine. So, guess what now, use the armbone!

In front of the statue 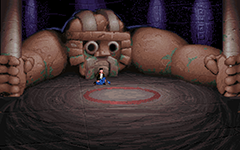 Talk to the Hologirl and tell her, that you know (you know it, don't you) that her riddle is about the human kind.
So you're right, so what? You can get past her and enter the temple. Now you should ask her who she is.

Enter the door to the right. Go through the "door" and continue to the right.
Look at the dead body on the ground and talk to the zombie girls. Talk about everything possible.
It's important to ask them what happened to the prince, annoy them and ask for evidence that he's still there until the brainless zombies open up the sarcophagus. 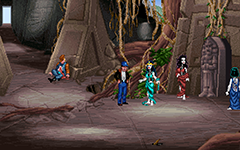 Take the mummy wrappings with you!
Talk to the ladyzombie again! She wants a reason, okay, so tell her you took something out of the sarcophagus.

Use your knive on the piece of sap and then take some of the sap with you.
Walk some steps. You reach a fountain that spills its water somehow out of order. This looks really crappy.
Move it so that it fits and take the blue gem with you.

Forget about the big lever by now and continue on on your way. You'll meet Ian. You can talk to him about how to find him, and then continue to the left.

Use your handpuppet on the hot disc so you won't burn your sweet fingers. Now go back to the lever. Push the lever. It's kinda windy, eh?

Back up at the huge Statue

Enter the door in the middle (the mouth). Use the disc from the statue on the pole that's coming out of the wall here. Now use the vine rope on the disc. After that go down one step in the same room (remember?) and there use the loose end of the vine with the wheel. Now stick your baseball bat into the wheel and turn it.

Enter the door that opened and take the pick with you.
Go back one room and let the stone back down on the ground by using the baseball bat again.

Go up again in this very room and take the back exit this time. The exit is very dark but it is there.

Look through the hole with the ray of light coming through. Use the pick on that hole.
Enter the hole. In that big room you must look at the coffin that is called crypt and then go back to the dripstoneroom.
Here you use the pick on the stalaktite. (Note: dripstones that grow from the ground are called stalagmites, the ones growing from the ceiling stalagtite).

Take that piece of flint that fell down and put it into your lighter.

Go back to the giant statue.

Enter the left door this time.

Go on until you reach the white snake.

This mean animal won't let you pass, and gets angry if try though. But there are always ways and means.
Build a torch out of the mummy wrappings and the armbone. Light this torch with your now working lighter. With this burning torch you can get rid of the snake.
You now reach the room with the waterfall! Here you go to the right side and come to a place you have already been to. Look at the dead body and find half a statue and an ID Card.
Follow the path until you reach the laserdinos. Now go one room further one more time. 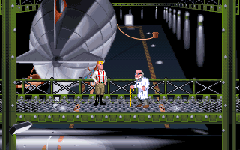 Anderson is cooperating with Dr. Ironstein and this starts gnawing on his conscience.


Continue on your way until you reach the double waterfall.

Take the big stick with you. That Stick! And now go back to the laserdinos.

Here you take the lower path, say you DON'T go up the stairs and you will come into the lavapitroom. 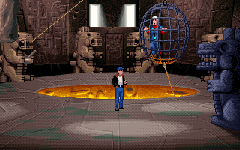 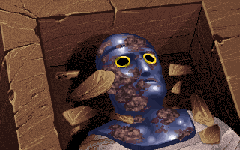 Enter the middle door to the dripstone room and go on until you reach the sarcophagus. Use the big stick on this thing. Now take a look inside!
You will get a deathmask. That's kind of cool, but dirty. So use the rest of the mummy wrappings to clean the ancient death mask.
Now go back to the huge statue and through the right door until you find the tree with the hole and then get down there.
After you took the sap with you, you go left to where the hot disc was and now a stoned Ian is. Take his part of a statue with you. Use the treesap on this statue and use it with the other statue from the other dead guy.
Take some more tree sap with you and then go back up to the laserdinos.

Use the deathmask with the laserrays coming out of the dinoheads here. Now you can pass without any danger.

So you want to have that blinking green juwel? Just use the treesap on the baseballbat and then use this fishing rod to get the juwel. Now go to the double waterfall.

Here you use your own little statue you just built out of the two broken parts. Just stick it in and guess what, another secret passage.

This takes some time but the solution to this riddle is quite easy, just give some Cheeze Bitz to the dinorat and follow it until you are out of the labyrinth.

Read the markings and walk through the door.

If you don't want to search a lot, the first symbol is in the bottom column, the second from the left, the one that looks like a "H" with the lower ends like |_ _|

The second symbol looks like a 31 and is in the second column from the bottom the second from the right.

after you managed to open the door go in! 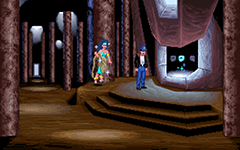 Talk to the hololady and tell her that you are Joe Almaxaquottl. Now this old woman wants to have a key from you to prove that you are who you claim to be. So give her the crown of the real king. Now take the skull and head back to the thronehall of the amazones. By the way I wonder what all these people there have been up to while we were in the temple...

Push the Throne and the 2 patterns to activate the whole thing. Now sit on the throne and enjoy the cutscene