Valley of the Mists
more games

Valley of the Mists 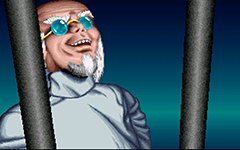 Take the mug behind you and use it on the door.

After another cutszene you go straight to Trader Bob.

Buy his alcohol in the bottles in the shelf on the right side! Just pick them up, after some discussion you get them.

Now you can use the wet commander Rocket coupon with the other Commander rocket coupon. You get one of the parts from Skip the explorer's comicbook in the jungle and the wet other half is found in the seats of the Amazon Queen.
And after that you can fill the alcohol into the jetpack and march towards the pinnacle 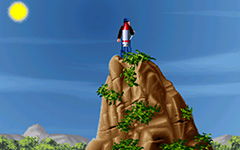 Start your engine and jetpack and fly to the valley of the mists.

Valley of the mists

Well, it's not THAT misty here. Well, Faye is here to, so just follow her. Oh, she's gone pretty fast. 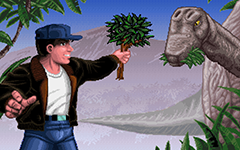 So, there is a huge Dinosaur blocking the way. So what can you do here? Just go to the distant clearing near to the dino's head and there you go one step further to see some plants the dino is eating at the moment.
With the help of your knife you can cut some of the branches.
Now go back to the dinosaur's (a brontosaurus, iirc) head and feed the branches to him. Dino branch-brunch!

Continue on your way now, they are waiting for you!

After the little dinos went away from their prey (look at that, a rhyme) there is an even more dangerous dinosaur coming.
Okay you just show him who's boss and use the tyranny horn. Of course he thinks there is a real tyrannosaurus rex on its way and will be gone for good in a second. 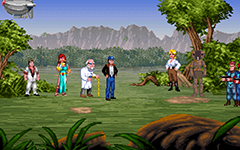 After the introduction you can either watch the 2 fighters for some time or you take action.

Once the fight gets boring for you, take Frank's dinoray gun and shoot at the mutated Dr. Ironstein, who is suprisingly called Frank now. But who cares, it's all going wrong of course.

So talk to Faye and ask her to turn her mirror around.
Shoot again, and see what happens.
Okay, so give the deathmask to sparky and shoot at Frank for the last time.
Your dinoray shot get reflected a thousand times and finally reaches its aim. Now, when I say last time and finally you probably already know what's going on now, well, yes, you have reached the 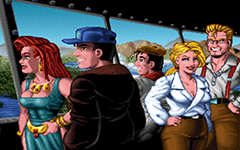 Valley of the Mists