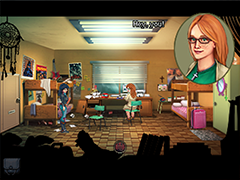 So Kathy comes home and is a bit drunk. Her roommate doesn't let her sleep and tells her that her grandpa just died. So Kathy better falls asleep now. The next day you turn off that annoying alarmclock and then leave for the funeral. 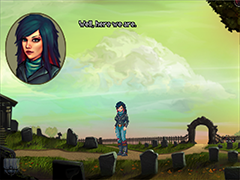 So Kathy Rain comes home to her birthplace after a long time to bury her granddad. Just walk over to the burial and listen to the calming words of the priest. After the ceremony talk to Mrs. Rain, your grandmother. After getting familiar with her you have a new spot on your map, the Rain Residence. After rejecting the priest pick up your bike and ride to your grandmother's house.

Enter the living room and listen to your grandmother's stories. This is all important backstory for the plot and your investigations so get familiar with the controls when investigating. Just check off the topics you want to know more about on Kathy's notepad. To be in the know you should check out every topic. But then, you are reading this great walkthrough, so I will guide you to the right places anyways...
After asking Grandma everything about the incident the Sheriff's Station gets added to your destinations, so you should go there and investigate further about what happened to Grandpa. 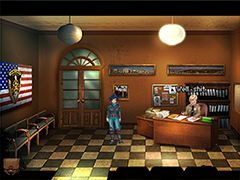 At the Sheriff's Station you sadly can't just walk in on the Sheriff but have to deal with Lenny Marks before. So ask him about the incident in 81 before he refers you to the Sheriff. Now it is getting interesting. The Sheriff is a grumpy tough guy, but talk to him anyways. Ask if you can see the police report and get rejected, no matter what you say. Lenny won't help you here, not even when you talk to him directly. As Kathy says, you have to take matter into your own hands. 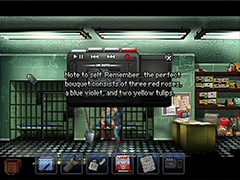 So open that double door in the background and get through it. Kathy has such good timing, she only enters once Lenny turns around and talks to the Sheriff and can't see you entering the jail.
Behind the double doors in the Sheriff's station is a bum who has very bad excuses, but also bad hearing. So first turn off that small TV, so he can hear you. Talk to him and ask him to distract Lenny. Leave the jail and Lenny will go away to look after his guest now. In the meantime we can scan those files behind his desk and read about some mysterious happenings some years ago in which Grandpa Rain was involved. The tape grandpa had with him should be useful, so Kathy already has that key to the locker where it is now.
Enter the jail the same way you did before while Lenny is talking to the Sheriff and open those evidence lockers on the right end of the room. Use the dictaphone and listen to your granddad's thoughts. He mentions the attic, so the attic gets added to your list of topics and Kathy should get back to the Rain Residence. 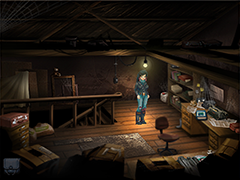 Ask Grandma if you can take a look at the attic and she will lead you upstairs. Try to switch on the light or take a look at the lightbulb to find out it is burnt out. Get downstairs and take the lightbulb from that table lamp next to the telephone. Back in the attic use the new bulb with the broken one to replace it and finally turn on the light. Take that book about maths and take a look at it.
Remember what your granddad said on the tape. The perfect bouquet consists of three red roses, a blue violet and two yellow tulips.
The colors of the flowers are the colors of the bookmarks and the number is the number of numbers you take from these pages. Combined these numbers form the combination of the locked briefcase on the left end of the attic. Got it? No? You want the perfect solution while reading this solution without using your head a little bit. Okay then, you asked for it, just use 235131 as a combination on the briefcase.
Open it and take the envelope with you. Curious as we are we take a look at that envelope now. You find 2 pictures, a newspaper clipping, a key and a tape.
Take a look at the Photo of Soldiers to find out about the McConnell Airforce Base and take some notes about it on your notepad.
Also check out the newspaper clipping to read about the drowned teenage girl and take some notes about this too. That poor girl will keep us occupied for some time now.
Finally put the new tape you found into the Dictaphone to hear some old messages from the Rains' answering machine. Besides Kathy's mom screaming on it someone called Cocky called, so Kathy also takes notes of him.

Get back downstairs and talk to grandma again. Talk about everything with her and especially about this Cocky person. She gives you the clue it might be an Airforce call sign, so maybe we should investigate the airforce base now. Get out of the living room and use the phone and phonebook. In the close up view of the phone search the phonebook for the number of the McConnell Airforce Base. And now of course use the phone to call the McConnell Airforce Base. Talk to the soldier all you want, but especially ask him about the Cocky callsign. This gives you a hint to the rich Charles Wade. But investigating further from here is no good. 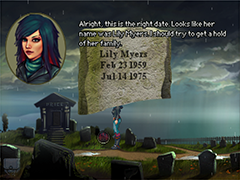 So we better just head off to the cemetery again. There is a little boy hanging around here. Talk to him. He is not that talkative. A bit like Kathy herself... He claims his mother is around somewhere, but only Kathy is here... As soon as you get away from him and come back he will be mysteriously gone. But since we are here already we should take a look at all these graves around here. Especially the one tombstone exactly to the left of the mausoleum. This is the grave of Lily Myers. The dates fits, she is the girl that drowned and is mentioned in that newspaper article.

Get to the police station instead now and ask Goober, the bum in jail, to distract that poor Lenny again just like you did before. Then use Lenny's phone to call the McConnell Airforce Base again. This time ask the soldier about Charles Wade and pretend to be a cop. He sees on his side that you call from the Sheriff's Office and thinks you are indeed a cop and answers you. Act as if he was sexist towards you and he will tell you everything. He will give you the number of Charles Wade. And you should call this number now, but the woman at the other end of the line is not very friendly and doesn't want to talk to you.
And since we know the name of the drowned girl we can snoop around in the files some more and find out more about Lily Myers and the circumstances of her death.
And who else could know more than grandma. Go to the Rain Residence and ask grandma about Lily Myers. Of course she remembers the whole family and tells your everything about their tragedy. Now we only need to find out where the Myers family lives. So just get to the telephone and look up their address in the phonebook. 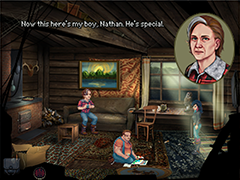 Now we pay a visit to the Myers family at the new location on the map called Lakeside Cabin. Knock on the door and talk to Mrs. Myers. She is a bit pissed but also talks a bit before closing the door on you. But we haven't found out something new yet, so knock on the door again but don't talk to her, rather offer her some cigarettes via the pack in your inventory. After they have a smoke together Kathy can enter the cabin at the lakeside and also meet Nathan, the special kid. But we now rather want to talk to Mrs. Myers again.
Take a seat on the couch and talk about everything. That weirdo art collector is added to Kathy's list instantly, but you should investigate further. Ask her about that art collector and then show her the photo of the soldiers and she will pin down the art collector as Charles Wade. In case you haven't called the Wade Residence yet, do so now from wherever you find a telephone.

Afterwards you go home to your flat and your roommate annoys you. After some sleep and a nightmare about abortion (does this have anything to do with the little boy on the cemetery?) it's a new day to go investigating.