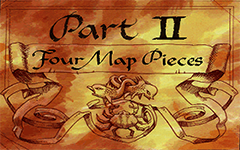 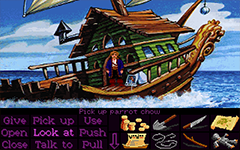 On the way to new shores with the Jolly Rasta pick up the parrot chow. Now enter the boat and speak with Captain Dread and ask him what your choices are for where you can and want to go to reach new shores.
So ride to Booty Island and enter the small house on the left of the screen. That's your local dealer for everything antique and pirate memorabilia.
You could buy the saw, the ship's horn, the sign which says "Beware of the parrot", Rock n Roll memorabilia and hub caps, but you don't need it.
Just buy (in contrast to the hard riddle version of the game) the first mappiece on his counter for 100 pieces o'eight. 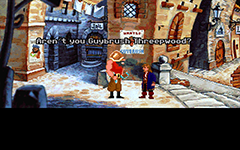 Now leave the shop and get back on your ship and sail to Phatt Island.
You are greeted very friendly and the governor Phatt of Phatt Island even meets you personally. The bad news is he wants the bounty on your head, set by LeChuck. After that he throws you into jail.
So how do you get out of here and don't end up like you neighbor in jail? 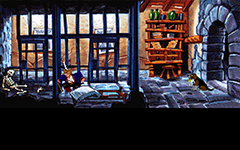 At first you throw down that strange and probably smelly mattress from the bed and pick up the stick you see now.
Guybrush is the Bone Master and flips over the bone from the dead prisoner in the neighboring cell into his own and take it with him. Offer this none to Walt, the drooling key dog. Pick up the key he traded against the bone. And with that key you can open the cell door really fast.
Outside of your cell you pick up the the manila envelope and open it to get all your inventory items back you had before getting jailed. 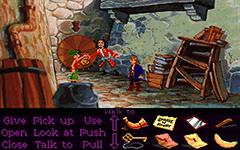 But for now enter the alley to the right of that poster and to the left of the library. You find some illegal gambling there, so guess on any number you want and get the invitation to the governor's Mardi Gras Party. Yay!
You can get every price only once and only the party invitation is important. Now leave the alley. 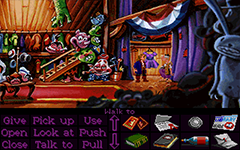 And now we want to meet Governor Elaine Marley. Just walk into the costume shop on Booty Island and get your costume by showing your invitation to the Mardi Gras party. And of course Guybrush gets the best costume of them all. Well, it's Mardi Gras, so what!
So let's get to the guard before the Governor's villa. 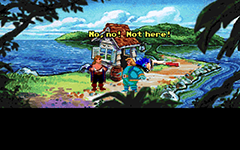 After Guybrush got himself together again you can impress the stupid guard lady with your invitation and your beautiful costume and then let's rock that party!
The party is pretty lame but there is a map piece really close! Grab the map piece from the wall and then let's get out of here. Sadly the dog with your name has a pretty good nose and the gardener catches you and brings you to Elaine. Then you have to sweettalk to Elaine a lot until Guybrush still messes up everything. So Elaine throws the map piece out of the window. So let's get after that map piece and get the second mappart. 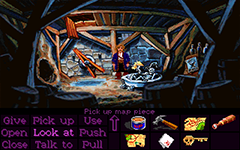 Now take a ride to Phatt Island.
Get to the waterfall in the northwest of the island. Enter the hole in the mountain and follow the tunnel behind it until you reach the cottage at the end of the tunnel and then enter the cottage.
So what do we do in this rundown house? Just walk all the way to the left and open the trap door.
You land in front of the 3rd map piece. Just take that map piece from the poor guy in his tub and then go back to Scabb Island. 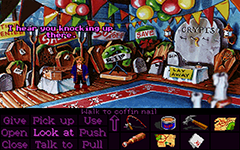 Now you drive to Scabb Island and visit the woodsmith. Just enter his room and steal his hammer and some nails.

Sail to Booty Island again. This time enter Stan's used coffin shop.
Talk to Stan until he jumps into his own used coffin.
Close the coffin and Stan will shortly pop out one last time and give you an important item, the hankie. After he is back in his coffin use the hammer or the nails on the coffin and he won't bother you anymore. Now you can take the crypt key with you. 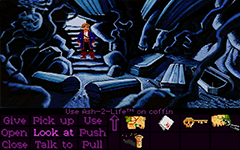 Now get to the cemetery on Scabb Island.
Open the only crypt around with the crypt key (all other crypts are just tombs). Then enter this crypt and open the coffin of Rapp Scallion said.
And voila, there is the 4th and last map piece already.

All map pieces here, so what now? 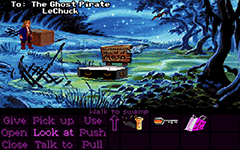 And now you have all 4 map pieces!
The only one who can help you now is a cartographer. Luckily there is a cartographer on Scabb Island. Wally B. Feed, the guy right around the corner in Woodtick.
So pay a visit to him and in case you stole his monocle give it back to him. And now, you can give him all your collected map pieces and ask him to put it together to only one complete map. And while he is working Wally sends you to the Voodoo Lady to fetch a Love potion for him. Let's do this now.
Now Wally gets kidnapped by LeChuck. This is a bad thing. Luckily there is a new crate in the swamp now. It is even addressed to LeChuck. So open this crate and climb in, wait for the parcel service and there we go.