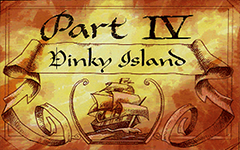 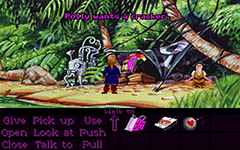 And finally we reached the island that is home to the huge mysterious Big Whoop. Dinky Island!
At the beach you grab the crowbar and the crackers in the barrel. Open the barrel before you can actually get the crackers. Give one cracker to the parrot and he will give you a way description which you should remember. Now get into the jungle, go east and you will reach a pond. Pick up the rope that is tied around the box and open the box with the crowbar. Take the dynamite inside the box with you. Ah, well, light it already with the matches, that doesn't matter. 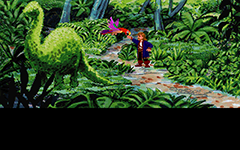 Now follow the direction the parrot gave you two times. When you reach the dino the parrot appears again. If you offer him another cracker he will give you more directions. 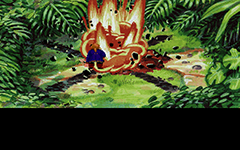 Once you reach the pile of rocks you feed the parrot another cracker and finally he tells you the path to the X that marks the spot. Once you are there you dig a hole with the shovel and then bomb the rest of the X with the dynamite. 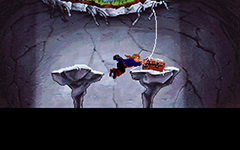 From that stone pillar you want to swing over to the treasure, don't you? So knot the crowbar to the rope and throw it up to the metal bars and swing over like Indy would do.
And so we are back at the beginning but not yet at the end. Isn't this philosophical? New Herman Toothrot would be proud of us. But let's continue with the game... 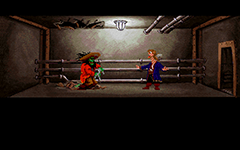 LeChuck is now planning to finish you and made himself a Guybrush Voodoo Doll. He starts torturing it and this teleports you around. 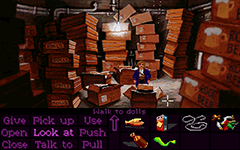 There where you land now you get through the door to the back. You should land in a room filled with boxes. Open each and every box and take something from every box until you have a bottle of root beer, a balloon and a small doll. Get back to the hallway and to the right, to the first aid. Pick up a bone from your parents. And these are LeChuck's parents too, if he is indeed your brother as he claims. 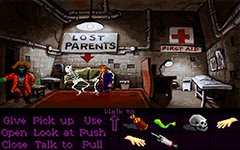 Take a look at the trashcan in the first aid room, open it and pick up the stuff in the trash that happens to be a pair of surgical gloves. Now open the drawer and take the hypodermic syringe inside with you. 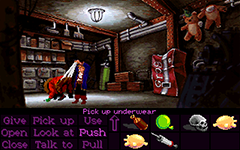 Now get to the room with the grog vending machine. Blow up the balloon and the 2 surgical gloves with the helium tank. This makes you lighter and thus you can use the elevator now. Also use the coin return on the grog machine. A coin will drop out of it. Wait for LeChuck and he will see the coin and show you his backside. As soon as he bends over grab his underwear! 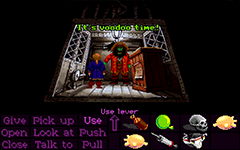 Now enter the elevator. As soon as you get in LeChuck appears. As soon as he is inside you push the lever to start the elevator. The elevator starts going up and cuts off LeChuck's beard. Pick up his beard bits and also look out of the door. This looks hauntingly familiar :) 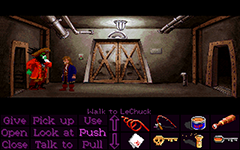 Now drive the elevator down again and wait for LeChuck. When he arrives hand him the hankie you got from Stan before nailing him. 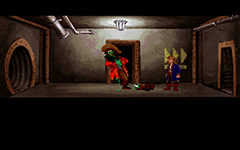 Now we have all the ingredients for a now Voodoo Doll. Stuff the beard bits, the hankie, the underwear, the skull and the generic puppet into the juju bag and voila, we have a Voodoo Doll of LeChuck.
Ha! Search for that spitting slimebag and sting the syringe into the doll. That's nice. Now search for him again and the rest will play on its own. And please don't be too confused about... 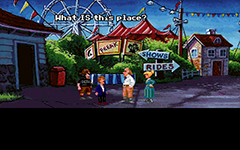