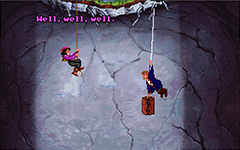 You can meet Guybrush Threepwood in the strangest places. For example, hanging from a rope above a huge abyss. Luckily there is still Elaine there for him. It is still unclear if she wants to safe him though. In the End Guybrush starts telling his tale and how he got into this unfortunate situation. After all monkeys are gone Guybrush can take care of his "Fans" and tell them the story they can't stand hearing anymore and motivate himself to talk about a new adventure.
Sadly he is just at the beginning of his new and bigger adventure. After some jokes it becomes clear, that Guybrush is after a treasure, the biggest treasure of all times, Big Whoop! And there where are in the middle of the adventure about fame, honor, love and a lot of monkeys already. 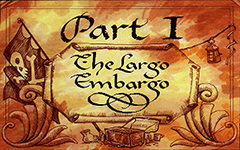 Now Guybrush is standing on the bridge to Woodtick, the town on Scabb Island. Look at your inventory and be happy, you, well, Guybrush is a rich man!
Before crossing the bridge take a look at the sign on your side of the bridge. Pick up the shovel attached to the sign. No matter what direction you go to, you will meet Largo LaGrande, the short pirate that just happens to mug you and take away all your riches. Well, bad luck for you Guybrush, and now we are right in the middle of the adventure. 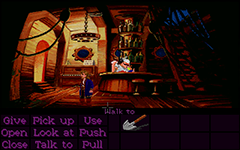 Next you enter the Bloody Lip Bar, this is the bar at the bottom end of the screen. Talk to the barkeep and ask him for Grog. He will mention Captain Kate and say (like everyone on the island) that someone should make a Largo Voodoo doll. So, getting a hint of your first step in this adventure? And as soon as he mentions Largo, this person comes in and orders a drink. And he gets it without having to pay for it, it's even better for him as he gets paid for it. So just remember the color of the drink and and also the color of Largo' spit.
You can't access the kitchen of the Bloody Lip Bar from here. For that you need yet another Monkey-Island-how-do-I-get-into-the-kitchen-unnoticed-trick. Just leave the bar and climb in through the window outside. Here you can grab the knife and you can get ignored by a French pirate cook. 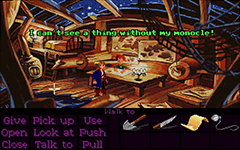 Now leave the bar and continue your way to Wally B. Feed, the cartographer on Scabb Island. He lives in the second house boat from the entrance to Woodtick. You can get a lot of interesting knowledge from him, especially about Big Whoop, the legendary pirate treasure that you are planning on finding. He explains everything about the four pirates that buried it and the map, that was torn into four pieces.
After talking with Wally about anything and everything just stay with him and watch him for some time. After some time he puts down his monocle. Steal it. That's just mean, but I mean it and it is very helpful.
Now take a piece of paper with you and then leave Wally B. Feed.
Get back into the Bloody Lip Bar now and collect Largo's spit with the piece of paper you just stole from Wally. 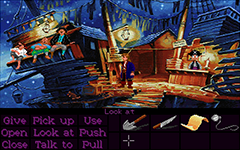 Now get to the ship that's a bit in the background in Woodtick. On the very left end below the 3 pirates you can find a bucket. Take it with you. In case anyone is acting up just ask him, if it is his bucket. Then talk to the Men of Low Moral Fiber (pirates). They are the same gang you know from Monkey Island 1 already, but they seem to not remember you.
Maaaad Marty, the owner of the laundry here is a bit deaf but nice, and he gives you interesting and a bit cryptic information. For as much as he understands of what you are saying. 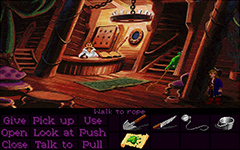 Enter the houseboat hotel on the very left of Woodtick now. There is only one room in here and it gets even worse, this room is not available to anyone. Have you seen the small and nervous alligator lizard thing? Pegbiter is quite peaceful by now, but what would happen if you let it lose? Well, just try it, just cut the rope holding the alligator with the knife from the kitchen.
Pick up the Cheese Squigglies from Pegbiter's bowl and then enter the only room in the inn. You can get in here now without any problems. And this room is rented by Largo La Grande.
And as you are in here now hurry up and pick up the toupee, Largo might be coming back soon. There is not much more you can do by now. 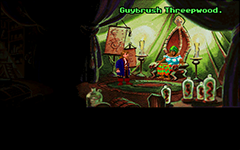 Now leave the quiet and nice town of Woodtick. You find yourself on the map of Scab Island now. Go to the swamp. That's the river delta on the right of the map.
Enter the floating coffin and row along the swamp river until you reach a hut. Row into it :)
Get the string in here, it is located next to the skull in the background. Then walk on and meet an old friend, the Voodoo Lady. You talk about Largo with here and then she has the idea, that a voodoo doll of Largo would be the best thing to do.
The thing is, she need some ingredients for the voodoo doll. Some very personal ingredients from the person you want to have a voodoo doll from. 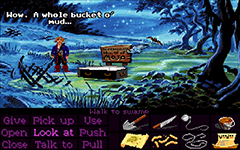 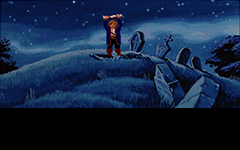 Now get back onto the map and continue to the graveyard. You will find what you are searching for at the graves on the hill. The only grave that is clickable is the one you need to dig into now. Some of Largo's ancestors lie here. Use the shovel to dig for them now. 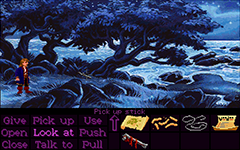 Get back onto the map of Scabb Island and go to the beach.
Pick up the stick you find on the ground. If you want to you can join your pirate friends and hang around with them and have some marshmallows at the campfire. 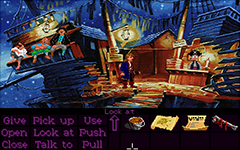 Then get back to Woodtick.
Get to the Men of Low Moral Fiber at Mad Marty's laundry ship. Below the place where the pirates hang around and where the rat is running around is a box. Open the box, stick the stick from the beach in there and tie the string from the Voodoo house to the stick. Tie it to the stick, not to the box. Finally put the Cheese Squigglies into the box and we have a rat trap. And the rat seems to like that cheese even though the Munster Monster probably prefers Munster. Step away from the trap and the rat will get inside the trap. Pull the string and you finally caught the rat. Open the box and take the rat with you. 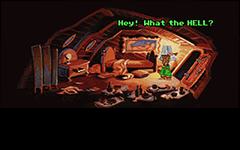 Now enter the hotel with only one room again. And of course enter that one room. Once you are inside you close the door and put the bucket filled with nice sludgy mud on top of it. Oh, this is nice. After Largo got covered in mud from head to toes you leave again and head to Mad Marty's laundry. Here Largo has some serious issues with Marty and orders you to pick up his clothes. Yes we want to do that. 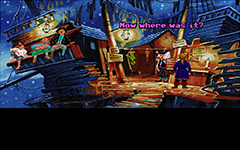 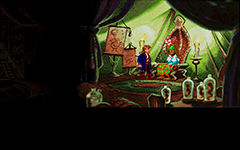 Get back into the swamp and give her the bone of Largo's grandfather and the Pearly-White Bra as the last parts for the Largo LaGrande action figurine, ... sorry, Voodoo Doll to the Voodoo Lady. Armed with the voodoo doll you want to go back to Woodtick and find Largo in his hotel room. When he wants to kick you out you penetrate his voodoo doll with the needle. Now he will think twice before messing with Guybrush Threepwood again! Oh, well, Guybrush screws up and lets Largo escape with LeChuck's beard and doesn't stop him again with the voodoo doll right in his hand. Now the evil pirates can revive LeChuck from the dead. The Voodoo Lady is the only person that can help now, she tells you to find Big Whoop now. She gives you a book about Big Whoop that has clues and directions on where to find the parts of the map to Big Whoop. But of course it's not that easy.


We need money and a ship! 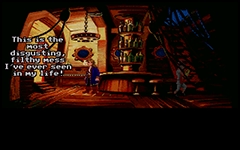 Enter the kitchen of the Bloody Lip Bar once again and drop the rat in the Vichyssoise. Leave through the window and enter the bar normally. Ask the barkeeper how the stew is today. The barkeeper himself tastes the stew and of course he finds the rat in it. So he kicks out the French chef and has a job to offer. Of course we take the job and earn mad cash. And the best thing is, we don't have to work for it, rather we just escape through the window. And now we want to meet Captain Dread at the other end of the island. Ask him if you can charter his ship, but he won't leave without his lucky charm, so we have to get it for him. Maybe he likes Wally's monocle. Of course he does, and we are rich, now we can start rocking the Carribean.