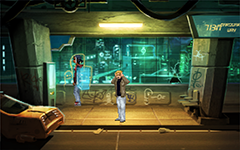 The Intro starts with some guy who might or might not be the Mindjacker talking to some other mysterious figure about their plans.
And they sure have evil plans, so this is going to be big. Really big. But sadly this intro tells us nothing really interesting, besides introducing the main villains of Technobabylon that we will meet again more than once but don't know exactly who they are at this moment.
And the intro is not even interactive. But the intro is short and over soon and we can finally start playing then. 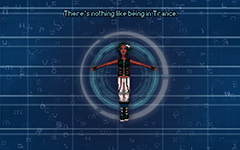 And there we are with one of our protagonists called Latha Sesame drifting and surfing through the virtual reality of the world of Technobabylon called Trance as her virtual alter ego called Mandala.
But sadly the worst case happens just as we visit her, her connection gets interrupted. And now she has to take care to get her connection to the slightly addictive Trance running again. Everybody needs a hobby! Check your inventory in the bottom right, as the game tells you, and click the Trance EXIT button in your Trance inventory to finally leave Mandala's Trance Hub and enter the real world in which there is nothing to be afraid of, or is there?

To reconnect the Trance connection you actually have to do it, you finally have to leave your apartment and contact the building manager. The door to the outside world should actually open when you use the terminal to the right of the door but it seems like this thing is broken too. Or did someone lock you in here? Well, so we will have to improvise some more and get this point and click adventure game running! 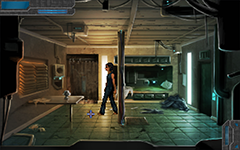 At first you should collect some items from all over your room just like: The Trophy from the table and the wetware from the wetware still in your toilet/shower behind the shower curtain.
Now take a look at the food machine on the left side. Once you are in the close-up mode plug your wetware into the memory card slot and establish a connection to it. Take the memory card in it with you by clicking the MEM. EJECT button.
Leave the foodmachine and after all this is done you plug your wetware into the terminal at the door and now you can access this CPU via the Trance Uplink. Now it is time to enter the hub to the trance again by using the Trance button in your inventory. At first open your mails. Just click on the letter icon in your Trance Inventory. There is quite some spam in your inbox. The Mail from EXS PHARMA has a very suspicious attachment, so just download it to your hub and close the mail client. Of course this mail attachment is malware, so don't access it. Rather use the Door Panel icon on the right and talk to the knight, ask him some questions, especially what he does and if he can let you out of your own room. But he can't but he tells you that you need physical access to the door terminal to open it. 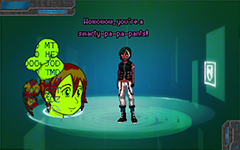 Well then, you better talk to Cheffie now, your friendly Chef from your foodmachine you are linked to via the wetware. You can ask her some questions and complain about the food. Leave her and upload the malware to the memory block you got out of the food machine. Exit the Trance for a moment now and plug the corrupted memory block back into the food machine. Now reenter Trance and talk to Cheffie again. Complain about the food and ask her what's on her memory card to make her read the malware. This screws with the food machine of course. For some laughs you can talk to Cheffie some more. After you are done, talk to the knight again. Tell the nice knight and security guard that Cheffie is infected with a virus and the knight takes care of Cheffie and gets rid of her. Finally!

And there Cheffie is gone and no one is stopping you from doing funny things with the food machine. But to not only recycle plastic but to receive something useful from the machine you need some more material that the machine can transform. Put the odd trophy into the recycling hole on the upper part of the food machine. Now enter the food machine interface and push the button with metal on the food machine next to the 3D printing. This switches to metal printing of course. Select one of the 3 meals (that are unreadable now because of the virus) and receive a shiny metal tray and an even shinier metal fork. You can use the metal fork to pry open the terminal next to the door and short-circuit the terminal to finally open the door to freedom!

The Mindjacker, who is planning and orchestrating this part of the plot, seems happy that Latha's apartment exploded in the background...