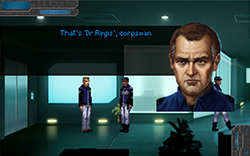 After a trippy dream the blackmailer calls again. As Regis is a CEL Agent he traces the call to a terminal in Vickerman Pharmaceutical assigned to Dr Adam Baxter. Did he really do this? How could he?
Dr Regis records a message for Dr Lao that we will soon decipher in complete, but first, try to leave CEL HQ for Baxter, but you get interrupted.
A corpsman needs your help on another job. So take care of that person the corpsman told you about. Walk all the way to the right and enter the cell. Now that is a familiar face. 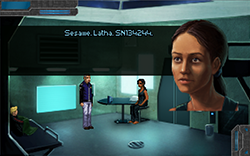 Latha is secured in the holding area of CEL, so she can't run away from you anyways. Interrogate Latha through all conversation topics to feel even more guilty. After some realization Regis leaves and you continue playing as Latha Sesame.
As your first step alone in the holdingarea you take the blue cup with you. Fill it at the water dispenser. Then put the rest of your wetware, called Residue this time, into the water. Pick up the papers from the table.
Then steal the sheets from the poor guy sharing the cell with you. As he is not very responsive and boring forget him for now and use the big terminal to call in the officer on duty. Tell him that you are hungry and he will even give you some tokens for the foodmachine. Use the tokens to get some food and a metal fork from the food machine. Throw the ugly food up to the camera to cover it and finally have some privacy. Put the rest of your food into the cup with the water and your wetware in it.
Use the tokens on the table base to unscrew it. Now it is free and you can move it around. But at the moment you need the table exactly where it is anyways. So climb up on the table. Use some material from the sheet to cover the fork in it. Latha handles this good. While standing on the table, smash the safety fork into the broken light to destroy it even more. You can now use the sparks from the broken light to set the papers on fire. Climb down from the table again and put the burning papers into the trashcan. And as this is a nice heat, put the blue cup with the wetware, the water and some food in it into the burning trashcan to boil and grow.
After 80 minutes your wetware is grown back. These are some very yielding papers that burn for 80 minutes. Use the wetware to connect to the huge terminal in the room. 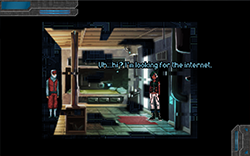 Now use the Trance button in your inventory to enter the hub again. Walk through the infowall to meet Jinsil who is also hacking around these parts of the network. Jinsil explains that they have an agent nearby, so ask her about the guy in the cell (inside CEL) with Latha. You can find out more by just asking. After you are done disconnect from the Trance.
And now use your wetware to connect to Guy, the guy with you in the cell. And back to Trance we go. Open the USR.GUY file to enter his neural hub.
Talk to the real guy and not the imposter. Ask him everything you can and what he needs to get out of that wall. He wants some epinephrine. Since you are locked in a cell inside CEL this should be easy to get, right? Right! Just pick up the virtual representation of the Epinephrine molecule and leave the trance. Then call in the officer again and tell him that Guy is sick and needs treatment. The nice officer brings along a Utility Drone. Open the Utility Drone and rob all its possessions while he isn't looking, like a Scalpel and an Auto Injector. And with the scalpel you can open up the old food machine. But the machine needs some updates before anything happens. But at least you get an optical module and the foodmachine's memory block. The table in the room has a Pull Table hotspot on both ends, so drag it to the right 2 times until it is below the dirty camera. In case it is still screwed to the ground use the food machine tokens to free it.
Climb on the table and open the camera with the scalpel. You find a High Grade lens inside the camera. Put the new lens into the optical module from the food machine. Then store the EPINEPHRINE.MOL file on the memory block from the food machine. Put the memory block and the optical module back into the foodmachine. Throw a token into the old food machine after that and receive your Epinephrine fix. Load the injector with it and hook up Guy with the load. 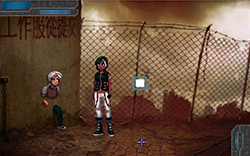 Enter the Trance again and meet Guy. He is still stuck to the wall but feeling better and tells you he has access to a Utility Drone that could help you. So get back to your own Hub and enter the security app. You control the drone in the Pathology lab now. You should know where this is and where the cell is, so just drive the drone out and all the way to the right, into the cell, where Latha is currently located.
The stupid drone just won't stand still so you have to use the blanket to trap it. Once it stopped moving get the laser cutter from the drone. Move the table all the way to the left and climb on it again. Now cut through the vent with your new Cutting Laser and you are free.